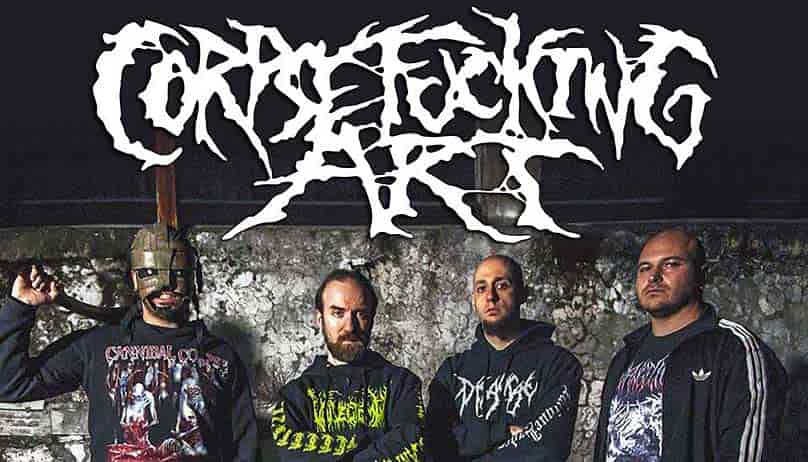 Formed in Rome in 1993 under a different name: Enthralment. The sound was a slow and brutal death-metal influenced by Immolation and Incantation. The years go by and name was changed to Corpsefucking Art and several releases followed. In 2001 an interview was done and now with the new album "Splatterphobia" it is time to have some talk again with Andrea.

Please give us a brief introduction of yourself and your bandmates?
Hi Twan, currently the guitars are played by Mario (Devangelic, Vulvectomy, etc.) and me, with Marco (who has played with us since 2000 already) on the bass, and Francesco on the voice (who enjoys to perform as Mr. Daisy live). Soon, we’ll introduce a new drummer, already trained and ready.

Reading back the interview we did in 2001, do you regret? Or did it open doors?
I’ve always been away from pre-set paths, at that time it was the best way to represent my struggle against fashions and the modern society.

Regarding your bio the band was formed in 1993 and WOW, this is centuries ago. How do you look back to those days?
In these years, death metal utterly devoured me, an unfathomable descent tossing you to hell.

After several years you decided to switch to ultra brutal death metal. Why this switch? After hearing certain bands?
Actually, that was a natural evolution, closely following my listening choices. I’ve never hidden my influences, instead I’ve always drilled them down to my playing style.

Was it difficult to switch regarding the musical structures and intensity of the new chosen path?
It’s not about choices, art is an expression, a need urging within the artist, something intrinsically changing. I’ve always followed my instinct and the here-and-now inspiration.

What follows are several labels and releases and a tour in the USA in 2014 as the highlight. What do you remember from that tour? What were the likes and dislikes?
It was quite a fun experience, and very positive in the overall. We met so many nice people, a lot of them were curious about our origins as well as a lot of death metal enthusiasts following us for years. Food and the freezing air conditioning apart, the remaining is to be repeated again for “Splatterphobia”.

And of course there must be some nasty tour stories to tell from that trip? Make us insiders of those stories!
No nasty stories at all, eheh!

Although CFA play serious music the lyrical and visual concept is sometimes hilarious. Why is this? Not afraid people will take it serious?
Lyrics are extremely serious, they’re just masked as fun. If you wish to represent an insane character through his thoughts, you can only build surreal realities.

So humor is important and therefor you must know some great joke to tell!
I know a really fun joke, but everyone experiences it on their own.

The mascot of the band is a tomato. An angry tomato! Who came up with the idea and why this vegetable?
The band’s mascot has always been Mr. Daisy, the tomato is just one of the characters from his mind, within his imaginary world tomatoes reign over mankind. I like to see common things becoming something else, in order to try seeing everything from more perspectives.

I think it is hilarious and waiting for an album totally dedicated to the tomato and having song titles like 'Butchering Tomato', 'Virgins Stuffed With Pomodoro'...
Substantially, the place where everything happens as described in the album is set in a world ruled by tomatoes, using this for the titles as well you risk to make a cookbook.

"Splatterphobia" is a monstrosity of a release (as you can read in the review). Are you satisfied yourself with the outcome? Did it turn out as expected?
100% satisfied, both for sound and for artwork.

How did recording go? At home or in a studio? What were the difficulties you faced? And what would you do differently the next time?
Guitars have been recorded at Mario’s home, the remaining parts of the recording have been done at Hombrelobo Studios in Rome, the same place where we did “Cimitero Accanto Alla Villa”. I believe such studio-home compromise is perfect, and I don’t think anything’s going to change, music aside. 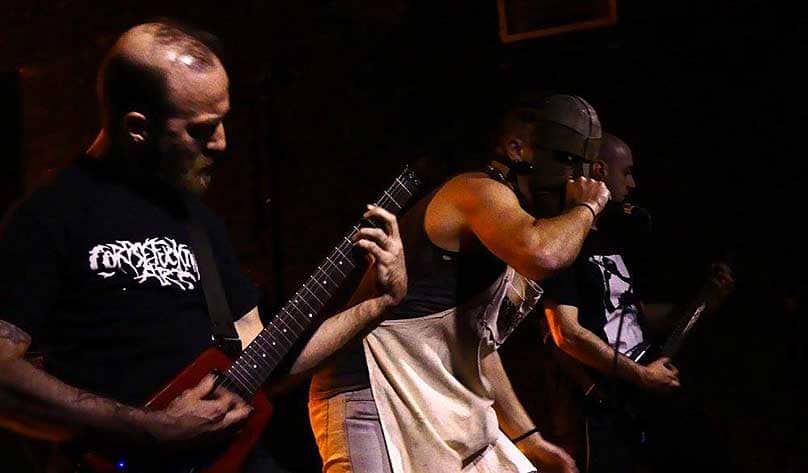 One thing I don't get is that the cover you did is a well known song (most likely have to pay huge amount of royalties to CC). Why this song and not a song less known?
This is tribute residing in my mind for years, the death album which influenced my guitar playing the most. “The Bleeding” is my sickness, the utterly perfect album.

What are your own favourite bands to listen to? Also listening to non metal music? Are you a collector of CDs or vinyl? And what is the fun of collecting?
My listening habits are very heterogeneous, but when it comes to extreme metal, it’s always the first wave of American brutal death to hammering my ears, Mortician, Cannibal Corpse and Incantation being the most frequent played bands. I am not a collector, but a music lover. Obsessive collection is not my glass of beer.

Beside being a rockstar do you have other hobbies (still collect pink funnels?) or have an interesting profession?
Am I a rockstar? Ahahaha! Pink funnels are always on the topmost shelf. I’ve been running an independent label for 15 years, namely Despise The Sun Records, so we can say it’s not just a passion, but also a way to fund all my artistic projects.

But we're talking about the new album. What are the next steps now it is released? Playing shows? Mario and you still playing on that little kids guitar haha?
Soon we’ll annouce our fist shows to promote the new record, and we’re looking forward to bringing on stage the new Splatterphobia songs. And yes, we still have those toy guitars ahahaha, they’re so convenient!

Francesco is wearing a mask, is this for your protection or is he ugly as fukk?
Besides being ugly, he prefers to cover his face to torture his victims. If his face was exposed, they could die instantly, and dismembering dead people would no fun at all for him.

Most likely I forgot to ask an important question so do any self promotion to close this little interview.
Thank you for the conversation Twan. It’s less surreal than the 2001 one, for sure, eheh.

Oh wait, give us a good recipe for a lasagne!
In order to eat a good lasagna, you should come to Italy, that’s a fundamental secret.
Band: https://www.facebook.com/sachertorture
Interviewer: twansibon
Jan 16, 2019
Next interview: The stinking vaginas and bleeding assholes in Lividity