Mass Infection want to thank you! 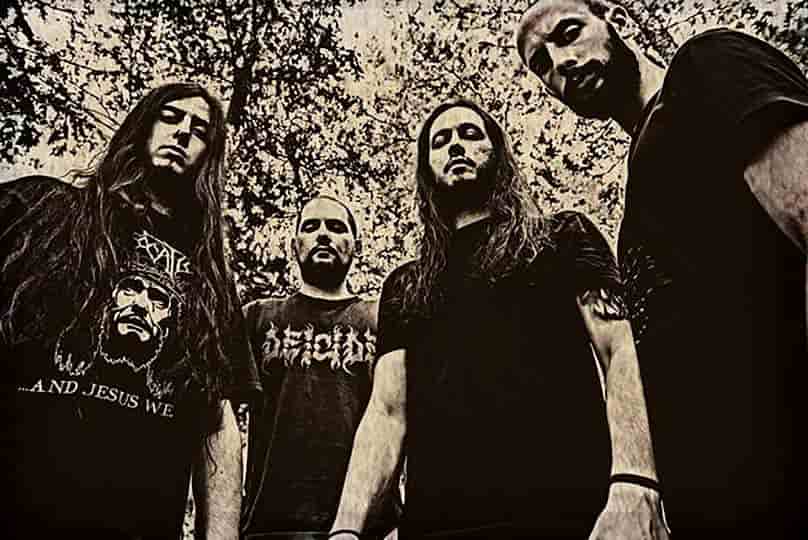 Mass Infection is a brutal death metal band from Livadia, Greece, founded in 2003 and being fully active ever since. Within nearly two decades of existence, they have released three studio albums and have appeared in numerous live shows all over Europe. At the end of 2018, Mass Infection unleashed their long-awaited fourth full length studio album, time to ask Nick some questions.

Please give us a brief introduction of yourself and your bandmates?
George and me formed Mass Infection in early 2003. We're both guitar players of the band and main composers. After many line up changes, John is our bass player since 2015 and behind the drumkit is Giulio Galati (Hideous Divinity) on our last album.

Malaka, "Shadows Became Flesh" is a smasher! Guess you only get positive feedback?
Yes until now we have a lot of positive feedback from all magazines, zines and individuals around the world. It seems to be our best album regarding feedbacks so far...

It took 4 years to deliver. There must be a good reason what hold you back...
All of these years since our last album came out (2014 "For I Am Genocide"), we had some line up changes. Also in our personal lifes we had some things get sorted out regarding our jobs mostly. Now we are back with a really fresh material.

All those years how did the band practice to progress? Rehearsing? Listening to other bands?
Mass Infection's rehearsing line was the stringed instruments at this time. George and me used to rehearse alone at most of this period. We had some riffs here and there and after hard work the final outcome is really enthusiastic.

Do you actually listen to other death metal bands? Old and new bands? Or do you have a wider taste for music?
Yes of course we are listening death metal. We're also checking new releases. We love the old and new bands as well and we are not stucked to specific bands or genres.

Writing new material, who is responsible? Can you describe how a song is shaped? Where is inspiration taken from?
Most of this album composed last year from George and me. The way we work on each album is the riff gathering. Most of them composed by George and some parts from me. After all we are trying to compose a specific track from start to finish. You know we are testing riffs/sound and we are focused on a specific motive we want for each track. Meanwhile we are making a basic drum machine just to have a more clear idea of what's sounds like and we send the stuff to other members. After all we are rehearsing and many ideas came out on every track. That's the way we are working on in every album.

Which offers where made to improve the quality of the music? Difficult to explore new paths in songwriting?
I think at this album we had new paths in songwriting mostly on the composing line parts. Hopefully this will be getting better and better through the years. We are trying new elements and that's really improving our skills.

When a song is ready to be rehearsed, where do you practice? At home? Studio? Is this with a drummer? Because Giulio is from Italy and traveling is not cheap...
Full band rehearsals is a little bit difficult as you told. It's the final step before recording or live appearance. We are practising at our studios (Infected Studios), and that's a blessing for us. Every band wants their own space. Nowadays our full band rehearsals are a little bit confined but we were never rehearse all together so often.

Album is recorded in Greece, did Guilio come over or did he send the drum tracks digitally? If he did send them isn't this difficult when you wanna change something last moment?
Giulio came to Greece for rehearsals and recording. It's difficult to produce the outcome you want and feel from distance. Drums were recorded and then we were moved on with other instruments.

I have the vinyl and the artwork looks great although I think it is printed too dark. Who came up with the idea? Maximos or you? What is the story behind it?
We had almost finished the composing when we talked with Maximos. He is a really talented painter and his outcome was exactly to the point of what we searched for. About dark printing it's a fault of factory. It's not something we looked for but it's borderlined ok.

Time to promote the album worldwide. Beside reviews there will be shows? Already where you gonna play?
Yes, we have some dates in Greece and a european tour later this year. All these dates will be posted as soon as possible through our website (massinfection.net) and social media. 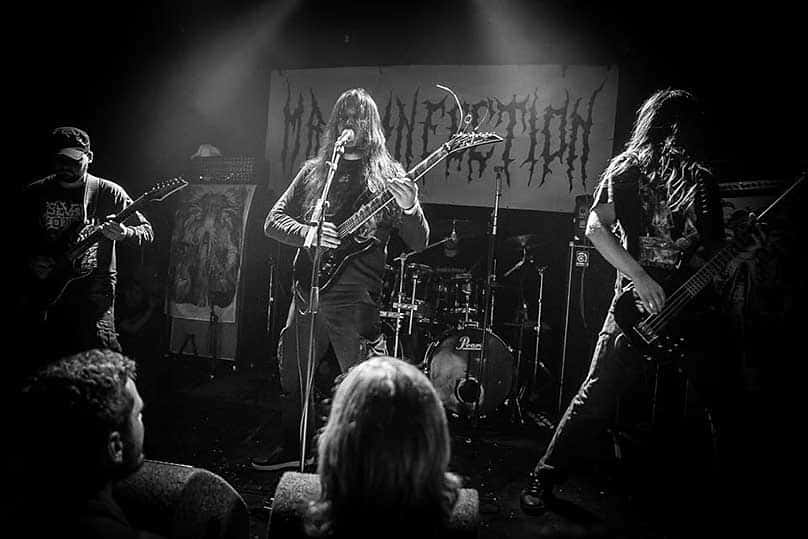 Done several shows/festivals in the past you must have some good stories to tell. Can you sum up good an band memories?
Of course our good memories are much more than the bad. We had great times all of these years and honestly I can't stuck referring specific moments. Bad times was usually during trips and not on stage time or festival areas.

Beside the band you must have a personal life. What do you do in daily life? Do you coworkers know you are in the band? What do you think about it?
At this time I haven't a regular job in my daily life. Mostly working like a freelancer on graphic/web design and sometimes as a bar tender. Yes they know about it and it's really ok.

Not only coworkers but also (grand)parents have to deal with Mass Infection. What is their opinion? Do they visit shows or listen to it on Spotify?
Haha no, not at all. They know about the band and how is this going all of these years. They are supporting and they are proud of it but just that. Nothing more.

Released in December 2018, "Shadows Became Flesh" cannot be album of the year 2019! So what are we gonna do about this?
Hmm, maybe just listening and mention this album is fine. We want to spread our music through the world at any time.

Most likely I forgot to ask an important question so do any self promotion to close this little interview.
Thanks a lot for the interview and your kind words. It means a lot to us. You can check our official site and store at massinfection.net for updates and merch.

Last rites to the readers?
We want to thank everyone separately who's showing support to us through the years. Hopefully we want to meet new people around the world in our next tour. Listen to Mass Infection and keep supporting the underground!
Band: https://www.facebook.com/mass-infection-129646357120635
Interviewer: twansibon
Mar 14, 2019
Next interview: The trance trip of Pressor