Introducing the fast-rising, brutal slamming death duo from the UK, Cranial Contamination. Here we chat to vocalist Will Willcox, welcome to BRUTALISM.COM! We have a bunch of questions to ask you, focussing around your upcoming album "Into The Warp", which is out very soon on Reality Fade!

"Into The Warp" will be your debut album. You've previously released two EP's (2017's "Engineered Human Obsolecence", and 2018's "From The Absence Of Existence"). What differences can we expect from the EP's compared to the album?
I think the album sounds a little more mature then our EP's but without losing our sound. The songwriting has improved and we've tried to do a few different things that we hadn't done it our EP's. Overall there's probably not a huge difference in the sound, we've stuck to playing what we like and tried to be creative with some of the riffs and patterns.

The album artwork is incredible, so much going on and quite mesmerising! Reality Fade seems to have a keen eye for the best artwork in death metal at the moment that's for sure. Can you reveal the artist to us and also describe what is happening in the image, and how it reflects the new record?
We sure can, the art was done by Aditia Wardana and we think he's killed it to be honest. We initially started with what colours we wanted, the red and purple and we already knew what the album was going to be called so we basically asked Aditia to sketch up this like giant space warp scene with loads of hideous creatures spewing out of it. The destroyed shuttle and the dude that's being eaten were some nice final touches, it's like he'd gone up there to check out this weird looking thing in space then realised he shouldn't have.. the whole album is a warhammer themed concept so lyric wise there's quite alot about space and alien life forms.

'Holy Terra' is the first single released from "Into The Warp" and it's an absolute banger! Will the album follow suit from this track, what else can we expect to hear from the other songs?
I think there's a good mix on the album; there's a couple of songs that have a similar structure to Holy Terra and a few that have something a bit different and then a few that have something a bit different again.. the album feels consistent but not boring, it flows without having the same structure track after track. Like most brutal death metal, you can expect slams, blastbeats and gutturals! 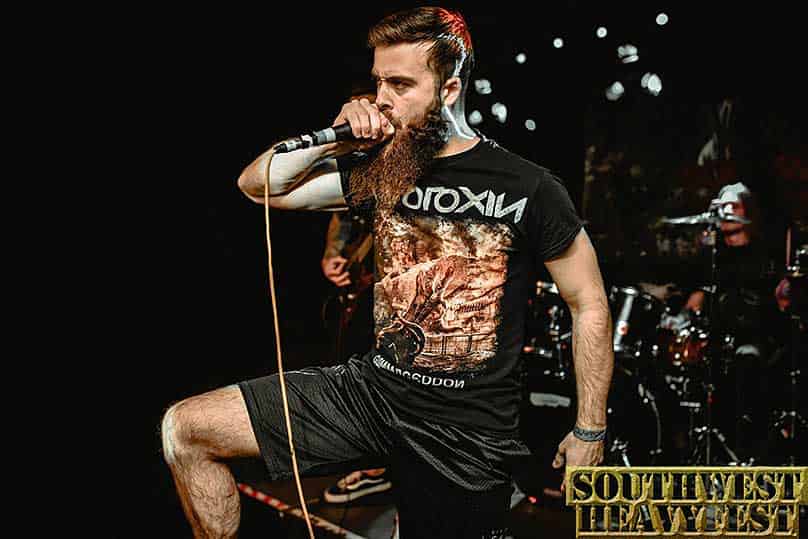 Assuming everything was recorded during the UK lockdown courtesy of Covid-19, how did the entire recording process work for you guys, was it tricky and where did it all take place?
It was indeed. Ellwood (Guitars and Bass) had been working on the songs for a while so we had ideas sort of ready.. then when we went into lockdown and not much else was going on we decided it was a great time to record. All the guitars / bass and vocals were recorded at Ellwoods house and then Ben (Visions Of Disfigurement) programmed the drums from his home and sent them across to us. We had a few 'technical' issues... (ie this was the first time we've recorded completely by ourselves) so the whole thing was a bit of a learning curve.

I'm curious to know how Cranial Contamination developed into the beast of a band that it is, what are your main influences and also what bands have helped shape and define your sound over the years?
We both got into metal at a young age and started joining bands in school / college etc, I guess it was all metalcore stuff around that time, but when we started playing together we decided we wanted to play faster, more brutal music. I think there are too many bands and influences to mention really, if I was to say a few main ones it would probably boil down to the likes of Ingested, Disavowed, Pathology, Abominable Putridity & Disentomb. Those are the bands I think we've always wanted to sound like. We're not quite there yet...

Whilst we're currently still in the shit lockdown situation in the UK - can you tell us some of your favourite shows you've played over the years, including the best bands you've played shows with and also any favourite cities or venues to play?
I think some of our best shows have been in Europe, Deathfest and Slamming Brutality spring to mind where we played alongside some absolutely insane bands including the likes of Aborted, Decapitated & Guttural Secrete. We also did a couple of insane shows in Paris and Barcelona with our friends in Human Vivisection where the crowds went absolutely nuts which is always great! Back here in the UK, we always have a great time playing SouthWest Heavyfest which we've been fortunate enough to play a few times, and opening slam fest one year without a drummer yet still packing out the room is also one to mention. I think my favourite venue we've played was Rock'n'eat in Lyon, the whole place was just awesome. 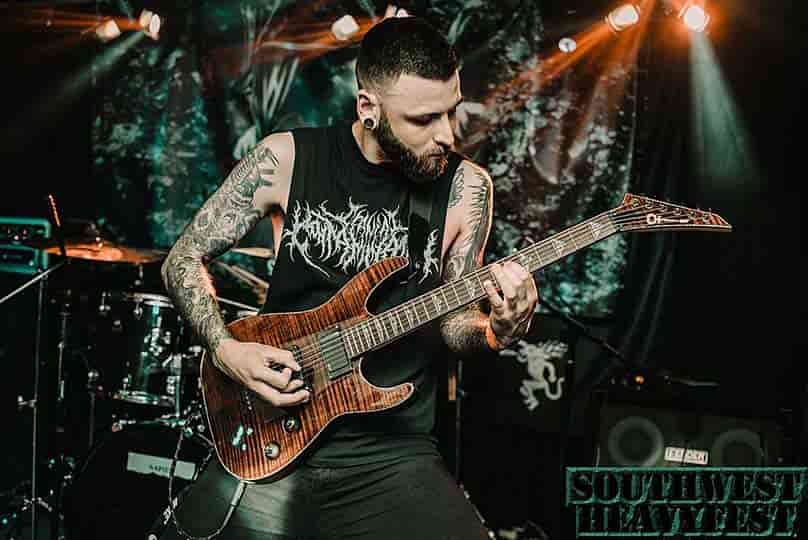 When you're not writing music or playing shows, what other hobbies or passions do you have in your spare time?
Does drinking count? I think we'd both say that was one... I (Will) enjoy hiking and getting outside, I've also tried to pick up DJ'ing during lockdown (definitely not a trve metalhead.. ) Ellwood's into cars so spends quite a bit of time going to meet ups ect, and also does airsoft at the weekend!

After the album is released (and hopefully we are back to normal with live music returning), what are the future plans for the band? Any tours or shows in the works you're able to reveal?
Currently the only show we have planned is this year's Southwest Heavyfest! We're looking into doing some tours next year though trying to limit the number of one off shows we do as we're now scattered all over the country so it makes travelling to gigs expensive and difficult. I'm sure there'll be a few we just can't say no to though..

Let's get creative! What would your perfect no-rules tour lineup be for Cranial Contamination?
So many bands to choose from! I'm gonna say Megadeth, Disentomb, Abominable Putridity and us.

Thank you so much for your time and answering our questions. As a big fan myself, I can't wait for the new album and look forward to hearing more from it! If you want to give any shout outs or mention anything else then please do so. Cheers!
Shout out to Ben Quinlivan, Andrew Bolton, John Hurst and Dimitri Sagaidak, without you guys this album wouldn't have been possible! And of course a massive thanks to anyone who buys / streams / downloads the album!