Heavy Metal Addicted is a band from Brazil and their debut full length "Criminal Ways" just released so time to ask Hëllish... Thë Killër some questions.

Hello friends of Heavy Metal Addicted and welcome to BRUTALISM.COM. In my opinion Heavy Metal Addicted play a straight and killer black/speed'n'roll. Do you agree with this definition for your music?
First of all thank you Manos for your questions and Twan for the space at BRUTALISM.COM and your support, it is a pleasure to us answer this killer interview, Hellyeah...
We make a dirty, criminal and outlaw sound with Speed Metal, Black Metal and others influences and genres, like Blues, Rock “n”Roll and for that reason we can say that we play an outlaw Black”n” Roll and this is only for outlaws bastards and be careful listening to “Criminal Ways” because it can destroy your life.

Motorhead and Venom seem to be on top of your favorites. Is that correct? Which other bands would make it on your top?
Yeah, this is correct, we grew up listening bands like Motorhead and Venom they are largely responsible for what we do, but we have others big influences from bands like Gehennah, GG Allin, Nifelheim, Bulldozer, Mercyful Fate, Judas Priest, Rose Tattoo, Inepsy, Baphomet’s Blood, Anti Cimex, Driller Killer and many others...

Brazil is a country with great tradition in extreme music. How do you see it, both past and present?
Here in Brazil we always had great bands, new and old, some bands like Sarcófago, Mystifier, Mutilator, the old and golden Sepultura, Arma, Primitive, Grave Desecrator, Hellishkiller, Alcoholocausto, Necrolust Alcoholic, Infested Blood, Evoked, Amazarak, Guerreiros Headbangers, Farscape, Diabolic Force, Evoked, Hellslaught, Profanatic Lust, Schizogoat, Hell Poison, Carrasco, The Black Spade, Thrashera,. Coffin Röt, Praga, Lápide, and there are thousands of bands that I could talk about it all day long...

What is your opinion on the norms society sets, on politics and religion? How do you express your social/political views in your lyrics?
We hate any form of oppression, we don't like authority, fuck the police and fuck the state. We hate all the corrupt politicians that plague Brazil and we hate any kind of religions. In our lyrics we talk about various political issues as in music “ NS Is Good, Only Under The Ground”, on this lyric we talk about all our hatred against the right-wing totalitarian regime, against nazism, racism, fascism, fuck to all this trashs ideologies. In the song “Fuck The Cop’s” we talk about the totalitarian regime that the police exercise over the population, we wanna breake the state and we fight against those pigs in uniform that do what they want, fuck off to this pieces of shit. In the general aspect of the topics such as legalization of drugs, violence, anti-government and state, anti-fascism, we keep standing in our criminal life and walking in the path of chaos and darkness...

What is the current situation like in Brazil? There were problems before for Nature and The Tribes of the Amazon with wildfires in 2019. Covid grewup in 2020-2021 to become a killing cloud over the country. And there are also many social/political problems.
We are fucked up in this country that is a fontain of social, political and religious problems, that alianate the population and keeping the people divided between right and left, everything is as the politicians like it and big businessmen want it, with the population divided and uninformed it is much easier to be controlled and manipulated...

About the deforestation of the Amazon and the fires around all the country, are more and more frequent and released by the president Bolsonaro and all his gang of corrupt genocidal ones, where profit is the only thing that a person like him aims at.
About the indigenous tribes in the Amazon and in several places in Brazil, because there are countless tribes, they are being massacred by miners and big businessmen with government support and this is unacceptable, it seems that Brazilians are turning a blind eye to everything that has been happening in our country.

And last but not least, the corona virus pandemic in Brazil is growing more and more and this is undeniable when you look at the numbers of infecteds and killed by this virus and by the poor public management of the president of the country, the big shit Bolsonaro...

Where did you record "Criminal Ways" and who produced it? Are you satisfied with the result? Would you change anything?
The Full-length “Criminal Ways” was recorded, mixed and masterized in the Darkside Studio and produced by our outlaw brother Diego DoUrden. We are totally satisfied with our first album and we wouldn’t change a thing, it sounds like it should sound.
A curiosity is that this album was recorded live and we only had 4 rehearsals before recording this marginal shit, another curiosity is that the drummer “DrügBëats” although had already knowlege and worked with percussion before, he never played in a real drums before the band start... 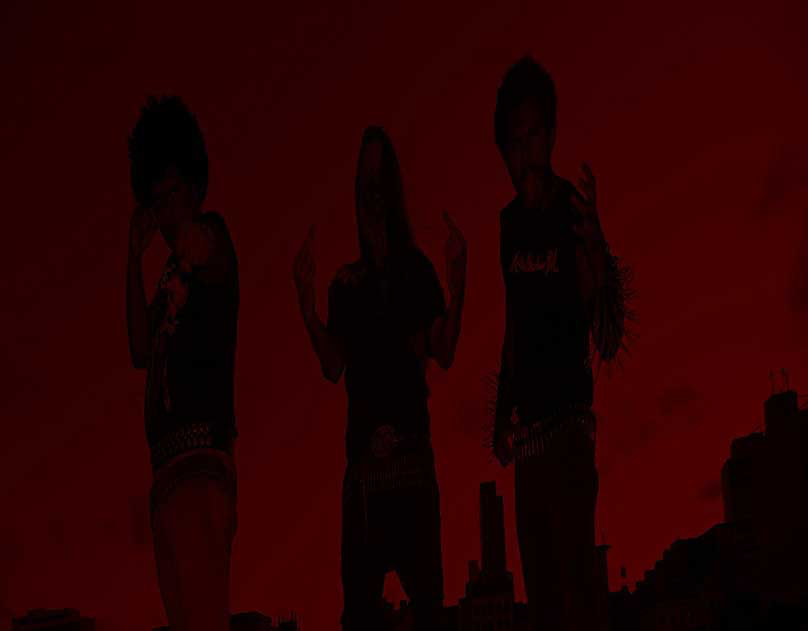 Have you received enough positive reviews so far for "Criminal Ways"? What is the best comment you got?
We are having a great feedback and reviews about our first album “Criminal Ways", that labels like Cianeto Discos from Brazil will release in 300 officials CD’s and Murder Records from Holland that released it at 30/06/2021 in a limited edition of 100 tape diehard hellpack, with poster A4 and one inlay with 4 pages A5 where you can find our lyrics and more info about our outlaw activities.

We appreciate a lot all the time and promotion tha sites like yours Brutalism.com, or the radios and webradios such as Programa Esgoto Bastardo, Programa Power Thrashing Death, Castle Blakk Radio, The Mighty Decibel, Metal Garage Magazine and many anothers great reports and reviews from our album are arriving from all over the world, thanks in advanve to all the bastards for all your outlaw support.

Will you support the album by doing some live shows? Have you ever played abroad?
We are emerging now with the band, when we were going to prepare to do live shows, the pandemic came and on this time we were just producing the album “Criminal Ways”.
We haven't played live yet, but we hope that when things return to normal, opportunities will arise to take our criminal rites to other countries and cultures.

How important is it for a band's members to be friends? Are you guys yourselves friends out of the band and how important is it for the band?
We believe that the band is a family, or better, saying is a marginal gang that lives nowhere and completly outlaw that make us more strong and united...
The real union on this outlaw brotherhood this is very important for the band.
In our case, besides being friends for a long time, more or less 15 years and DrügBëats and Hëllslaüght are real brothers, so I believe that this further strengthens our union against all these flawed morals and good maners inherited from religions, political and socials or other ailments that want to destroy our freedom of thought. FUCK THEM ALL...

Please let us know how we can order "Criminal Ways"? Thank you for the interview! The last words are yours! Keep up the good work and support the underground!
We thank you for support with the space to publish this great interview to help us talk and promote our first album “Criminal Ways”, that will also show a little of the reality we are facing in Brazil with this president and his ministers who only aim for profit and power, fuck these pigs of shits.

We also want to thank to the maniac Danihell Slaughter and Murder Fuckin’Records, Gil Dessoy and Cianeto Discos, Diego DoUrden and The Darkside Studio, Renato Costa and Garagem Tattoo and Alcides Burn and Burn Artwork.

We never forget all the outlaws bastards who support us and believe in our ideal, never let yourself be chained by this hypocritical and fascist society. Always fight for your ideals and never surrender.

You can buy our first album on cd or tape with
Murder Records (Holland) – 100 Tapes “DieHard” with poster A4, Inlay 4 pages A5 Links:
Cianeto discos (Brazil) – 300 officials CDs Links:
Or with the band in our Instagram / Facebook / E-mail
Band: https://www.facebook.com/pg/heavymetaladdicted666
Interviewer: Manos Michaelides
Jul 14, 2021
Next interview: The ideas of Animalesco, O Método