The one syllable word for Nihilo is... 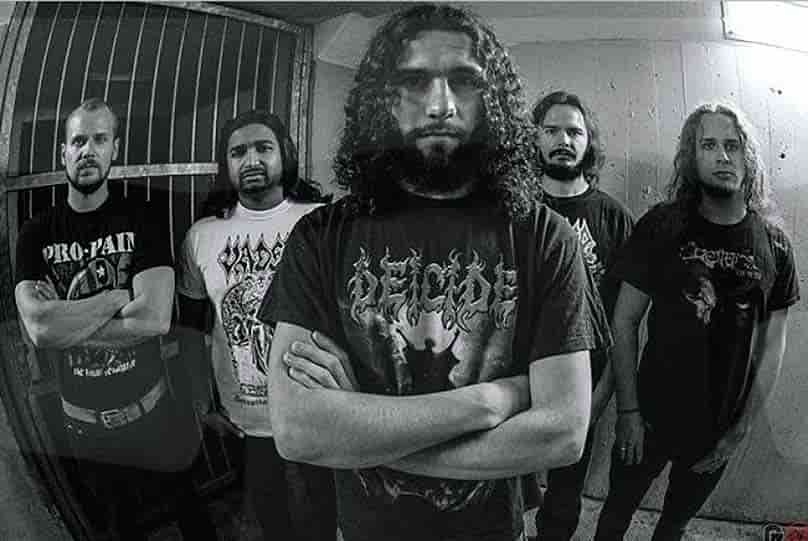 Swiss picturesque Emmental is not only host for cows and cheese, but also some first class METAL! Nihilo do their stint with the now available debut «Concordia Perpetua», featuring a set of first class death metal tunes. And recently they released the "Doom" album on Art Gates Records. Getting a score 4/5 it is time to have a talk with Damiano the drummer.

Hello guys and congratulations for your new release "Doom" which got a 4/5 from me on BRUTALISM.com. How do you think Nihilo evolved over the 4 years since your previous album "Dum Spiro Spero" and how were you led to materialize "Doom"?
We had a line up change in late 2015. Nicola (lead guitar) decided to leave the band. He was one of the founding members and a key member in terms of songwriting. With Marco Kessi we have found a good friend and excellent musician that gave some fresh ideas and energy into the band, which led to a more matured band in terms of skills and conviction. After rehearsing and playing shows we finally managed to focus fully on songwriting and took our time to write Doom.

Why did you choose the title "Doom" for the new album? Do you like doom metal or is it just a word implying "death" and "destruction"?
We all like doom metal quite well haha. But yeah, the word strongly stands for the decline of the human race. We are doomed. The times are fucked up right now. And "Doom" is a perfect one syllable word, which represents the current situation.

I have always believed there is something special in the Swiss water. So many great bands with personality have been born in Switzerland. Which are the reasons for this? And which Swiss bands (past and present) would you recommend?
Chocolate, cheese or maybe mountains? I don't know, we all have our ideas, our passion and love for music. So many to list, so many to listen. Hellhammer/Celtic Frost, Reactor, Sickening Gore, Messiah, Disparaged, Requiem, Samael, Triptykon, Cremation, Frostmoor, Vale Tudo, Palmer, E-L-R, Post Human Bigbang, Bölzer, Deathcult, Dakhma, Eggs of Gomorrh and plenty more. I also would like to mention the guys behind the C.H.A.O.S. circle (Deathcult, Antiversum and many more) and the H.U.C. (Helvetic Underground Committee)

Your vocalist Ragulan Vivekananthan comes from the exotic land of Sri Lanka! How did you guys met and decide to collaborate? Is there a metal scene in Sri Lanka? Any bands we should check out?
Since there are 20Mio people and metal is everywhere, there is a vital scene over there. Ragulan spent three weeks in January there. He met a few guys who are in the scene. We recommend Genocide Shrines, Serpent Athirst, Konflict, Arra.

I think Ragulan has a great vocal style that blends many different approaches of the extreme metal palette to an emphatic death metal resultant. Which are Ragulan's vocal influences?
Ragulan has three role models. Martin van Drunen (Asphyx), LG Petrov (Entombed) and Steve Diener (Palmer). They all inspired him to become the vocalist he is today. Both, in the studio and live on stage. 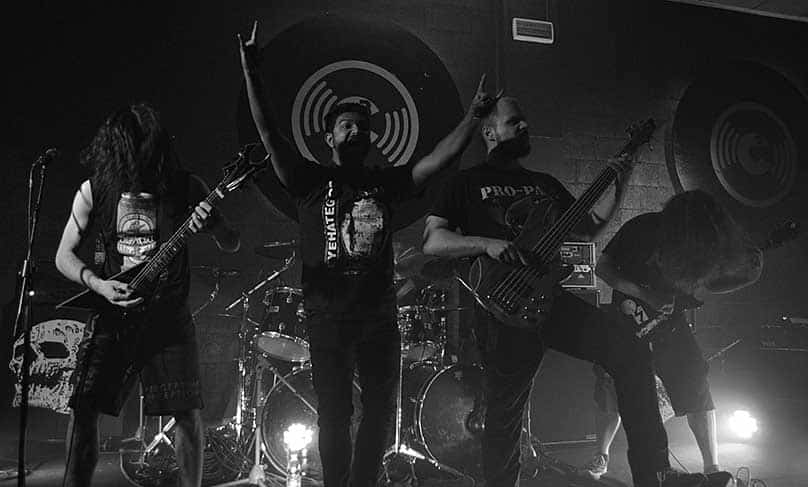 What are your tour plans at the moment? How can someone book Nihilo for a live show?
Nothing planned at the moment, but we're looking forward to play as often as possible. We are in discussion with several venues, bookers and other bands. We would love to come to Greece for example. This not a joke, we’re dead serious. Just contact us via band(at)nihilo.ch or via facebook.com/nihilometal.

Do you know anything about the Greek metal scene? Are you familiar with any Greek bands?
I am quite familiar with the Greek scene, old and newer stuff. I like classics from bands like Rotting Christ, Necromantia, Varathron and many others as well as newer bands like Inveracity, Dead Congregation, Embrace of Thorns, Acherontas, Devathorn and so on.

Which bands would you consider to be Nihilo's influences?
Always a tough question, because there are so many. Each of us has its own influences. Some that might please most of us are maybe bands like Cannibal Corpse, Behemoth, Morbid Angel, Suffocation, Sleep, Conan. Just to name a few.

You play old school death metal but you have many elements mixed in like black metal, doom metal, grindcore, hardcore punk and thrash metal. Is that a proof of Nihilo members different influences brought in? Which are these influences and how do you combine them musically?
Yes. It is a proof. Each of us brings in his ideas and got tons of influences themselves, which in the end form Nihilo. Sure, some key elements will always be there, but the sound will always evolve. We like diversity.

What was the role of the production in delivering a solid album like "Doom"? Who is responsible for that?
A natural, live sounding experience focused on atmosphere and aggression. I think we have found a good balance and put out our best work so far. We would like to thank Remo Häberli, who was behind the recording desk at Hidden Stash Tonstudio. Big props to him.

I would like you to list for us 5 classics that influenced you and 5 new albums that play a lot in your stereos these days.
Hard question but I will try. "Tomb Of The Mutilated"/"Bloodthirst" (Cannibal Corpse, yes I know those are two but I couldn't decide between those two, haha!), "Covenant"/"Gateways To Annihilation" (Morbid Angel, sorry same here man), "Reign In Blood" (Slayer), "King Of All Kings" (Hate Eternal, not as old, or maybe classic like the others but pretty important to me), "Vengeance War 'Till Death" (Bestial Warlust).  In terms of newer releases I am listening to a lot I would say "Promulgation Of The Fall" (Dead Congregation), "Omegalitheos" (Eskhaton), "Svn Eater" (Lvcifyre), "Ma-Ion" (Acherontas), "Hamkar Atonement" (Dakhma).

Do you believe that good music is still coming out? What is your opinion on people thinking that only the classics from the 80s or 90s worth attention?
Yes I do. That's their opinion. There are plenty of new bands which try to invent some new stuff und to combine different elements of metal or even combining different genres with metal. Zeal & Ardor is a perfect example for that. It doesn’t matter if you like the combination of Gospel and Metal. But their approach is different to the music. Something the world hasn’t seen before. Or just listen to the latest efforts from bands like Inferno, Eskhaton, Schammasch, Bölzer or the killer split release between Abigor/Nightbringer/Thy Darkened Shade/Mortuus. And more new bands like them will come. And that’s a good thing. 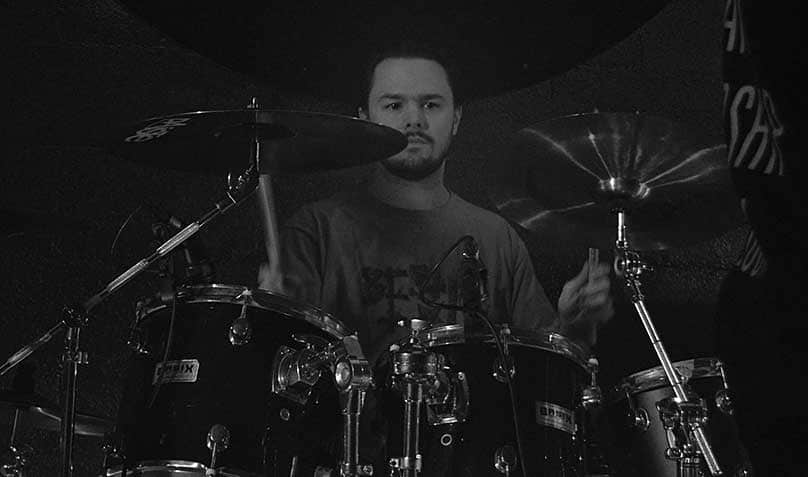 How do you structure a song? Who writes the songs and how?
Everyone in the band is involved during the songwriting process. That allows us to experiment with ideas and helps to form the structure that is necessary to make the song flow the way we want it.

Please let us know some details about your lyrics.
The content of the lyrics is diverse. But basically Ragulan tries to recite the world how he sees it. He writes them all by himself, but we all give him inputs. The sentences are written very open. Therefore, everyone adapt those words to its own life and situation. For example, the song "Antichrist" has not to be about the antichrist we know from Christianity. Everyone on earth has its own antichrist. Or is looked at as the antichrist.

Some people believe that the rising of the internet today has decreased record sales. Some also criticize the easy ways someone can listen to a new album today, claiming the "magic" of vinyl or demo tape hunting is over. What do you think?
The magic is still there to those who seek. It sure changed the landscape of music and probably will even more in the future. Old formats will still be there, but new ways will rise upon for sure.

What does someone have to do to get inspired to write a song?
Butt sex, haha! There is no blueprint for that. Therefore, it’s not easy to answer this question.

What plans do you have for the future of Nihilo?
Play as much as possible, write and release new material hopefully.

Thank you very much for this interview. I will say again I enjoyed very much "Doom" and I highly recommend all metal fans to listen the album and get to know Nihilo. Please let us know the ways to order "Doom". The last words are yours.
Thank you very much for the interview. Let's meet very soon at a show in Greece hopefully. Buy the record and other stuff through our bandcamp page, AGR or other distributors and stores.Support fukking underground, support death metal.
Band: https://www.facebook.com/nihilometal
Interviewer: Manos Michaelides
Mar 21, 2019
Next interview: The steel symbiosis of Nahum