The right choice of Obsecration 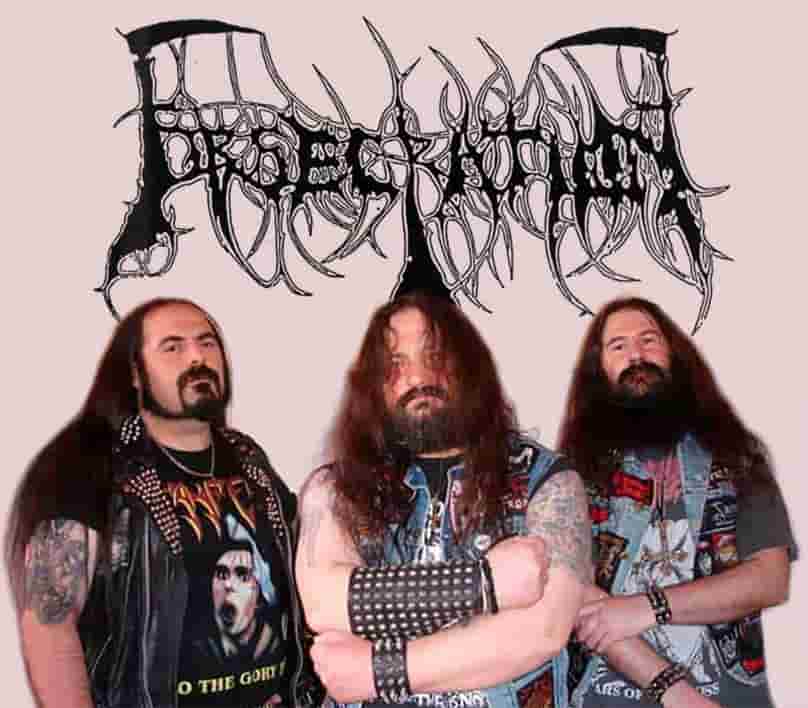 Greek death metal legends Obsecration released a new album in 2020 after 7 years. What they did in between and what about the line up and recording, you can read in the little chat with founding member Costas.

Hello Costas. First of all, congratulations on your new album. "Onwards The Mystic Paths Of The Dead" to me is a step above your previous one! What is the feedback so far?
Hi Chris!! Thnx a lot man. So glad you say that cos it is exactly what we wanted so it kind of justifies our effort! Feedback is really good so far both from our label and the fans!

Obsecration is a band active since 1991. Almost 30 years alive as a band and your 7th album sounds so fresh. Would you think that the new line up helped a lot to that?
Actually the new line up is not exactly NEW, as Drakhon is with us since 2006 and Ungod since 2015. It is just that Ungod started writing tracks in 2019 and gave us this freshness we needed.

You have been through many member changes. Despite that though, Obsecration have managed to maintain a character and a unique sound through the years. How have you managed to keep this unique music identity, having all those people come in and out of the band? Do you think that now Obsecration have a solid line up?
Yes we always suffered member changes and usually it was the composers. When there’s a steady base and everyone follows that lead adding of course his ideas here and there, everything works fine! Of course there were times when the new ideas dominated and this is where it all went bad! Well actually it wasn’t that bad, but it kind of took us of the track we wanted to follow! If the composer follows the track and stays committed everything is perfect! I think now we have a solid line up!

Ok back to the new album. "Onwards…" is a really fresh album but its production takes it back to the golden 90s. Tell me a little bit bout it. Where did it take place and how deliberate was this style of production?
Of course it was deliberate and we’re happy we achieved what we wanted. All recordings took place at Unholy studios except the leads that took place in Red 7 studio. Mix/master in Priest Diamonds studios. We had already tried the two tracks from the “Sign Of The Covenant Of Death” 4way split with Soulskinner, Abyssus and Malicious Silence and we were really happy with the outcome. Looks like our choice proved us right!

Do you personally follow the new age death metal sound? Clean production and triggers all around n stuff like that? I mean for Obsecration it is obvious you follow the 90s protocol. But when it comes to newer bands? Do you like the polished sound or are you stuck to the muddy but beloved old school?
Of course I love the good old school sound but I don’t have a problem in general listening to other stuff. I can listen to whatever and not only death metal. From Arcturus to Extreme Noise Terror, you name it! It is one thing what I like to listen to and another thing what I like to play with Obsecration.

Something I really like about you guys is that between each album you’ll definitely release several demos, EPs and split CDs. Truly underground vibe there. Especially between "Onwards" and "Into The Bloodemonium" there where 5 split CDs, 2 compilations and an EP if I am not mistaken. Are there any releases as such scheduled after "Onwards"?
Yes that’s right. As long as we can release split CDs or 7” EPs or anything other than a full length, we’ll do it. I hope we can release something like that until our next full. Not that it is a protocol or something. Our next release could as well be the next full length with nothing in between. Still… I’d prefer some sort of 7” or split CD haha

Ok let’s talk promotion. Now with this Covid situation, things for musicians are really tough. Gigs cancelled, releases delayed and a big mess with no end in general. Did you have any plans for promoting the new album that got interrupted by Covid19? Are there any plans for promotion under this current situation?
Unfortunately this is a big issue for the bands, especially when it comes to live gigs! It hasn’t affected us so much cos we haven’t had a live show since 2012. Promotion is good though! At least where there is a possibility of shipping! I hope there is no new lock down cos things will get way way worse! Hopefully things will get better and we get to have live shows again and whatever we had back in the days!

Ok Costas. That was it more or less. Thank you for your time. Last words are yours!
Thank you for your interest in us Chris! I hope the best for you! Lots of health and above all Stay Fucking Brutal!!!!
Band: https://www.facebook.com/obsecration
Interviewer: andychristos
May 18, 2021
Next interview: D.L.50 is NOT subscribed to any fashion