The secret of Haiduk

Haiduk is the death metal solo-project by guitarist Luka Milojica. Haiduk released a raw demo "Plagueswept", full-length debut "Spellbook". "Demonicon" was released in 2015. The latest album "Exomancer" was released in 2018 and it was time to ask Luka some questions.

Can you give us a short introduction of yourself?
Haiduk is a blackened death metal solo project.

What is your musical experience before starting with Haiduk? Played with other musicians?
I picked up a guitar and started writing right away. I realized music is a more powerful form of expression than something like visual art or literature. I’ve played with drummers and other guitarists but nothing serious.

In 2009 you finally recorded songs for "Plagueswept". Why took it so long to start recording?
The technology to record music became more accessible at the end of the decade. A friend of mine recorded a demo for his band, and I was seeing solo projects from Scandinavia showing it can be done. The metal scene was soft and pissing me off. Now I could finally do something about it!

Couple releases later, "Exomancer" is released, the next step forward. What did you do to make the progression in writing and recording?
There is more focus on atmosphere on ‘Exomancer’. Sections of two or more guitars simultaneously playing different melodies, with a sharper tone so both cut through. Like alchemy, the right combination creates an exponentially great effect.

I think the band name is taken from the 'bandits and brigands' during the Ottoman Empire. How did you came to these figures?
My background is from south east Europe and the name was fitting for a black metal solo project.

So your Haiduk persona goes into a more dark and black magic era. Why to this side and not keeping to the original?
Black magic is about serving yourself and conjuring darkness. I conjure darkness with music.

It feels like every album is a chapter of a story? First the spellbook then raising forces and now becoming a summoner. What will be next?
It’s a secret.

Ever thought of writing a novel or comic book based upon your character Haiduk?
Yes, but not based on Haiduk. It would be based on the world I created which was described on ‘Demonicon’.

Or what about a short movie? That would be great, visuals and the songs.
It would be wars and medieval battles. Hordes of demons and ogres, casters of black magic and necromancy, demigods and devils…

Why I mention the movie is, because an album is like a soundtrack. How do you start writing? Individual songs that can be shuffled or with a predefined order?
Individual songs. The tracklist is constantly changing and taking shape as more songs get written.

The vocals are sporadically. On purpose?
Yes. I wanted a lot of atmosphere on this album and music is better for that. 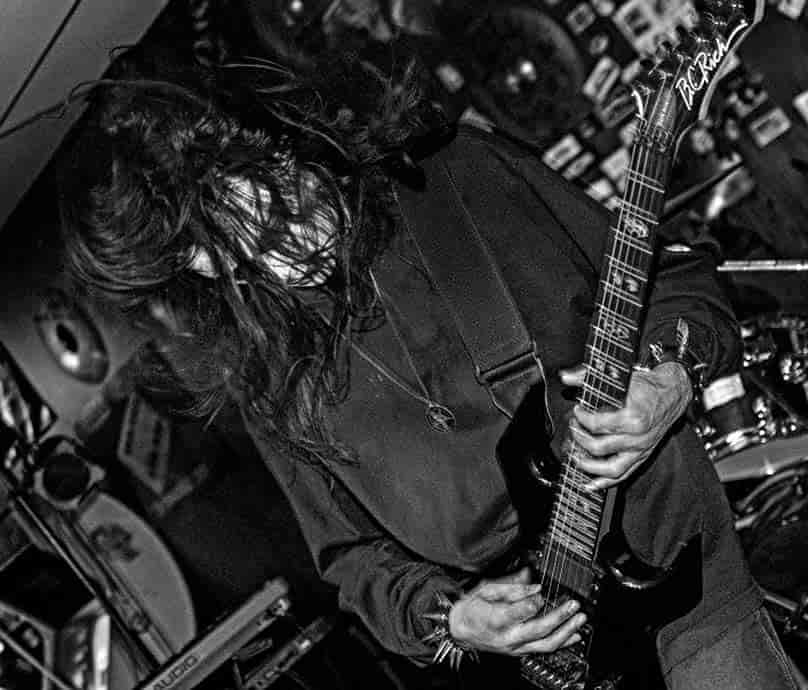 How is it to perform live? Exciting? Nervewrecking? And how people react on an one man band?
It’s a powerful feeling. Ripping up riffs with everything cranked loud, and the energy of the crowd elevates you. People’s first reaction is disbelief, then headbanging.

What were the most fun and best performances? Any nice stories about one of those?
I played a show in some 115 year old dilapidated barn with rotting floors and all the paint peeling off in there. Fire pits were burning outside and black metal emanating for miles in all directions.

And why are there no live videos on your YouTube channel?
There are live videos uploaded by other people.

As an one man band it gives full control on everything. Do you accept help from others? Is there something you really want others to do for you?
Creatively I seek no input from anyone. On the technical side, I’ve worked with studio engineers in the past to help with mixing and mastering. I try to do as much as possible myself in order to better project my own vision.

How do you have in mind for the future? What goals have to be achieved?
The goal is to reach more people. More metalheads, as well as people who aren’t into metal and convert them to Haiduk and death metal.

Coming to an end and most likely forgot some important question. So say what you wanna say or do some shameless self promotion.
The new album ‘Exomancer’ is available at Bandcamp.