The steel symbiosis of Nahum 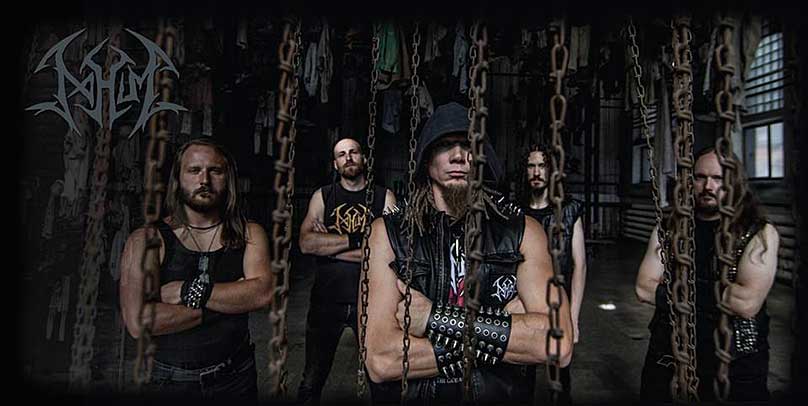 Nahum is a czech band and existing for more than 15 years. In 2018 they released their album "Within Destruction" which is a smasher of death/thrash metal. You can read the review here and after this album we had to talk to the band. So here you go, some questions and answered by Pavel.

Please give us a brief introduction of yourself and your bandmates?
Hi, I‘m Pavel Balcar, the vocalist from death-thrash metal band Nahum. The band is based in Czech Republic and it‘s quite typical – drums by Tom Brighter, bass by Jan Balcar, lead guitar by Michal Kapec and last but not least is the composer and the rhythm guitarist Tomash Nahum.

Can you give a short overview of the bands history? On facebook there is only czech written bio. And all facebook posts are in czech.
Well, we are working on our new website and facebook profile upgrade, so don‘t worry, it will be there soon! So, briefly about the band: It all started in 2004, so we‘ve been on the scene for 15 years, excluding one shorter break. Till 2015 we concentrated on metal scene in the Czech Republic, because it‘s important for us to have a strong fanclub base in our own country. And we were successful. After releasing our album "And The Chaos Has Begun" we started to focus on getting abroad. Currently, we continue in this trend with the new album "Within Destruction". It is easier when we are aware of many good fans in Czech and with the excellent new album. Today, we are sending albums to the whole world. During the years of playing we performed over 200 great gigs and huge open-airs (such as czech Masters of Rock open air, romanian Rockstadt Extreme Fest open air, slovak Gothoom festival open air, czech Rock Heart open air…). We are very active. Also, we cooperate with Vladimir ´Smerdulak´ Chebakov (he worked with Katalepsy, Sodom etc.) who did the artwork for the new album and merchandise. His great work can be seen in our last lyrics video.

How would you describe your style to a non metal interested person?
Massive forceful music with strong and dark motives. Excellent guitar solos, fierce dynamics with the great sound of hell. Simply – the metal massacre.

So why is the website still under construction? Shouldn't it be running with the new album?
The thing is, it‘s me who has to do most of the things, Nowadays, we are on the huge tour around Czech and Slovakia, so I’m doing the merchandising, interviews and basically all band management. On top of that, I have to go to work every day like anyone else. So, there isn‘t as much time as I need. The new band website is also my responsibility. I can assure you it‘s progressing and hopefully it‘s going to be ready soon.

How important is online promotion for the band? And is every members active on social media?
We know it‘s very important, so we do what we can, but only two of us are really active in social media space. The rest of the band despise the artificial virtual life. In general, we love to meet our friends and fans face to face and have a beer or a shot with them!

Hailing form the city of steel. You have to explain this...
It‘s very simple, we are from Ostrava, which is the third biggest city in our country, and it‘s history and also present is stuffed with heavy industry (coal, steel etc.). The life here was always hard and also the people here are quite distinctive. The factories produce steel and we produce heavy music, so it‘s symbiosis.

Can you share us the secret of your song writing? Where are idea taken from and what is the starting point for musical direction?
The first material was created by the whole band by jamming and playing in rehearsal room, but even in these days the most ideas came from guitarist Tomash. The second and the third albums were written almost entirely by him, apart from guitar solos. So this is a question for him. Anyway, I know he is a great fan of the true old school metal music such as Death, Pestilence, Slayer, Vader, Kreator. These are the sources of inspiration, however, during the years of playing he found his own style. Lyrics is inspired by the things we can see around us every day – the collapsing human society, the end of human race…

Nahum takes its time to record as the debut came out 8 years after starting. Another 3 years for the 2nd. What are the reasons?
When we started, it took some time before the found stable members, and we were also looking for our own style. But we had concerts from the very beginning. Also, we had a two-year break, because two bandmates were travelling. After they returned, the band became alive again, fresh and even stronger. We released our debut "The Gates Are Open", which is already sold-out. Since then, we have a new album every three years, which we consider as an ideal interval for us and ours fans. 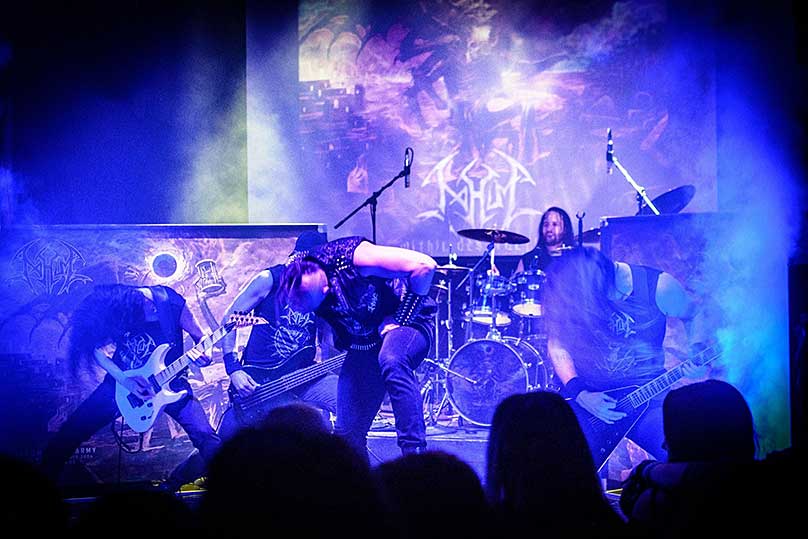 Does it also has to do something with the fact the new album is recorded in 3 different studios? What is the idea behind this way of working?
That is a different thing, even if we take maximum care of our every album. There were three studios because every member wanted to record in studio he knew well and they also needed to record in different times. So it was the question of convenience. Later, the material was produced by Polish studio Hertz, which gave to our album the excellent final sound.

Do you like recording in a studio? Or is it a necessary pain?
It‘s neither pain nor pleasure, it‘s just a part of band‘s life. We always can‘t wait to hear the sound of our songs after the final production!

Musically Nahum plays rather straight forward death/thrash. No need for experimental steps in style or other instruments?
We try to make good and well-composed music in the first place, we think that a good riffs and a good motives are the most important things. We don‘t avoid any experiments or influence, but till now we haven‘t felt any need for them. The mood of our songs is vital, and we can achieve the right feeling with the instruments we play. The other reason is that we want to be able to play our music live as you hear it on our record.

Shows for 2019 are mainly in eastern Europe. Difficult to go to other countries?
I would correct you there, we are doing huge tour in central Europe (smile). It‘s not that difficult to play anywhere, but it depends on conditions. If the organizer pays for the travel expenses and accommodation, we are ready to play even in hell. However, we are open to any offer so go ahead!

Are there places you would like to play? Maybe some festivals you want to play?
There are many places like that! Netherlands Deathfest maybe (smile)? Yeah, it would be great to play on festivals such as Hellfest, Summer Breeze, Bloodstock, Party San, Wacken, Metaldays, Graspop, Obscene Extreme… there are plenty of wonderful festivals. However, we‘ll definitely be glad to return to Rockstadt Extreme festival, or Gothoom open air.

Who is doing the bookings? Everyone in the band trying to get a show?
Well, booking is my job, with the occasional help of Tomash. We have no management or company for this.

How do you travel to the venues? Own car? Rental mini van? What equipment do you bring along yourself to the shows?
When our van‘s working, we use it, but when is not, we have to rent one. And what about equipment? It depends on the situation, we are able to take everything, but usually we take amplifiers, instruments and drums, as any other band.

And what will a deaf person experience when seeing Nahum on stage? Will he/she get free entrance?
Deaf or blind, we hope everyone will enjoy our gig! It is because our show is not only full of fierce music but also a freak show full of energy and „destruction“. Free entrance is a question for organizers (smile), but we‘ll definitely have a drink with him/her!

You already done shows in the past. Any favourite and why was it?
As I mentioned, we played on many open-airs, but some places stay in our memories – like good quality festival Metalgate Czech Death fest open air, where we are going to play this year again. The festival has a great family atmosphere. We also enjoyed a great gig on Masters Of Rock open air in Vizovice. We had many gigs but we love every single concert as long as the fans are crazy and enjoying our set with us!

And of course there must be some nasty or funny backstage stories to share. So go ahead...
Not really… there‘s nothing to share, it‘s just rock´n´roll, you know what I mean…

Obvious you like metal yourself. Can you remember how you became a metalhead? Your first bought album? Your first concert?
My first album was Iron Maiden "The Seventh Son Of A Seventh Son", and Helloween "Walls Of Jericho" which I got from my cousin on a tape. It was the love on first hearing. I started to listen to metal when I was 10, and of course my first gig was Iron Maiden. Since then I listen to all metal genres from heavy metal to black metal. I make no difference, but the music has to be good. 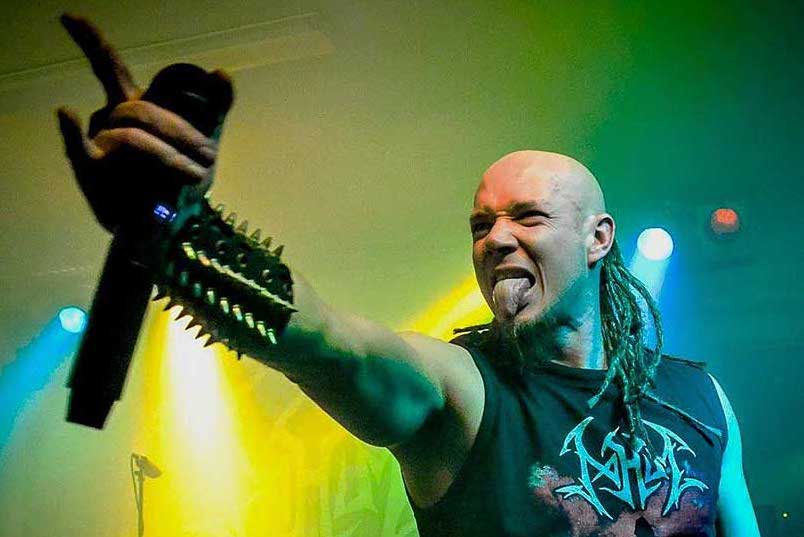 Are you a music collector or a Spotify user?
I collect. I like proper real products and I have what I really like. I‘m not just a fucking consumer.

What other things do you in daily life? Work? Study? And what are your hobbies to spend free time? What will we drink when meeting in a pub?
Well, as I mentioned, I have a fulltime job, and all other members too - apart from guitarist Michal, who studies art (painting). Our life is really busy, so we don‘t have much free time. However, I love my family, mountain hiking, books, good films, sports, so when I have chance, I try to catch up with these. I can say it is similar for the band mates. Jan bassist also has another love – his motorbike.
Speaking about my favourite drink, it‘s definitely a good beer (that‘s why we made our special beer called Nahum Within Destruction 15 % for our fans), but I would also enjoy Slivovice (czech 55% spirit) and Jack Daniel’s whiskey.

Most likely I forgot to ask an important question so do any self promotion to close this little interview.
We are Nahum and we play raw metal music without compromise! We did a great album, "Within Destruction", so we hope you‘ll enjoy it! If you want to see us on the stage, contact us, we are booking for the year 2020!

Last rites to the readers?
Stay metal and be yourself. Cheers everyone!
Band: https://www.facebook.com/nahummetal
Interviewer: twansibon
Mar 18, 2019
Next interview: Mass Infection want to thank you!