The stinking vaginas and bleeding assholes in Lividity 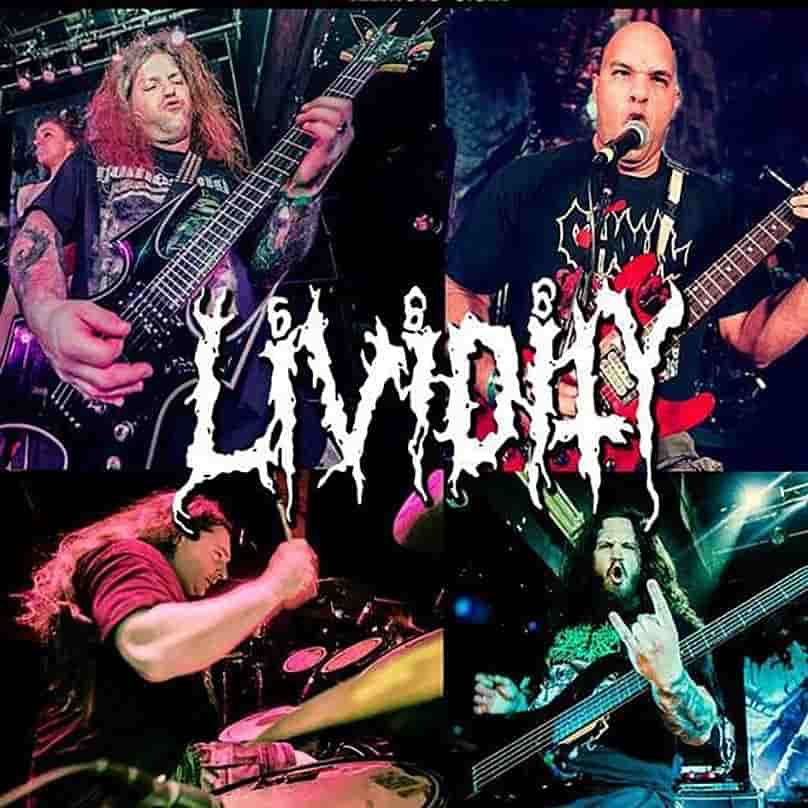 Founded by Dave Kibler originally as a one-man project in 1993. After two years he invited other musicians into the project thus shifting Lividity. With "Perverseverance" they released their 5th full length (not counting the numerous splits, compilations and live albums) and Andy Christos has a little chat with him.

Hello Dave. Hope everything's well. Congratulations on your new full length man. "Perverseverance" literally blew my brains out!!! How do you feel and what's the feedback so far?
Holy shit man, we are having a blast right now with this album and thanx for the killer words and support! The feedback has been phenominal and we are gearing up to promote this release hard and heavy with our great friends at Metal Age Productions from Slovakia! We feel there is something very special about this release, we don't know the full impact of it yet as it's only been out for a month, but some really cool shows and tours coming up in 2019 and will have them all posted when finalized. We cannot complain, only thank everyone for sticking with us all these years and say welcome to the new fans.

If I should spot a big difference between this new one and the previous Lividity albums, It definitely should be the production. A perfect balance of clarity between the instruments and the appropriate roughness a death metal production should have. Tell us a bit bout the recording, mixing-mastering process.
Dan Klein of Iron Hand Audio outta Chicago hooked it all up. A friend of our drummer, Garrett, as he has done work with Garrett's other bands as well, so we knew we were getting the right man for the job. Dan went above and beyond with the way he made our album sizzle. We pre productioned for the tones and once we got locked into what we liked everything fell right into place. This album has more life (or death) than any release to this point in 25 years of existence, a real organic and raw attitude, yet tight and well produced. Clarity and more mature. The album I personally have been waiting to be a part of and help create for a long time. Mixing and mastering proofs for a couple weeks, file sharing and listening to it on everything from car, boom box, stereo, headphones, etc... I feel like we nailed it with the help of Dan, as we aren't very savvy with paramaters of frequencies and sound sculpting. That's where we rely on our sound engineer. As long as Dan has his studio, that is where we will go every time.

The brutality of the songs and the layout of course is followed by the lyrics themselves. I mean...Ok its Lividity, I did not expect songs about Jesus and Santa Claus. It definitely should be about horse threesomes and penguin foursomes, Perversion in any way possible. Ever encountered problems concerning your lyrics or your artwork?
First off, as fucked up or heinous the lyrics may be, the stories are top notch. Carving their way through the album. A lot of hate in this one. After 9 years between releases, we were pent up and outta control with our thoughts. It all came spewing out. We have encountered a couple different protest rallies against us while touring. Innsbruck, Austria on our 2007 Europe tour had problems with Lividity hitting their town (for our 2nd time there). I received a phone call from organizer to make a statement for the press. That organization protesting went to the newspaper, radio and TV about this. Broke the windows out of the club we were playing. Needless to say, it was probably the best promotion we ever got as that club was packed when we arrived. The other time was in Quebec City, Canada on tour in 2009. The club was ran by some ladies. They still booked us, we still played our set, everyone was having a blast until those chics turned off all the power while we were still playing and conducted an anti-women hating segment of their own on the stage as we were standing there. Really weird situation. Still don't understand it 10 years later haha. As far as our covers... They have always been under scrutiny with the public, even metal heads themselves who used to tell me this wouldn't last long, that it isn't death metal issues bla, bla, bla. Well, ain't nothing changed and we are still rolling at full steam! A lot of times the labels or magazines will have to use slip sleeve censorship over the art, but we have never changed the art to fit anybodies specifications.

Since 1995 if I am not mistaken, the trip contains four more full length albums and numerous split cds, compilations, live albums etc. How do you see things now after all those years in action? Is your vision with Lividity the same as it was back in the day?
The vision is the same. To inflict pain and shock whoever we can. To me that's death metal. The shock... That's what made Cannibal Corpse, Autopsy, Impetigo, and Exhumed so lethal in the sicker side of death metal. It became gore metal. Today we are older and wiser, taking Lividity to another level of sickness. We are still driven.

You've played almost in every corner of the world. Is there any band you haven't shared the stage yet with, or even any crazy tour you'd like to be part of and haven't?
I would really like to tour with Aborted, Misery Index, Profanation (Ger) Waco Jesus, Gorgasm, Putrid Pile. Any combination of these bands would be sick! The perfect tour. We haven't played anywhere in Asia yet or Australia and those are 2 areas we are trying to get to. I would like to see more of South America as well. We have been to Bogota, Colombia 2 times for Bogota Death Grind Fest. However we did just get a very cool offer to do 4 shows in Brazil end of 2019. Hope that falls into place.

How do you see the death metal scene after all those years? Apparently the genre is not just death metal now. There's brutal death, old school death, slam and some other core-ish stuff I do not dare mention. Where does this evolution find you?
I really don't look at music as a genre, more for the music. If it's heavy, it's heavy... If it's lame, it's lame... My inspiration (as an old fuck) dates back to the early '70's music like Alice Cooper, Black Sabbath, Uriah Heep, Rush, AC/DC... even earlier than that with Cream or Jimi Hendrix. That's when I was getting acquainted with sound and structure... The perverse hateful lyrics come from a lot of porn watching mixed with the bad relationships we have had but couldn't do anything about it without going to jail. So it's our release. That's why no matter what anyone says about our lyrics... It won't change a thing because it's our fantasies. We aren't going to lay down because someone says "Boo-Hoo".

Lividity has been through many member changes. You are the only member there from day one so I take it that you are the main perv behind that concept. My question is: Are all the other members of Lividity sharing the same passion for perversion as you do? Are their views on stinking vaginas, bleeding asholes and big boobs the same as yours?
Hahaha yeah man, they all pitch in on the bitch slapping. We write and then we laugh, then we write some more. Everyone is on the same page with everything. There's no conflict or grievance over any of it. I am the original freak of the band. The ideas started flowing in my veins Summer of 1993. Many of your readers were probably still sucking on mama's tit. The turnover of members didn't tarnish the Lividity brand, it kept each album fresh and with new ideas from newer members. We never jammed with anyone outside the bands circle of friends. Always an easy transition when you jam with friends. Never a stranger walked in to try out... More like "Hey Mike, Aaron just quit, you wanna come jam?" that simple. I think I might have to form a song title around "Stinking Vaginas, Bleeding Assholes And Big Boobs"!! hahaha, that's killer!!

Hahahahaha...Yeah you do that as long as I take my credit.. Haha... So,what is your life besides Lividity? Does the band make it to pay some bills or do you have to work day job to come by?
We all have jobs. Band doesn't pay the bills. We don't have the wants to go out on the road 8 months out of a year. So we attack what we can and and it's a good release from every day life. We are in a good spot. When we do play shows or tour and the fans finally get to see us Live it's a treat since we aren't hitting their city 4 times a year. We all have families that are real supportive for the band activities... We are having a blast right now!! 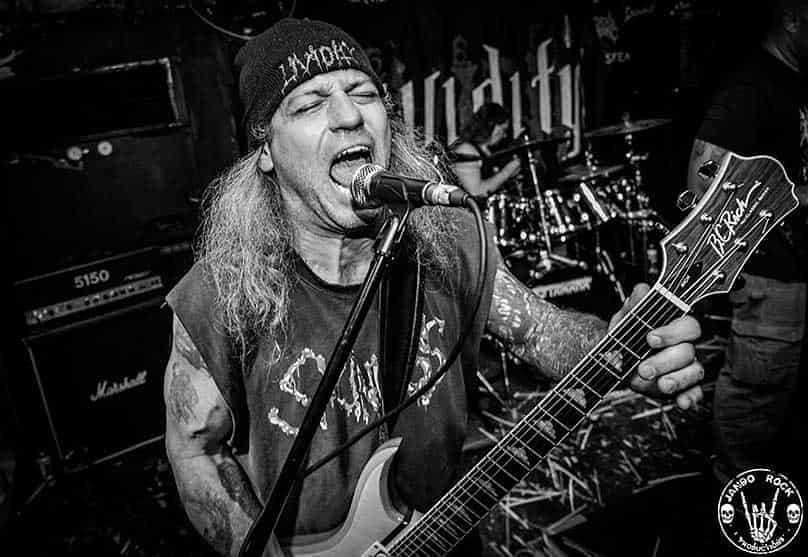 "Perverseverance" is definitely haunting my stereo for good as it is definitely in my top 10 for 2018. What is your promotional plan? Tour dates, festivals etc. any European dates?
Thanx bro, we appreciate that! We ended 2018 with a couple great fests (Full Terror Assault-IL. & Ontario Death Fest-Toronto, Can.)... as for 2019 we have some very special plans in shows!! They are...
Mar. 1 Chicago, IL. with Nocturnus AD (FL)
May 10-26 Europe Tour with Sacrificial Slaughter (CA), Devine Defilement (Iceland) and Bastard Asylum (WI), this includes 2 fests (Cz & Swiss)
July 19-20 Monterrey Death Fest (Mexico)
Aug. 8-10 Chicago Domination Fest
Sept.- Fest in Los Angeles in the works
Dec.- Four shows in Brazil in the works
That will pretty much cover 2019 of what we will be doing.

Ok...Let's put you in a dilemma here. You have a guy that downloads all your albums and finds your music awesome and another one that buys everything and finds them worse than his own shit. Both of them come at you and tell you their story. Who get's a punch in the face? The buyer that thinks your music sucks or the downloader that worships every riff?
Obviously the buyer being a sucker for buying them... haha not only one release but multiple releases. He's the dumb ass and needs to be punched. Not that he hates it, just for wasting my time... haha

Let me take you some good 16-17 years back and your first interview for BRUTALISM zine (2002) with Twan. A really weird interview full on spicy details of hairy scrotums and orgasms and sperm showers and yada yada. So nasty that if someone that has no business with death metal read it, he'd definitely think that you're some kind of weird porn star like Ron Jeremy or something... Do you remember any of it?
Yeah I remember doing the interview for your zine. But, done many interviews and Q & A's are fuzzy! But yes, I am positive the interview was pretty fucked up haha, I have no shame in what I say or do. Still to this day, I am sure there were questions that fired me up.. Story telling, boozin', hands on a pair of tits, lack of sleep, blue balls, hungry, chemical imbalance, fiesty... any or all of these symptoms were probably in effect.

Thank you for your time Dave. That's all from me. Final words are yours
Fuck yeah man, thanx for the never ending support all these years!! The pussy lovers of the underground are back with a vengeance and hope to cross your paths along the way in 2019!! Keep it fucking sick!!!
Band: https://www.facebook.com/lividityofficial
Interviewer: andychristos
Jan 8, 2019
Next interview: The four hundred riffs of Bludgeon