The trance trip of Pressor

Originally from Kostroma, Russia, this stoned sludge doom band is now hailing from Saint Petersburg. Pressor is active since 2008 but started under the monicker Leaden Sky. After several changes in the line up, the name was changed in 2010 to Pressor and start releasing material. Their latest effort is the EP "Weird Things". The review of this EP can be read here and we also had a conversation with Stas.

Please give us a brief introduction of yourself and your bandmates?
Hi there. It's Stas. There are two permanent members in Pressor: me and second guitar player Anton. We are from small town in the middle of Russia but we have been living in Saint Petersburg for last four years.
I'm working with songs and arts and Anton schedules our gigs and tours. The other guys were changing from time to time, but now, I think, we have most powerful combo. It's Daniil on drums and Denis on bass.

History of the band goes back to 2008 and earlier. What was the reason to start an own band? Fame? Money?
Fame and money, yeah, if you wanna it all you have to make a sludge metal band, as usually. Apart from that there was something inside us, that told "the only way to enjoy the music much better than listening it, its playing it".

Pre Pressor played funeral doom/death in the beginning, why did you switched to sludge?
I have been listening to doom/death music for few years before I started playing the guitar. Next few years I was playing sad and gloom metal music only. At the time, when we had first stable group version, I had enough of that doom/death gloominess and sadness. Then I just heard about blues scale, and when I applied it to my metal-guitar-player skills I thought "Oh shi, sounds like Sludge-metal!"
Just for lols, at the same evening I wrote a bunch of riffs in this way, composed it to a simple track and showed to the guys, and they liked it. Fat and grooviness, without sad and gloominess. We continued playing both kinds of stuff for a while, but our drummer had bad fast-kicking skill, so we excluded doom/death tracks :D
We played our first gig at nearby village, at the country club. Video from this show was viewed by one guy, from Moscow sludge scene. It is worth mentioning the sludge scene in Moscow (and Russia at all) was at an early stage and very friendly to new bands as opposed to metal scene, which was overdosed. That guy posted our video on a local music forum, and then we got invitation to gig in Moscow. And it started to roll on.

Obviously with the style change the moniker changed too. Is there a meaning why you choose Pressor? And what does it represent?
It's something about I actually had realized what kind of heaviness attract me. Low, slow and with regular sound pressing. That way I got band name.

Being from Russia, do you feel restrictions in what you play and lyrical content? In other words freedom of speech?
Usually to get the attention of the authorities you need to be pretty successful musicians, and take from 1000 person hall events, especially when you have russian lyrics. We feel sorry to our more popular colleagues, when they get raided by government, but we have more underground scene, where you feel free in what you want to say to your audience.

Topics about weed, is this you use because it is part of the sludge/stoner scene? And is it easy to obtain in Russia?
It's started because of being part of this scene. When I got first Pressor track, I even didn't smoke a weed. Here is answer to second question. In province you have to go hard to get some stuff.
But it changes, when you are in big city. Regular shows in SPb and Moscow loaded us completely to this topic. And when we moved to Saint Petersburg this thing became significant part of our life.

Released an EP, split, a single and in 2018 another EP. Wasn't it time to record a full length? Or is there a reason why an EP?
Yeah, there was a reason. Actually freshest song on “Weird Things” was dating back to 2015 year. Some track was written in 2012! I mean all of them are pretty old stuff. Our last years in hometown weren’t very productive for new material. This was the main reason why I and Anton decided to change location.
When we moved, we got new drummer (on second day being in SPb, haha) and after a few months we made decision to record unreleased material and we did the biggest part of it in the summer 2016 Around the same time I drastically changed my mind about what I want to do. Sludge and stoner music as it is became less exciting for me and I was getting more and more attracted to different pro-electronic music. It took me one year to understand what I can do to make our music interesting, for myself firstly. And we later got stuck at the mixing stage.
But as they say, every cloud has a silver lining… All of this awful delays with release gave us time to make a lot of new stuff. And now, 1 year after release of Weird Things we have prepared material to record our first full length. The tracks are done, studio dates are scheduled for this week. And only now, I think, we are really prepared to rock for all knobs to the right. There are 5 epic pieces and some little nice additions. 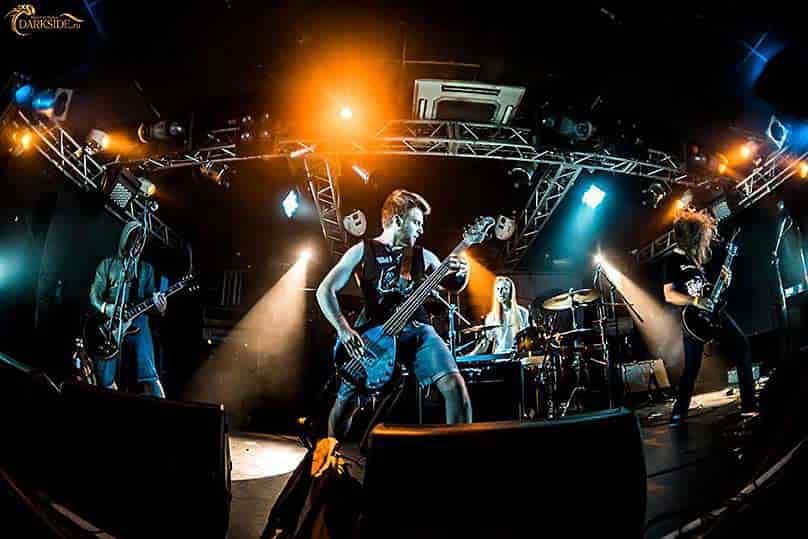 How did recording go? Home studio? Were the songs already formed or rewriting during recording?
For the Weird Things we used friendly DIY studio near our rehearsal room and recorded tracks composed a long time ago. For our forthcoming LP we already have recorded 1 track and we did it in one of the best studio in SPb with experienced sound engineer. Track was fresh out of the oven and some riffs were fixed at 15 min before recording have been made.

Where did you get inspiration from for the songs? And don't tell me it is weed...
Of Course not. Give us some credit! It's acid at all!
And seriously, it's different dark, weird and trippy stuff. Saint Petersburg has a lot of inspiring things: from majestic city scapes to modern art events and local underground electronic scene. Since we move I haven't felt any lack of ideas.

Now the EP is released it comes to promotion. Do you leave promotion to the label or pushing it yourself?
The most part of promotion we did by ourselves. It means we were touring in Russia a lot and a few times to Europe. Anton has his own distro now and used to have a small booking agency. And our label also helps us. They released our split and EP's physically and took them to online stores. Also they involved VJ artist NOA and she made visual video for the whole EP.

What is your favourite way to promote the EP? Reviews? Interviews? Meet & Greet?
Our label sent our music to some webzines. Some of them took an interview. But it's all. Looks like total deep underground :D I think the real promo company will be developed for forthcoming album, but I have no idea what we are gonna do, yet.

What about upcoming live shows? Getting some festivals throughout Europe? Is there a place you would really like to perform? And what can people expect from a show?
We are scheduling our small European tour for this spring. We gonna start on 19 april from Riga and then we will play in Warsaw, Prague, Wien, Budapest and many more. Actually our autumn LP supporting tour is already in progress too.
As to places we would like to perform? Of course we'd like to play at big themed festival, like Roadburn or Desertfest. But I really hope we will play at Burning Man sometime, haha.
As to our show. We already have a fascinating background videos, lights and smoke machine. Classy and still working well. People after our last shows usually said "wow, It was like in a trance, or trip!"

And what about hobbies? How to spend free time? Do you have a bucket list and what is the top 3?
Yeah, the part of our life besides music is actually our hobbies. All of us have regular work, to make a living but mainly we are all involved into different underground music movements. Like Ohm Collective, for example. Anton with guys are making events. Another guys are shooting the videos. Being a graphic designer I help them with design. So this is it, all of our free time we try to spend for music anyway.

Last rites to the readers?
Be rave and go further!