What is the message of Zora?

Zora is a brutal death metal band screaming its extreme hate from Southern Italy since 2003 and in 2021 they released their 3rd full length “Soul Raptor”. Time to check them out and see what Tat0 and Gianluca have to tell.

Hello guys and congratulations for the release of your 3rd full length “Soul Raptor”. What’s the band’s history so far? In which other bands/projects do you play and what does Zora mean for you?
Tat0: Thank you so much for the space you offer us on BRUTALISM.com! Zora was born in 2003, in Calabria - Italy, "Soul Raptor" is our third full length and eighth studio work, and today in the band it’s me (Tat0) on vocals and bass, Glk Molè on guitar and Giampiero Serra on drum. Each of us is also part of other projects, always extreme metal; I also play with Antipathic - Glacial Fear - Defechate - Throne Of flesh and Unscriptural, Glk is also part of Glacial Fear - Lupercalia and Bastardi, and Giampiero is part of Deathcrush and Infernal Goat. None of these projects is more important to us than another, each has its own particularity and meaning

When and how was “Soul Raptor” written? Do you usually jam over a riff to create a Zora song or you come to the rehearsal room with the full idea of the song and just learn it and practice it? What works best for Zora?
Tat0: Each Zora’s song is a team work, unfortunately we live far away from each other, so we have to work remotely. All songs born from an idea or a riff, when the skeleton of the song is ready it is presented to the other guys and everyone puts their own. This riff are born by themselves and by chance, from a riff that is placed in the head or from a thought that turns into a melody, then everything takes shape in a natural way and without too many forcings or stylistic research linked to duration or genre, instinctivity is the only dragging component

Please let us know the details of recording, mixing and mastering “Soul Raptor”. Did you achieve the result you had in mind? How do you see your progress from album to album?
Gianluca: the record was conceived between Calabria where Tato and I live and Sardinia where Giampiero lives the whole process took place with a continuous exchange, we sent the basic ideas and Giampiero gave us the finished track, slowly for a year track after track we came up with an album to be proud of. With the tracks completed and edited I started mixing them in my studio keeping in mind to have a modern yet human sound probably one of the best (with "Gore" album) of band's history

I understand that your lyrics are a significant part for the band. Who writes them? What do you want to express and which ways do you use to achieve it?
Tat0: I write the lyrics, and they’re as important as the music, because the message of the music of Zora is a social criticism, vent and total repulsion for all those attitudes and for all those people who day after day bastardizes every sphere and aspect of the human world. It is in this perspective that Zora focuses his message in the slogan "Scream Your Hate" and that's exactly what our music and our message are about, it be must say everything we think, and strongly, ever !

Given the previous question, is “Soul Raptor” a concept album? Do all songs unite somewhere in the end?
Tat0: rather than being a concept or a story I would say that it has a common thread of which all the traces speak, that is, the complete subjection to which we are subjected to social media networks and information in general. By now we are unable to think with our heads, unable to develop a critical and objective judgment, and completely drunk with fake news and false idols.

You are based in southern Italy. What is the metal scene at the moment a) in your area and b) in Italy in general like?
Gianluca: apart from the obvious difficulties due to the pandemic that have obviously mowed down any possibility of being able to do a live, in recent years there are fewer bands but the level that is coming out is definitely good, I have recently seen excellent works in the doom death field coming out in my region, bands like Gargoyle, CLI, Bretus, Carcano, Metal Detektor, Shadow Of Soul, Memories Of A Lost Soul, something small is moving, we need to unite as soon as possible these forces for some extreme night, I try !crest of Italy it's fully growing of talented bands, this is not a news, we ever had a strong underground movement and nowadays I see some new professional labels coming up and is good!!! 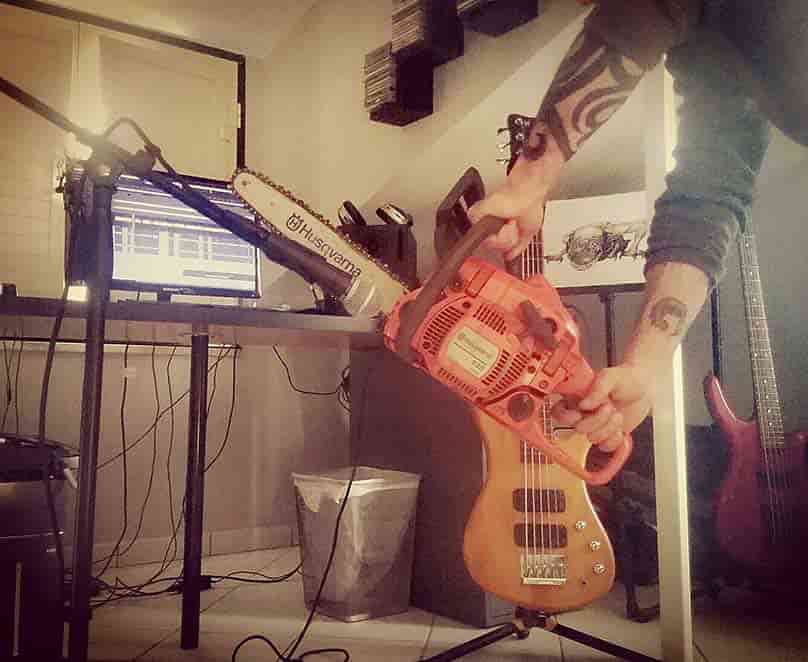 What is the meaning of the band’s name “Zora” and who created your logo?
Tat0: Our name does not come from the comic, it is not the vampire ahahha, I anticipate it because it is a question that is often asked of course, and it is always nice to tell what it actually comes from. Zora was the pitbull of our first graphic designer Fabio Bagalà, the one who also designed the logo, a ferocious dog, but at the same time very docile and grateful towards Fabio, and this is because he was a veteran of clandestine fights that had wounded him in the body and especially in the soul, making him distrustful and with the whole world, except precisely with Fabio, the one who found him on the street drawing him to safety. Given its history, and the reason for its anger, it immediately seemed like the perfect name for the band.

Were Zora a power trio in all incarnations of your line-up? What are the pros and cons of being a power trio?
Tat0: yes, except for a very short interval, we were always three; it is not a drastic choice dictated by something in particular, we started like this and we never felt the need to expand the training, basically we make a death metal with a lot of groove, we do not need so many elements to have fun as we already do.

Are live shows significant for you and what are your plans in this sector?
We have done several live shows in the past, even outside Italy, and it has always been a great party, we love this aspect a lot, it is thanks to the live shows that you get in close contact with people, you know new bands and lots of interesting people. We hope to be able to do it in the future, even if the distance that separates each of us ( we do not live in the same cities) makes it very difficult

Which bands have been the biggest influences for Zora, and which artists have influenced each of you individually on your instrument?
We all naturally come from a background death thrash and black metal, and each of us also has other projects that always relate to extreme metal; it can be mention bands like Cannibal Corpse, Bolt Thrower, Obituary, Deicide, Suffocation, Deeds Of flesh, Dying Fetus ... but also Throwdown, Voivod, Downset, Suicidal Tendencies, Slayer ... in short, bands that we have always listened and that have conditioned us giving us an imprintig

Thank you for the interview, guys! Good luck with “Soul Raptor”! I am sure you will have it! My opinion is already stated on my review. Let’s close the interview with your contacts and any additional or last minute info you want to share with our readers.
Thanks again to you for the nice and challenging questions and for the space you offered us, and thanks also for your beautiful words and your best wishes, we really appreciate that you enjoyed Soul Raptor! We keep in touch, if someone wants to listen to something our own can do it at our Bandcamp channel. ALWAYS EXTREME AND SCREAM YOUR HATE m/!
Band: https://www.facebook.com/zoraband
Interviewer: Manos Michaelides
Sep 8, 2021
Next interview: Three times right for Irredemption