Pronounced as Zero Exist this Finnish outfit brings us a second full length of despondently doomy metal that in their own words has a dark metal flavour built into the song writing. Founded in 2008 the band has one EP and a debut full length, "Nil", released in 2012. Prolonged songs with a huge slab of tar like doom are what this band are about. The darkening comes from the blackened hues that entwine into each tune through the vocals and occasional guitar riff.

Opening with 'In The Hood Of The Clan Of Tombs' the tune is a seven minute monolithic gorging of bitumen covered funeral styled doom, where the pace is torturously slow and the vocals listen like a ghoulish voice within a night terror during your sleep. This kind of music, like W.A.I.L., Swallow The Sun or Dragged Into Sunlight is steeped in thundering dread via the crushingly slow riffs and seismic bass rumbling like a distant stampede ever advancing closer. Into 'Enshrined' and we get a truly claustrophobic atmosphere not unlike Triptykon where a demonic drawling vocal line hideously taunts the listener as that bass crawls and slides into every orifice imaginable. The tune has its lighter moments however when it delves into a semi-acoustic break that tip toes around some delicate bass and drum work. 'Instincts Of A Serpent' has a touch of Candlemass about it with a true doom riff pounding within the track alongside those grisly vocals which border a death metal tone at times. Again we get softer passages segueing between the more sonically dark sections and it is this aspect of the song writing I particularly liked affording the songs a chance to breathe occasionally under the suffocating dark oppressiveness.

The massive 12 minute opus of 'No Life To Bother' had me thinking about Katatonia's debut due to the riffing style and slithering speed and emphasised cymbal pronouncements. There is a heartbreaking sadness to this tune due to the riff and pace as the vocals offer theatrical nuances during the songs duration. Miserable, morose and possessing a dark sombreness "One Eon" is an auditory experience of unparalleled cheerlessness. 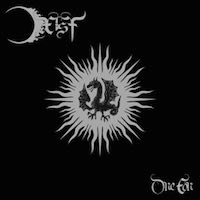