10. To Obey A Tyrant - Omnimalevolent

9. Spire Of Lazarus - Soaked In The Sands

5. Cryptworm - Spewing Mephitic Putridity
Hailing from the UK from a city near me dwells my number five on the list, a band none other than Bristol's Cryptworm. "Spewing Mephitic Putridity" is a dirge-Infested, riff hungry monster of a record. From its glorious artwork to its murky production, each track only leaves its listener wanting to get as grotesque and filthy as the songs themselves. The groove-laddened backbone of Cryptworm's sound is often what dissects them away from other sludge based extreme metal bands, as this record is sure enough a diamond in the rough.

4. Guineapig - Parasite
Guineapig have been on my music radar for a few years now, since their 2018 album debut of "Bacteria". And whilst that release was a great and fun goregrind record, the band have truly stepped it up a notch with this year's "Parasite". Everything from production to actual songwriting has been topped, and for a goregrind band to accumulate the interest they have and come this far is pretty much astonishing. Taking themselves seriously in a genre who's leading band only write about poo. Whilst using 50% pitch shifted vocals and effects, this only adds to the band's chaotic creativity on an album that won't fail to get you punching the air to every thundering, downtuned riff and watery-gurgled vocal hook.

3. Lorna Shore - Pain Remains
Of course by now Lorna Shore are on your radar, but what took you so long? Having followed this band since the "Psalms" album, it's unbelievable how far they've now come, and with vocalist Will Ramos' first album entry to the band, its no surprise at how well this release has done. Melody and symphony play an integral part in the band's focus, and that fused with menacing shrieks and bone-crushing breakdowns is no exception on why Lorna Shore have blown up in recent months. Whether you dig the band or not, you have to give praise for the efforts put into this band and how many new metal fans will get into extreme music from checking this out.

2. Acranius - Mercy Denied
Where do you start with Acranius? It's a tricky one, a band who have toyed with multiple genres in the extreme spectrum, who may have finally found their calling by hiring a second vocalist to enhance their core skills. Whether you're a fan of brutal death or hardcore, there's literally something on this album that will reach up and grab you by the throat. Infectious beatdown inspired elements fused with groovy bang-your-fucking-head riffs, and topped off with the best production on a death metal record you may hear in 2022 alone. Considering each release sounds completely different, I'm intrigued to hear where the band head out next.

1. Spiritworld - Deathwestern
I hope I haven't cheated with my number one album on this list, as technically Spiritworld aren't exactly an extreme metal band. However, how can I not talk about this band and their sophomore release "Deathwestern"?! You like riffs? They've bloody got them! Spiritworld basically fill the void that bands like Slayer have left, and added a pinch of hardcore brutality in the veins of Power Trip and Hatebreed. Not to mention their love for westernised horror thats crafted well between the records' sinister tracks and excellent album artwork. No album in 2022 has made me bang my head harder than this, and if you havent checked it out already, I urge you too. This Is clearly just the beginning for such an exciting band who will no doubt end up taking reigns of the genre in a matter of years. 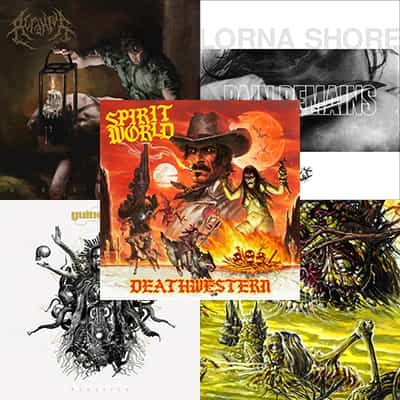