5m3? Well, that´s a strange name. What does it mean? 5 cubic meters? Anyway, let´s take a look at the history of these Dutch musicians. After releasing self-financed promotional CD´s in 2003 and 2005, “5m3” is the bands current output. It seems to be another self-financed one, but I´m not quite sure which kind of target audience was meant to be appealed, because there are so many different influences mixed up on this recording. With purchasing this one, you´ll get technical Death Metal, Thrash Metal, straight forward parts, various breakdowns, some faster stuff and also a lot of Metalcore orientated ingredients. One might say, this shows the versatility of 5m3, but keep in mind all inspirations are combined in every song. From my point of view, there´s a lack of a central theme on this full length album. The musical gush is completed by a vocalist who´s either delivering dark growling or some hoarse screams. So far so good - if you´re into strange and twisted tracks. But the real flaw on “5m3” is the weak recording quality. The guitars are sounding too clinical and too feeble and I can´t help but thinking of a mediocre production with a lower budget. Of course there are some albums out there that sound more shitty and more unwieldy, but this one´s pretty bulky for sure. Despite the exorbitant use of various styles and inspirations, it´s plain to see these guys know how to handle their instruments. Otherwise this output would drown in an even bigger chaos. It´s difficult to compare 5m3 with other bands, but fans of technical stuff in the vein of Cephalic Carnage or miscellaneous other wrecking crews should give them a try. The rating could have been better if the guys turned their attention on less inspirations instead of using a bunch of various styles to create this full length album. If you think you can stand this one - enjoy yourself. In my opinion, it´s just barely 3/5 points. 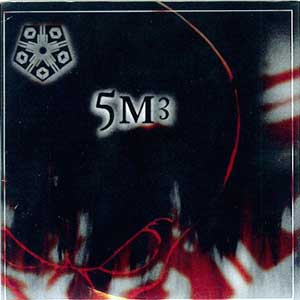