7th Nemesis was created from the ashes of Sarganas, a blackened death metal band. Nemesis is much more progressive than that, though one can still hear some traces of the death metal bits within some of the riff styles and the vocals. Overall one can consider Nemesis a modern groove metal band, but as their latest album- 'Deterministic Nonperiodic Flow'- comes to fruition, fans may be unsure as of what to consider the band. They take from so many different genres and mix it so well together that once again, for the third time, Nemesis refuse to be contained or fall into the crevice of a slump by trying to recreate an album. 'Deterministic...' is just as mind boggling as the previous albums, but features a slicker sound with an even more ferocious attitude. The album opens with "Distorted Mass," which at first sounds like an industrial ambient piece but quickly ramps up as a heavy, chugging groove metal track. The vocals are like a death metal scream or roar that feel like they belong in hardcore music, but are much more slowed down and even paced, which suits the music well. The guitars sometimes will break into a solo that would make melodic death metal fans proud and the bass even puts on a show, such as on "Legacy Of Supremacy." On "Seeding Devolution," the band goes for more of a grindcore output with a much needed boost to speed and aggression while, on the opposite side, "Legacy..." is much slower, almost like doom metal, but the vocals add more energy than melancholy.

"Reverse Engineering" is a bizzare track due to the industrial influences mixed in the background, making it feel like a Blut Aus Nord track within the latter's recent works. It's different and really breaks up the modern metal bits for a while when suddenly the veil lifts and the music just breaks through with some great rock oriented riffs and a few solos to boot. Speaking of rock music, "Sarcastic Maze" is a great example for adding the right amount of groove for a while before everything quiets down for some great percussive drum work before the metal side kicks back up again. "Random Ascension" starts off with a thrash metal styled sound by focusing on a single guitar and then jumps into a heavy, hardcore chugging formula with the vocals roaring, overlapped so it creates an interesting echo effect. Of course, leave it to "Ashes Of a New Era" for some true randomness. The music starts out as heavy as "Seeding Devolution" and then suddenly drops off out of nowhere for a few minutes of silence. Then, one can hear the samples of children playing while the keyboards and bass go for a very haunting, eerie melody until the guitars pick up for a great, epic feel with some spoken word samples and then the music explodes for a great short instrumental before slowly dropping off with some spacey keyboards amongst the other instruments.

Crazy stuff huh? Well, Nemesis really meant to go for a diverse album, and that's exactly what fans get. In a world of modern metal, this could very well be one of the top ones. 'Deterministic...' is thought provoking in both lyrics and music and really gives fans the best of the numerous genres they choose from without being too random or silly. For those expecting something along the lines of progressive metal like The Ocean or Between The Buried and me, they'll be surely disappointed. True that Nemesis doesn't focus too much on technicality and a blend of clean/ harsh passages, but they continue to keep a momentous energy going throughout the entire listen of the album. Their latest offering crushes, pummels, and intrigues, and is probably the best place to start for new fans of the band, along with enrapturing old fans as well. 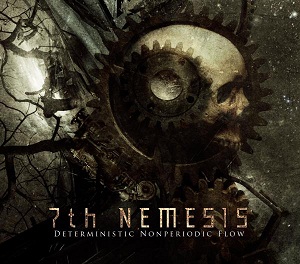 Self released
Reviewer: Colin McNamara
May 1, 2011
Next review: Ribspreader - The Van Murders