Abythic- Eden Of The Doomed

Abythic have been pretty quick to unleash their work ever since they brought forth their form of gritty, yet groove laden death metal back in 2018. After a successful third full length album just last year with some boundary pushing such as whalloping ears with a 14 minute piece of doom soaked evil, it feels like they’ve gone back to their roots and found a middle ground between lengthy and quick tracks with their EP “Eden Of The Doomed.”

These German death metal heads are prone to taking influences with Six Feet Under and Incantation and producing slow churn chugging riffs with filthy vocals but adding in a sort of catchy deathcore style chug to go along with it. New fans will find this EP as a good intro to the group, featuring plenty of interesting things to soak up despite it only being 3 tracks. Older fans who have been with them as far back as 2015 know what expect. ‘Revelation….’ opens with a bit of a lengthy opener, mixing doom and groove with death metal to build tension and then explodes with rapid mid paced riffs and churning drums. Vocals are a bit one sided in their grunt but have the oozing 90s touch to it in the vein of groups like Immolation. One thing Abythic does well is include samples or make their vocals sound like sample bits, such as the mob chanting style on this track. Others like ‘Conquest…’ include more horrific samples of screaming, German shouting, and overall a very hellish sound that complements the music well. The riff style of ‘Conquest…’ is more groove laden and more akin to the likes of Six Feet Under with its death n’ roll approach. While a bit repetitive, there is a lot of energy with this song and serves as probably the highlight of the album for its pit anthemic drive.

‘Victory in the Eden…’ uses samples still but is considerably slowed down like the first track. Almost more doom styled versus the speedier mid paced death metal fans might be used to, it carries more like an instrumental with the use of riffs, buried keyboards, and samples to drive the tracks with only a few minutes of death metal style vocals. While this might be the most ‘dull’ track on the album simply for its lack of energy, it shows the slower side of the group and still does a good job at enhancing the hellish atmosphere that is really shown in the second track, but not being too sample heavy. Abythic relies more on the guitars and drums to carry the track whereas it felt the vocals did a lot of the work in the first two.

Overall, the music here is solid death metal directed more towards those who like an old school sound or more of a ‘cinematic’ feel to it with the samples. While very short and like a mini chapter, it still shows that Abythic know how to balance sound and time, so fans of their older work will probably definitely enjoy this. For those who liked to see them push their epic proportions, they will probably have to wait until the next full length album to see if the group continues to head in that direction. 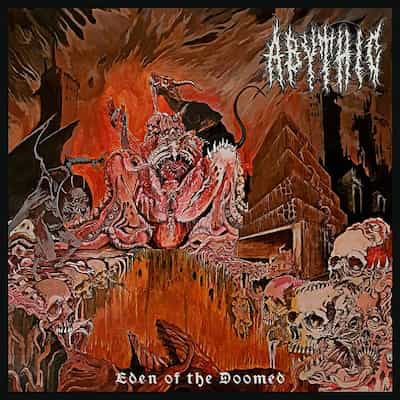 1. Revelation From The Great Vastness Thereafter
2. Conquest Of The One True Creed
3. Victory In The Eden Of The Doomed