Ancient Settlers, formed recently in 2020, demonstrate what a well rounded mix of influences from around the world (specifically the USA, Venezuela, Finland, Spain, and Portugal) can come up with. Ancient Settlers’ debut album is a mix of melo death metalcore, and the best comparison with them can be considered a cross between Killswitch Engage and In Flames. The vocal style which is mostly done as ‘rough cleans’ is the Killswitch part (which is more early “Alive…” and “End Of Heartache” era) with some of the riffs but mostly a lot of instrumentation will remind listeners of earlier/ mid In Flames (think “Clayman”/ “Colony” era). “Our Last Eclipse” has a well balance of energetic songs softened by a lot of electronica keyboard style, so while very mechanical at times, the overall organic flow of the music should really hit the spot for anyone who grew up with early 2000s metal that was when metalcore and melo death was fast on its rise with the likes of bands such as Trivium, Dark Tranquillity, In Flames, Killswitch, Caliban, Soilwork, Unearth, or All that Remains. ‘Into The Depths I Ride’ is about as close to Killswitch as one can get with the riff style opening the song and the rough vocals, though once the chorus hits and the keyboards are added, the In Flames influences start to bleed in as well. The music is fast and heavy with little room for atmosphere, though Ancient Settlers try to let the keyboards add as much as they can to it without letting the ‘core’ bits take over too much. Other tracks like ‘Cast in Gold’ showcase a bit more progressive bits, specifically on the vocals which finally shed their rough bark that tends to sound a little like overused thrash after a while and include some softer clean singing among the electronic bits, which actually works very well and it’s a shame they don’t use it more often.

The title track has some excellent riffs to get fists pumping in the air, and it really hits hard on the metalcore side since the slow churning sections are very much like ‘Alive Or Just Breathing.’ While the simple structure may seem a little boring compared to the previous track, it is very anthemic. ‘Cerements’ tries to add in some more electronics and melody, pushing more into melo death territory, especially with the guitars which show lot more like rather than focus on just hammering out power chords. The vocals are still mostly that rough bark, but near the end there are some spoken word parts to mix things up. As the album progresses through the next several tracks with ‘Jotnar Magick’ and ‘Silent December’ the band feels to depart almost completely from the melo death area and focus more on the metalcore parts. There is still lots of melody in the riffs and the keyboard bits help too, much overall the sound of the music feels more like to fall back on that anthemic side of Unearth or Killswitch Engage and compared to tracks like ‘Cast in Gold’ which showed a lot more promise and diversity they just tend to fall flat a little bit or sound too similar to each other.

‘Memories’ still rides that metalcore train but Ancient Settlers try to mix things up again finally by adding in some backing growls and what sounds like gang vocals used in hardcore bands like early Hatebreed or early Winds Of Plague or layered cleans during the chorus that dare sounds like 69 Eyes a bit at times (minus the overly HIM gothic tones). While the track isn’t the highlight of the album, listeners should appreciate the variety it tries to pack in, which might be a bit much, but after 3 tracks of close to ‘same ol’ same ol’ it is a welcome refresh. ‘The Black Rainbow’ finally sheds the speedier metalcore chains and jumps back to the more melo death territory with hard hitting riffs, deeper growls along with the clean snarls, and definitely more In Flames worship, but it has tons of groove and an awesome riff that drives the verses. ‘Peregrination’ closes that album trying to mix melo death and metalcore together, and the result is rather strange and new, which is good. Here while the song mostly relies on the metalcore riffing, the closing parts is very progressive, very melo death driven much in the vein of more Soilwork and Dark Tranquility with its rather sci fi, proggy bits, and serves as the highlight of the album as listeners who feel that the band might have been standing on its In Flames or Killswitch Engage crutch for too long on the album finally hear something rather new and not quite done by any of the aformentioned bands; it even sounds a bit like Opeth more than anything.

As a result, “Our Last Eclipse” goes out on a very high note. The music overall is solid melo death and metalcore and anyone who enjoys the early 2000s era metal bands will really dig it, though Ancient Settlers could have used more variety in the vocals and some of the instrumentation, given that almost every member is from a different part of the world. There is promise, and room to grow, so there is high hopes for these guys yet as they continue to bring back the early 2000s sound in full abundance to the metal world. 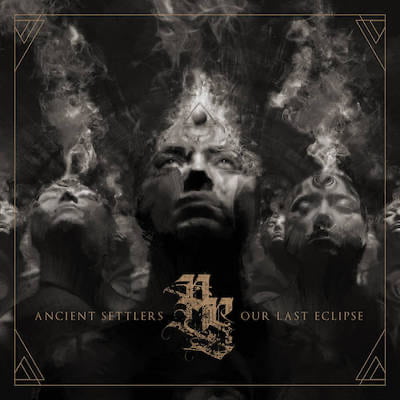