France’s Atrocia seem to have stepped up their game with their third album “Contamination.” Determined to not come off as a Vader clone, these guys seem to have added more death metal into their style vs the typical death thrash hybrid. With a new guitarist at the helm, one can really tell the difference between this album and the last. The music is more ferocious, more technical, and almost sounds like a mix of Torture Killer meets Defeated Sanity. The brutality is heard right off the bad with ‘Unleashing The Insurgency’ as the music leads in with some foreboding symphonics and just jumps right into thrash territory for a bit, but with the way arrangement of the drums and riffs, the music sounds a lot more death metal with groove laced; then the vocals come in and it is just overdrive. Other tracks like ‘Incorporeal Killer’ have some excellent technical riffs and still quite a bit of groove involved, but it is clear that whatever thrash formula they developed in their earlier days has become a bigger, badder sound that should be quite welcome by both thrash and death metal fans alike.

‘Monolith’ again takes the foreboding keyboard intro to build things up and then explode again into the more death metal style. Here it sounds like Atrocia pretty much forsake all their thrash roots and just go for a pure, churning death metal piece. While a track like this isn’t quite a fun as a groove laden one like ‘Corridors of the Living Dead,’ it does come off as one of the heaviest pieces on the album. ‘Iron Corps Icy Stalk’ is one of those tracks that one isn’t quite sure what to make of it. Starting out in slow churning groove death metal Torture Killer style and then exploding for some faster sections, listeners might find it a bit polarizing save for the vocals which stay constant in their guttural growls. Some parts are thrashy here and there towards the end, but overall the music is still death metal with some technical parts when it comes to the guitars. ‘Lies’ does the same, only mixing a healthy amount of thrash with the death metal to bring a nod back to the earlier sound of Atrocia. At least the chorus is very anthemic, and driving with its ‘Lies’ chant/ roar.

‘Curse Of The Two-Headed Queen Cobra’ is a bit of a predictable track, but also the most interesting. Going a more progressive route with the electronics and mixing thrash with a touch of Nile, listeners have a very Egyptian, but heavy sounding track that is that album’s highlight. The right amount of chugging groove, the right amount of ferocity for death metal, this one is surely a head banger to enjoy. Finally there is ‘Embrace the Venom’ which is one of the more epic tracks, stretching towards 8 minutes. Usually a lot of thrash pieces are about 3 to 5 minutes, but Atrocia add in a good mix of solos, technical death metal, and a dramatic outro to keep things interesting. The track is brutal and will hold interest all the way through.

Overall, the album is solid; not really a bad track or filler to skip. It look like 7 years was worth the wait as Atrocia show maturity and more prowess on “Contamination” compared to “Dystopia” which was released just 3 years after their debut. The sounds here are ferocious, yet enjoyable, technical, yet not dizzying. Listeners might be a little sad that Atrocia may have shed away a lot of their thrash elements in favor of the death metal ones, but the result is worth the listen for the full 43 minutes of music of just crushing, groove laden death metal with some hint of thrash in there. 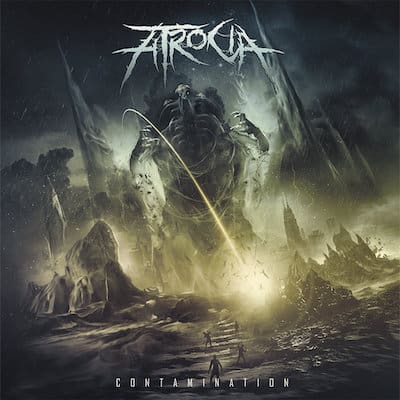