7 years later since their EP back in 2015, Australia’s Aviscerus finally unleash their debut full length for listeners to enjoy. Fans get a heavy dosage of melodic death metal mixed with groove metal in the vein of Darkane meets Truent for some rather mid paced simple, but engaging music. ‘Guidance’ kicks things off with a rather repetitive chug but plenty of melody. Unlike a lot of more modern melodic death metal bands, this is more your basic At the Gates style with no electronics, clean vocals, or much in the way of the progressive passages. Vocals are thick but discernable in their roar with the groove of the guitars being the main backbone of the music with the drumming and bass having their Lamb of God moments with that thick buzzing sound but not sounding too overdone or driving too hard to get the musical point across. Almost instantly after though listeners are surprised with the rather melodic, atmospheric ‘Depths.’ It is the only brief track on the album that sounds like this, so while the song broadens the horizons of the band, at the same time it also feels like a filler track that doesn’t quite mesh with the rest of the album. ‘It Lurks’ picks things back up again though with another slab of faster, groove laden melodic death metal with some hazy distortion but more variation on the vocals with a bit of that Black Dahlia Murder screech to them. Even some of the chugging riffs along with the vocals can be considered a sort of deathcore style, like older Within Destruction. One thing is for sure about Aviscerus: they know their groove. No matter how ‘basic’ the track gets one can’t help but feel that infectious headbang instinct.

For those looking for some excellent groove ‘A Rare Breed Of Catastrophe’ is a simple chugger without as much melody as some might want, but the whole ‘death n’ roll’ factor is still very enjoyable. ‘Animus’ kicks things up a notch with more of a straightforward melodic death metal track with less groove, so this one is louder, but solid all around and sure to start some pits vs. just the standing and headbanging that the other tracks incite. ‘Sightless Eyes’ has more melody to it and a bit more Darkane influence, but it is the guitars that really shine here as while the groove metal driven tracks focus on rhythmic chugs, the melo death influences really show in the solos which carry on for more than 15 seconds for once. A little slower than the others, the energy of the music is kind of a standstill as listeners won’t be sure if they should headbang or start moshing, but the beauty in the instrumentation is there nonetheless. For those looking for just a thick, meaty groove track that screams riff city, ‘Amidst the Crushing Currents’ is another instrumental that feels more at home with the band. Repetitive, yes, but the drums have more life to them amongst the riffs and even a little more jazzy technical touches rather than just power chord slams.

‘No Reprieve’ features some more impressive drumming and a little bit faster groove along with the Archspire inspired vocal delivery, and is another highlight for the album with its melo death/ groove metal infusion. Finally there is ‘Scorched Plains’ which is a little less groove metal oriented and more one’s straightforward mid paced death metal with some melodic elements. Heavier than some of the other tracks with those Amon Amarth touches to the riff delivery, this one is definitely a slow headbanger, but picks up the end with the jarring solos and shrieking vocals, so it closes on a strong note.

Overall, “Visceral Depths” is a simple but fun groove driven ride. Aside from the odd instrumental it is very hard not to like this album for the song structures and overall head banging vibe it gives off. A solid debut for Aviscerus with plenty of stomping riffs, not too much speed, and enough elements to enjoy for those who are just getting into metal or have been fans of the genre for years. 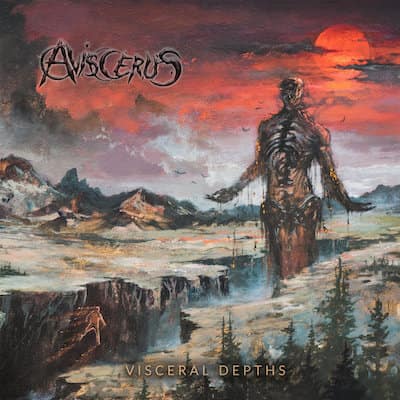 1. Guidance
2. Depths
3. It Lurks
4. A Rare Breed Of Catastrophe
5. Animus
6. Sightless Eyes
7. Amidst The Crushing Currents
8. No Reprieve
9. Scorched Plains