Barbarian Prophecies have been around for a while (almost 21 years) so despite only have albums about for about 11 of those years, they’ve got quite a cult following and a lot of expectations to live up to. On their fifth full length “Horizon” this Spain based group change things up a bit by going in a more progressive direction, but still retain that heavy blackened death metal sound. The female vocalist can still growl as good as the likes of Arch Enemy or Venom Prison, and while not quite on the guttural range of Cerebral Bore, she still delivers an impactful delivery that doesn’t feel broken or jarred. Tracks like ‘Alpha’ and ‘Phi’ have that healthy mix of death metal riffs but breaks things up with the slower progressive interludes much in the vein of Entheos, and while not quite a technically driven, shows Barbarian Prophecies can do more than just sling riffs and snarl, even with melodic fashion. ’Among Us’ is a bit more straightforward death metal but still melodic death metal styled in the vein of Amon Amarth with pretty standard growls, speed drums, and excellent thumping riffs that are very anthemic.

The black metal elements seem a bit more restrained in this album compared to previous releases; tracks mostly seem to dominate a very Arch Enemy style of riffs and vocals when it comes to tracks like ‘Supreme Vampire’ with thrashy elements mixed in. Oddly enough it sounds like the black metal bits are more mixed into the more progressive tracks, such as the rather melodic mid era Dimmu Borgir riffs etched into a track like ‘Morte Negra’ or ‘The Sign.’ Other tracks like ‘Psi’ are more death metal driven but add spacey elements and tones to bring more of a sci fi feel to the album, which sounds a bit out of a character for the group, but these guys and gal have always been pushing boundaries with their music; it just sounds like they are really stretching for it this time. While the closing ‘Omega’ is a little bit of let down as the band seems to restrain themselves in their progressive elements and deliver a more straightforward death metal track, the melo death qualities are still kicking hard and deliver a solid ending. Although ‘Ubermench’ has more biting riffs and probably would have been a better song to close on.

Overall for Barbarian Prophecies this is some of their best work. The group has always been known for their progressive elements and thoughtful, introspective lyrics with their music but here listeners can really hear a more fleshed out version of their music without feeling too many comparisons to the likes of Amon Amarth or Belphegor. True, the Arch Enemy melodies still ring true to a lot of tracks, but for new fans especially “Horizon” is a good place to start. Loud, aggressive and yet varied enough, each track does a decent job of delivering a style of death metal that is unique and yet easily recognizable. Lots of more modern elements that take this group above the average 90s or 2000s brutal death metal or melo death band for a listen that is sure to help the band keep going strong in the future. 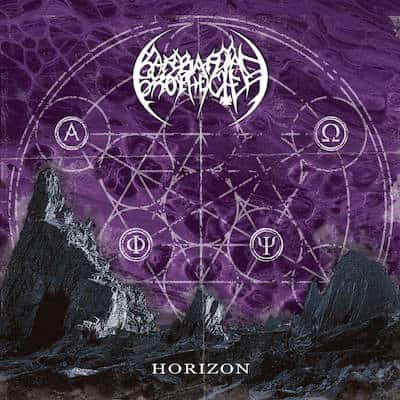