Belgium’s Carnal Desecration have been around since 2018 but are just releasing their debut full length in 2022. A rather brutal style of death metal that is a cross between Deicide and Bloodbath, expect chunky, fast buzz saw riffs, guttural snarls, and here and there hints of death n’ roll for some much needed groove. The faster tracks like ‘Suffering Eternal’ and ‘S-21’ are just downright ear stompers with that right blend of militant drumming, blast beats galore, and vocals that have the right balance between a snarl and a growl for a rather unholy sound that just shreds with no remorse. The real stand out tracks though are the slower, almost doomier ones like ‘Perennial Curse’ that just chug along with plenty of rhythm and a darker tone to the guitars. While not as quite in your face as some of the others, they still hit hard and seem to have a bit more life compared to the faster ones which feel more like a run-of-the-mill death metal piece.

‘Sacrificial Death’ is another stand out for its shift in guitar tone and more of a death n’ roll style, but the biggest highlight here is the drums. ‘Spawn of Dis’ is probably the most groove laden track on the album and while not the heaviest, features plenty of that ‘Chainsaw Lullaby’ grind to it that can be so infectious. Overall the album features plenty of tracks and moments to make any fan of mid to fast paced death metal from the 90s or early 2000s to really feel they got their time’s worth out of “Sacrifical Death.”

While it doesn’t break any new ground for death metal fans looking for something genre pushing, Carnal Desecration have a promising future ahead of them with their choice of music that features plenty of pit starters or just some excellent head bangers. 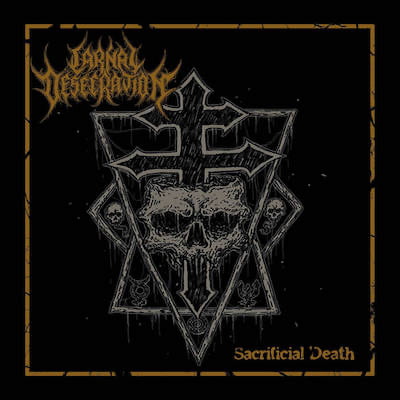