Still full of social injustice hate, Costa Rica’s thrash junkies Chemicide unleash their fourth full length album “Common Sense.” A pretty standard thrash album the group doesn’t deviate from their formula, so those who have followed them since 2011 know what to expect. For new fans it sounds like a cross between Toxic Holocaust and Slayer (even the psychedelic album art and logo definitely feels like Toxic Holocaust). The music is fast, very riff driven, and that mix of speed thrash meets punk. ‘Self Destruct’ pretty much sets the tone for anthemic, crushing music without much to deviate from what has been done before. Fast to mid paced riffs with barked, yet easily discernable vocals, and plenty of melody mixed in with the solos. Compared to some thrash bands who tend to just go for speed and a few good riffs like the way Slayer did on their “Christ Illusion” album, Chemicide try to inject as much life into their music as they can.

While a track like ‘Lunar Eternity’ and the title track tends to let down that expectation a little with a bit of repetition on the riffs and not enough variety in the solos or vocals, one can still appreciate the biting punk elements in its delivery. ‘Barred Existence’ finally breathes some more life back into the music with the almost synth sounding bass lines, slow yet melodic and warbling solos, and overall plenty of good instrumental moments that can help listeners overlook the fact that it sounds like the meat and potatoes of the riffs tends to just repeat over and over. ‘False Democracy’ does a good balance of speed thrash and groove with less focus on melody, but really amps up the loud factor as Chemicide really gets in ones face with the guitars, bass and drums, and sounds like they push the vocals back a little with their echoing, hollow tone. ‘Color Blind’ changes things a bit on the guitar tone for a darker introduction versus the standard thrash churn, and while the riffs are not the most creative, this is pretty much an excellent example of starter thrash to sink into for those who are not used to the genre.

‘Strike As One’ is a pretty anthemic piece that has the same driving vibe as ‘Common Sense.’ While it lacks the melodies and unique elements of some of the earlier tracks, it still hits pretty hard. ‘Disposable’ focuses on the drums that take a thunderous tone and hit hard, but not as hard as the punk driven ‘It’s And Action’ which is incredibly short, feels like a quick garage jam, but overall has a rather fun sound to it that shows that Chemicide have a sense of humor and aren’t quite all about the seriousness of violence and social injustice, although a lot of their tracks like ‘Common Sense’ and ‘False Democracy’ prove otherwise with some serious lyrics.

This is definitely an album for those who enjoy metal that has something to say and yet has a heavy, enjoyable sound to it versus something that is all serious and can take itself too seriously along the lines of groups like Exodus or Kreator. Definitely more for fans of the tongue in cheek that want to dive in the mosh pit in the vein of groups like NOFX, Suicidal Tendencies, and Toxic Holocaust. 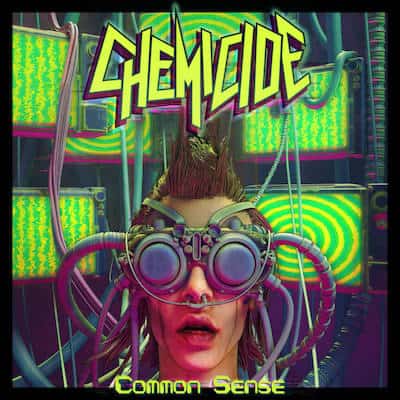