Dead Head has been around since the late 80s, and are still alive and thrashing to this day. Hailing from the Netherlands their seventh full length album, “Slave Driver” is one part late 80s Slayer and one part mid 2000s Legion Of The Damned. A good mix of death metal and thrash, but not quite signature like Vader from Poland does.

One can definitely be hear the Slayer influence in a track like ‘Acolyte’ with its riffs and guitar solos but also the death metal parts with how hard it hits, offering traces of the likes of groups such as Obituary, but overall the core of the music is certainly thrash. Others such as ‘Frequency Illusion’ are more the straightforward thrash track with strong solos, harsh vocals, and overall that biting punk attitude that a lot of the older thrash tends to carry. The tracks do tend to blend into one another though, which is a  bit of a pitfall, but thankfully the energy and fury never lets up, so there are really no soft or lulling tracks to give much breathing room for listeners.

Without these lulls or moments of slowness though, the album can struggle to keep interest. While the music here is pretty solid thrash, that is about all it holds a candle to. When compared to the likes of Exodus, Testament, Tankard, and many others who have been seasoned veterans in the genre for about as long as these guys, it becomes hard to really differentiate the sound. Tracks like ‘Southfork’ and ‘Polar Vortex’ build on very similar riffs but become hard to tell where one song begins and ends. It takes some chunkier, more melodic riffs such as on ‘Fear Scraper’ to really draw listener attention, and while this track is still very thrash driven, one can definitely hear that death metal thump to it in the main riffs with a bit more groove. It is darker, nastier, and a bit different from the other tracks, which is a good thing. Other times it just takes a really good guitar riff at the right time such as ‘Horrors Of Hades’ which just has something to its guitar driven melody, no matter how repetitive. It is very eastern sounding and still maintains a ton of groove. It features that ‘oomph’ that a lot of thrash heads desire and comes off more than just a ‘big 3’ knock off track.

Overall, this album is pretty standard for Dead Head. It keeps them up to par for what they’ve been doing ever since they started, and while no song is really weak, there isn’t really one that stands out either. Everything can be taken with a love it or hate it attitude.

Those who like thrash in general tinged with death metal will enjoy it for its driving anthemic power, but those who want a bit more variety or progression between tracks will probably get a little worn down halfway through the album. “Slave Driver” hits hard, but not enough for a painful experience, but don’t expect a “Seasons In The Abyss” masterpiece either. This album has teeth and groove for those who are willing to let in sink into their ears. 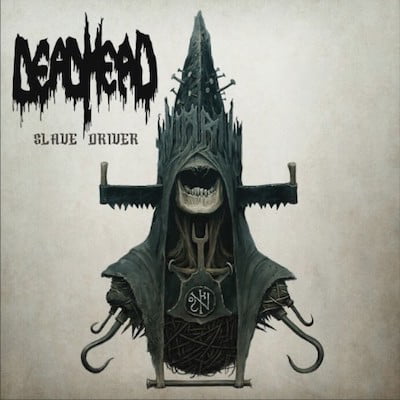