It isn’t very often one gets ‘collections’ of various artists here at BRUTALISM.com, but when we do they’re usually pretty interesting. What we have here is a split from 3 bands from Finland, all rooted in death metal, but some more experienced than others. For some this release is hot on the heels of the band’s debut, and others it is a welcome return after quite a few years of silence.

The first 3 tracks on “Death Over Ostrobothnia” is by Kompost who just released their debut last year. Their style is more of the gritty old school type of Immolation meets Cannibal Corpse. Speed is the name of the game when it comes to a head banger like ‘Sietoraja’ and will certainly sound like a mix of “Closer to a World Below” meets “Kill.” Even on a more mid paced riff smasher like ‘Katso pimeyteen’ with its dark solos and somewhat thrashy attitude, the music still hits hard like a hammer to the head and will appeal to the fans of more brutal death metal. There are even a few surprises like soft acoustic moments before the sound explodes again, so this group is certainly one to keep an eye on.

The next band to hear is Living Inferno who also recently put out their debut in 2021. A bit more of a blackened death hybrid, their sound is a little more ‘old school’ with the guitars, more throaty snarls versus growls, and adds a bit more atmosphere with things like bell chimes and overall a very kvlt, somewhat Belphegor sound to it when it comes to a track like ‘Hour of the Wolf.’ Others like ‘Babylon the Great’ stomp along with layered vocals, a rather mid paced churn, and just a very evil, blackened tone to it that isn’t quite as much as a pit starter as something Kompost would do, but their music is very cultish, anthemic, and still driving. Plus the solos are quite exciting to hear. Living Inferno seem to have a good balance between the modern and old school sound for some very dark, very driving music.

Finally the last 3 tracks are from Tormenticon who put out an album back in 2010 and then just dropped off the map. A bit more seasoned than the other 2, one can tell with their thick fuzzy sound that these guys are rooted in the old school death metal with a mix of Immolation meets Incantation with the fuzzed out grunts, buzz saw guitar riffs, and just a very hazy tone that will make fans of the older 80s/ early 90s death metal fans proud. The music is a bit mid paced and doesn’t quite have that overbearing drive to it when it comes to a track like  ‘Crush the Resistance’ so it kind of makes the listeners feel split in their feelings because they aren’t sure to headbang or start a pit to it, but it isn’t even close to boring. Other tracks like ‘Sumerian talvi’ have a bit more speed to it but still feature plenty of those Incantation slow doomy moments. Overall, they are probably the most ‘gritty’ on the split here, but go to show that they work well with the other 2 artists as each one is very similar.

While this whole album feels like a kick back to the late 90s death metal, “Death Over Ostrobothnia” is about 35 minutes of foot stomping rhythms that listeners are sure to enjoy. The more groove laden parts will stick with them the most while the more brutal death metal ones will just bludgeon to appreciation. 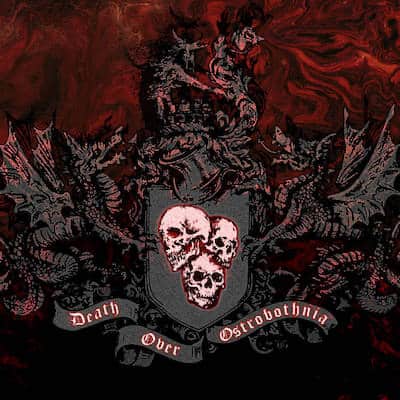