Decaptacon - For Those Who Died

For once, we are going to radically change country and musical style, out of my usual habit and path I give up Finnish bands in order to visit Germany with a new one, stamped melodic death metal, which is called Decaptacon. This sextet with the particularity of carrying three guitars players gives us a second LP, five years after their last opus, entitled "For Those Who Died".

The band has like many formations gone through the vicissitudes of the global pandemic and despite line ups evolving over the past three years seems to have stabilized a formation on which it should be able to rely in the future.

What I have always appreciated with almost the majority of German bands, I have listened to through my forty five years metal music immersion, is that it is direct, punchy we know where we are going, why we go, it is no frills, no workarounds, straight to the point! Maybe their strength, their trademark, however it is always efficient and also pleasant to know what we will listen.

For those who would seek a possible connection with other productions, it will not be difficult to find a filiation towards Amon Amarth. Escaping all the classic platitudes of thrash or classic German heavy, the band resolutely turned to the Nordic shores and its hordes of hairy Vikings. Nevertheless, for my part, I prefer the original, it is always frustrating to have to look for originality and have difficulty finding it! However, it must be recognized that this will delight lovers of this specific musical style.

So typically, I think it is clearly a band that does not cause frenetic magic to the listener like so many bands but you have to see them live, the distilled music is made to be played and viewed in real conditions, with adequate sound power. For my part, I did not have the click while listening to the album except when I was able to put the volume by disturbing my neighbours. However, I saw a live extract and there it is much more telling. There, indeed all the compositions take on their full meaning but above all their full extent.

From the point of view of orchestrations, arrangements, mastering, not much to say or criticize, this type of musical style requires solidity and there are energy and power without any possible dispute. It is without being the most flamboyant, solid and effective.

The band has also opted for a production by its own means, which is to be noted and which tends to develop, either by choice or by necessity. However, it denotes a certain will to undertake and a courage to take charge of oneself.

So to what titles should the awards be given? The album is compact, dense and homogeneous, just an instrumental track which could seem anecdotal or even anachronistic two thirds of the way through the production but the whole remains very coherent and deserves to be awarded. We will nevertheless expect a little more originality in the compositions which are quite predictable.

Not to be missed if you are a fan and sensitive to Amon Amarth style, it would be a shame not to increase your collection of cakes by depriving yourself of the latest Decaptacon. 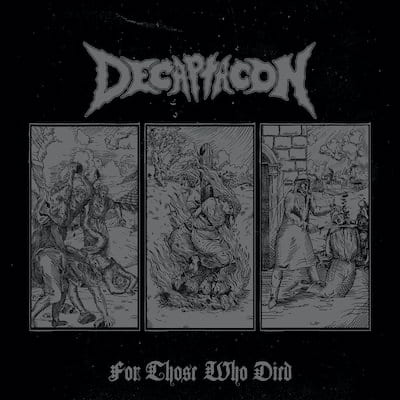