Djevelkult hail from Norway, the land of where black metal was born, so it is no surprise that their third full length album holds the mannerisms of chilling riffs, razor sharp vocals, drums like thunder, and corpsepainted affairs. However, like each album they’ve done before, they just tweak things slightly to avoid coming off as another Immortal or Dark Throne wannabe.

While a lot of songs on “Drep Alle Guder” are sung in Norwegian there are a few English tracks here to try to bridge the language gap. Right out the gate there is the title track that takes the furious pounding of Watain with a bit of black n’roll groove like Satyricon. The drums are probably the standout feature with their thick sound so much that they sound more like industrial beats compared to the typical sharp thuds that many black metal fans are used to (perhaps thanks to their new drummer they acquired in 2021). A little heavy metal guitar riffing here and there induces quite a bit of head banging and brings back “Rebel Extravaganza” memories from Satyricon.

‘Dodbringer’ has a bit more of an anthemic pulse to it much like a track by Khold but without as much groove to it. True the beat is repetitive but it shakes things up from the standard black metal fury that Djevelkult has gone for in the past. ‘Den Forhatte’ adds a bit more black and roll groove to it with the anguished vocal snarls; this is probably as close to Khold as listeners will get. Thankfully the track ebbs and flows between mid paced and fast so it doesn’t sound too dull as Khold is well known for crafting some awesome groove in their riffs, but tends to overuse them at the same time, so Djevelkult don’t fall into that pit.

‘I Kuldens Vold’ ends up going a different route versus the black and roll style with icy tones. Opting for a darker introduction that draws out with more melody and even some violin, this track builds to more of the speedier black metal that is heard in the likes of Dark Funeral or Watain, with just a little groove thrown in for measure. The riffs cut deep and overall the whole icy atmosphere can be felt in every pull of the strings.

‘The Life Destroyer’ is the first English track heard, and almost sounds like a shift from Norwegian icy black metal to almost more of a depressive U.S. black metal style in the vein of Xasthur meets Judas Iscariot (though not quite as fuzzy). ‘Voidwalker’ is a bit more of the same, focusing on less groove and more of the harsher elements of black metal. Unfortunately compared to what was heard earlier on the album it seems a little bland compared to the groove driven stomp of ‘Den Forhatte’ or the progressive touches of ‘I Kuldens Vold.’ However, it is also more a step back towards Djevelkult’s roots from their debut which was more of a raw black metal album anyway.

‘Fordommelse’ slides back more towards the depressive black metal vein of Xasthur with the tortured snarls, nonstop drumming, and dissonant mid paced riffs that churn along. The outro of the track also features some chanting vocals, a little more progressive notes from the guitars so that helps mix things up and bring back the exciting elements from ‘I Kuldens…’ ‘Perfect Obliterate’ brings things full circle with more of the black n groove elements of the title track. The drums are more thunderous and with the way the riffs and vocals are designed there is a bit of a Marduk flair to it, rounding out the whole black metal influence ensemble.

Overall the album feels like it tests new waters here and there but overall plays it safe compared to previous efforts as Djevelkult finally seem to have gotten comfortable where they are in sound but don’t quite want to sound the same throughout the next four albums like Dark Throne has done in the past. The Norwegian viking elements are the biggest surprise of the album especially regarding the vocals, despite how sparse they are used, and are a welcome addition to future work for Djevelkult to continue carving out their own sound in the black metal world. 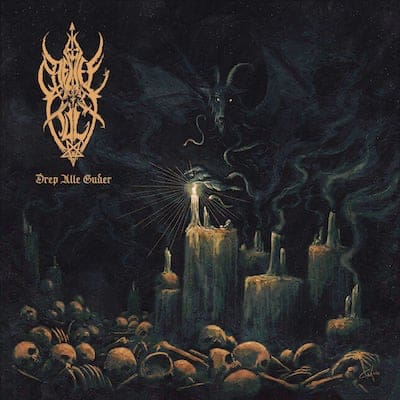