Entrails - An Eternal Time Of Decay

Swedish death metal veterans Entrails are finally back with their 7th album, out via Hammerheart Records.

Always faithful and devoted to the musical line that they have long since undertaken, the four Swedish guys release this "An Eternal Time Of Decay" which is sure to please all their old and new fans. This album certainly does not contain anything new but the Entrails know how to do their work and also very well.

After the instrumental title track that opens this work, the four Swedes' run-in machine starts at full speed with 'Die To Death' that will not let go of the listener until 'Open Casket Feast'. Fast-paced, multifaceted and monolithic rhythms will accompany us for the entire duration of the album. 'Dead By Evil' starts with a horror-style intro and in the end it will present itself, in my opinion, as one of the best and "innovative" songs of this album followed by the next 'Inverted Graveyard' which so much recalls riffs of the past...

Riffs in a clear Swedish death style, drums always present to accompany the dense plots of this obscure work in its slow and canonical pace. The voice of Penki is now a trade mark that alone is worth the purchase of this album. 'Possessed' closes this "An Eternal Time Of Decay", returning to beat with a song that starts in full speed, as if to sanction the concept that the Entrails are not yet ready to pull the oars in the boat (... "Are you possessed?!? .. Yes I am! "). Recommended album for old school death metal fans in general. 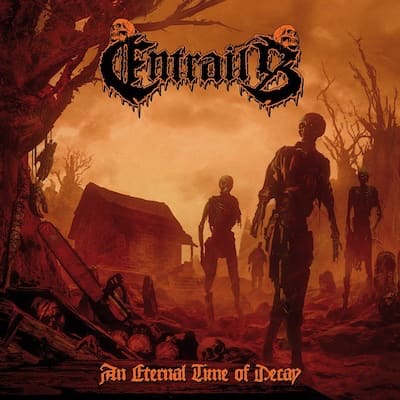