Exilium Noctis hail from Greece and “Fragments Of Apocalypse” is their debut album. A sound rooted deeply in the more 90s melodic black metal scene with references to the likes of Cradle Of Filth, Dimmu Borgir, and even Emperor, there is a certain balance of ferocity and beauty with the music. Utilizing ferocious riffs mixed with cello and keyboard alongside the typical rasping shriek and plodding drums, the overall result is a great collection of gothic inspired horror pieces that will make any corpsepainted fan proud. Tracks like ‘Desecrators’ are a little misleading with the soft intro and then explode into the more Emperor styled riffs with some backing keyboard and piano from Sigma, but it isn’t the best representation of what Exilium are all about. ‘Night Witches’ does a better job with the militant drumming, backing choirs, cello courtesy of Kayra and overall balanced marriage of melody and just sheer hellfire riffing supported by the raw vocals. Certainly a bit Old Man’s Child influenced, but on a less melodic level and a little more organic sounding.

‘The Coming Of Abaddon’ is a bit more Carach Angren styled with a touch of (older) Dimmu Borgir as it is one of the heavier tracks and flows less organically, but the snarls from vocalist Alpha go well with the biting riffs of Omega. Faster in every sense, those who are looking for a more Mayhem styled black metal will find this quite enjoyable and less fluffed. ‘Celestial Onslaught’ and ‘Crucify tThe Rats…’ are more of the same with their frantic yet melodic output but are restrained in their cello/ keyboard elements. There even seems a bit of Behemoth influence on ‘Crucify…’ with its rather raw output in the drums and guitar style, especially with the break in the middle of the track. Vocally, the band tries something a little different with the throaty singing which is a nice change form the typical black metal rasp, but overall the track lacks the beauty of the earlier ones.

‘Devouring The Carcass…’ is a typical black metal piece that will appeal to fans of the raw 90s style with very limited orchestral support, but still fires on all cylinders of the blasphemy level. Injecting a bit of that ‘Dusk…’ era Cradle of Filth, the sound is a little less clean and a little more ugly.  ‘Wrath Eternal’ takes things in a different direction completely, opting for more of the melodic black metal likes of a group such as Naglfar (and not just because Jens Ryden is a guest vocalist here), but the dual approach of both him and Alpha breathe new life into the music and elevate Exilium Noctis above the average black metal sound. A bit Immortal sounding, there is a lot of melodic groove to this track that will incite plenty of head banging, but not before mellowing out with some excellent cello and keyboard/ piano work. Closing on a somber note, it brings back the gothic elements that opened up “Fragments Of Apocalypse” and brings everything full circle.

Overall, those who like a more melodic black metal approach that is still furious and avoids the typical tropes of female vocals or too much in the lush sound of keyboards/ orchestras will find Exilium Noctis a fun and spooky album to enjoy. 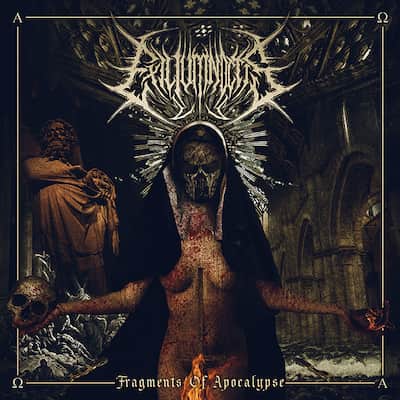