After 8 years of quiet, New Zealand’s Exordium Mors is back with their second full length album. 5 artists under monikers, these guys have quite an arsenal of music here with a mix of technical death metal, black metal, and even thrash. The album is full of depth and variation so each track is engaging with plenty of twists and turns with clear production and not much room for atmosphere or quiet moments. While the death metal elements seem a little restrained compared to the others, the black metal and thrash go very well together, much in the way Melechesh has their blend of Sumerian black metal and thrash. The opening ‘I Saw Oblivion’ features the technical death metal guitar work and some growls before mixing in the black metal shrieks and more thrashy elements. The solos are jarring with the drum work all over the place (in a good way). Pulling the best elements from likes of Death meets Exodus, fans will be impressed by the song structure. Other tracks like ‘A Pyrrhic Sacrament’ are more black metal and thrash based with some death metal vocal elements but pretty much is a fast headbanger. ‘Flesh of the Heathen’ is epic with the clean backing vocals and melodic black metal output; this showcases a bit more of their pagan side which can get a bit lost in the more satanic influenced tracks.

‘Surrounded by Serpents’ is about as black metal as one can get with a modern raw sound and the anthemic chanting chorus. Here the guitar lose a little bit of their technicality but they are fast with some melodic moments, but the drums seem pushed back a bit for a rather simple rhythm versus some of the erratic pulsing that was heard on a track like ‘I Saw Oblivion.’ ‘Crown Of Dust’ is a little deceiving because it starts out slow, but builds up quickly for some more melodic black metal. Another epic track, the big focus here is the guitar solos which have a bit more flair to them, almost in an Old Man’s Child sort of way, and the black metal elements are crisp but not overbearing with some of the thrash mixed in. By this point though it sounds like a lot of the death metal elements are gone or sleeping beneath the music, so fans might be a little disappointed with the lack of grunts in the mix. The music is still engaging though without it and by no means should be fast forwarded or skipped. ‘Torn Asunder’ is another fast ripper with more thrash elements added in and another variation of clean vocals, though these are not as folk/ heathen driven as the ones heard on ‘A Pyrrhic Sacrament.’

The album closes with ‘The Triumphator’ which again leans more heavily on the thrash side with some black metal elements. Thankfully the death metal growls are back, bringing all the musical subgenres together for a strong ending, complete with varied riffs, drumming, and a bit more of the technical side of Exordium Mors compared to the melodic black metal/ thrash that has dominated most of the album. Overall, listeners who are looking for something with speed and also melody with plenty of variation in the different genres of sound will find “As Legends Fade And Gods Die” just what they are looking for.

8 years was worth the wait as this album is chock full of something different each track while maintaining a core sound. Those who are looking for a thrashy sound that isn’t like Slayer or Testament or black metal that isn’t too dramatic with tinges of death metal will find 7 tracks they can dive into and certainly not regret. 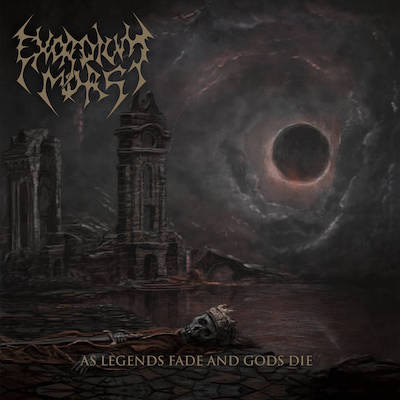 1. I Saw Oblivion
2. A Pyrrhic Sacrament
3. Flesh Of The Heathen
4. Surrounded By Serpents (I Am…)
5. Crown Of Dust
6. Torn Asunder (Damnatio Ad Bestias)
7. The Triumphator