Joey Veerbeek is the instrumental and vocal mastermind behind this pummelling, one man-band from the Netherlands. And whilst the title Goatmilker may come across more humorous than serious, its glorious outcome cements the project/band into direct attributes of the peers and influences behind Veerbeek's grand scheme.

This third album from Goatmilker stalks and grinds against religious themes, including callout-like lyrics devilish laughter, and even haunting bell chimes. Fuelled by an Entombed city of riffs yet vocals that sound like Carnifex and Ingested combined, each track exceeds the previous. There isn't much lacking that is relevant to anything modern in the world of death metal. And whilst it's definitely been done time and time again, there isn't anything negative about hearing another ridiculously heavy death metal album that follows several directions from all of the many sub-genres within - one that isn't afraid to throw in the occasional breakdown or the sludgiest riff you've heard since Frozen Soul or Sanguisuagabogg. This variation is the key to more doors for Goatmilker, and overall more opportunities like their peers are currently drowning in.

With a production bigger than most, and an album cover so fiery it's impossible not to catch the human eye, it's a wonder what Veerbeek will be able to regurgitate next, as this record delivers blow after blow of a crisp, modern death metal assault - waiting to be unearthed and digested again and again. 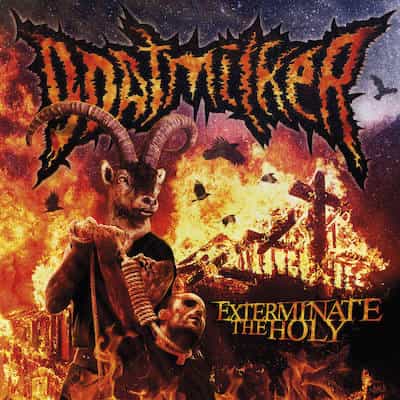 1. Let's End This
2. Unanswered Prayers
3. Familia Sodomiticum
4. Upon The Cross
5. Behind The Cellardoor 3
6. Just A Carpanter
7. Pathway To Oratory
8. Church Rapaciousness
9. Hang The Priest
10. Watchtowerwhore Abattoir
11. One Left To Kill