“Terrified Beyond Measure” is the second full length effort from U.K.’s Gorebringer and it hits just as heard as their debut. It is a little deceiving from the group name and album covers that this isn’t a brutal death metal group in the vein of the likes of Vehemence or Cannibal Corpse, but upon the first jump into ‘The Bottomless Pit’ one gets to hear that sweet sound of 90s melo death metal more in the vein of At The Gates or In Flames.

The band doesn’t hold back as the guitars and drumming are furious with the dual vocal approach of deep grunts and slightly more discernable higher pitched snarls. For those use to more modern melo death in the vein of the ‘hash verse/ clean chorus’ style like Soilwork or more progressive driven ones like Amorphis, this may come off as a bit too usettling with the focus of speed in the drums and guitars with very little room for ‘lulling moments.’ However, those who have been more used to the likes of Children of Bodom will find it very appealing (minus keyboards of course). ‘Man To Beast’ eases things down only slightly with a heavier focus on guitar solos while the title track opts for more of that mid paced chug with melody and more features from the higher pitched snarls much like “Lunar Strain” era In Flames. While the album might seem to get a little stale at this point with the tendency of the tracks to be a bit one sided with the focus on the vocals, guitars, and drums, there are at least a few surprises in store later down the line.

‘The Evil Ones’ is probably the heaviest track on the album simply for the drumming. There are even some evil sounding keyboards akin to mid era Old Man’s Child which will entice even the most stalwart of melodic black metal fans. Finally there is ‘Moon Circle’ which gives a shocking break from the chaos with less than a minute of echoing guitar strings before exploding into its counterpart ‘A Blackened Circle.’ While not the most original duo this break seems to segment into a shift from the heavier At The Gates style melodeath and more towards a Dark Tranquility style. A little more keyboard action is heard with more of a mid pace tone all the way through; the drums slow down along with the guitars on the riffs and the vocals really seem to take the lead along with letting more room for the keyboards to show their support for more dramatic effect. For those who miss the guitar action though there is the 2nd instrumental ‘Necro Mess’ that showcases some of the best instrumental work that Gorebringer has done today. True it sounds like In Flames all over again, it still brings back the energy of the earlier tracks that might have been lacking from the last several ones.

‘Flesh Feast’ closes the album with a bit of a departure from melo death. More in the vein of your straight up modern death metal with the riff structure one things that stands out is the percussive thunder of the drums which hits harder than the regular tappity-tap that tends to populate the album a bit too much. The guitar solos at least bring back the melodeath vibes in more of the olden Dark Tranquillity fashion.

Overall, the album is a solid second effort that brings more of the same to the table that the first did. Gorebringer do use the instrumentals to try to branch out a little more an show something different compared to their debut, but like a good Cannibal Corpse album stay within the safe waters of what they’re used to doing. The old school melo death factor will definitely draw in some listeners as it might be a break from the more modern frills of melodeath these days, for fans of early In Flames and At The Gates will surely find “Terrified Beyond Measure” right in their sweet spot for the sound. 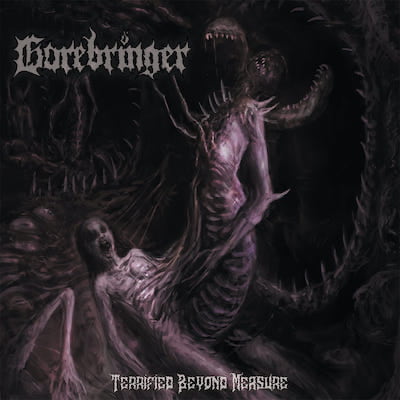