Hesperia are one of those one man black metal groups that no one really hears about, but when they do, get a very good impression. Headed by Hesperus, this guy has been doing music with this project since the late 90s, so he’s got a lot of traction behind his work up to album no. 7 with “Roma, Vol. II.” Originally released on CD by Hidden Marly Production but this is the vinyl released by Doc-Records.

For those who have been lucky enough to follow this guy, his black metal style presents a cinematic sort of history regarding Rome, very similar in the way that Ex Deo does theirs in a melo-death format (formed by members of Kataklysm). They all may seem a bit silly with their costumes and corpse paint, but when it comes to the music, there is no denying that the ones that crank out music that is varied with some historical accuracy to the lyrics (whether they are in English or not) are the ones that will stand out, and Hesperia is definitely one of them. While maybe not as commercialized as Ex Deo, the man has a formula and it works well.

Listeners who have been following Hesperus will be happy to know the epics are back. For the last several albums it feels like he’s been serving up slabs of the typical 5 to 6 minute tracks of typical black metal fanfare. Here on “Roma Vol. II” things kick off with a ten minute epic. Even it is broken into 2 tracks. Hesperus likes to make one feel like they are in the middle of a movie with his work, opening with a lot of orchestrations and spoken word parts before breaking out the black metal. Avoiding the typical Darkthrone or Dark Funeral approach, the music comes across as a mid paced black metal charge that is a cross between Saor and early Dimmu Borgir. A bit raw with the guitars and vocals but not quite drowned in symphonics, yet the sound is a step above just random keyboard additions. Sung in Latin and few parts in Italian, the language barrier might turn some away but the music winds and weaves between ferocious black metal parts and more Pirates Of The Caribbean score sections with the way the orchestrations are added in. It takes a bit for the music to take off, but when it does, listeners will be impressed. Other tracks like ‘Romana Italia’ are more the standard black metal track with faster guitar, burst of snarled vocals, and a very raw and nasty approach, but the guitars tend to break out into a more melodic format among the tremolo picking so it isn’t all evil before breaking into the more percussive drumming and some symphonic overlay.

Tracks like ‘Clades Galicia’ are the more cinematic side of Hesperia, trading guitar for cello, keyboard, violin, and percussion for the most part, adding lots of dramatic flair. The guitars come in eventually, but it just feels like a long melodic black metal instrumental with some Celtic influences, which is a nice break from the harsher tracks. Hesperus tends to weave these sorts of things in on the other tracks just not as much depth, such as on ‘Carthago’ which borrows the same symphonic lines for the interlude. He even tries his hand at clean singing/ layered chants on ‘Spartacvs,’ again adding more variation to the music aside from the typical black metal scream. The closing ‘Romanvm Imperivm…’ ties everything together, showcasing the full force of Hesperus’ skill to create long songs with plenty of melody but also a raging black metal track. It has a very Amon Amarth viking feel to the music even though it is far from melodic death metal. Overall, another great slab of historical metal without the commercialized feel of Sabaton. It is not the heaviest or soulless piece of black metal for 2021, but a sure win for those who like black metal with a cinematic feel to it despite a little repetition or recycled parts here and there. Hesperus continues the tradition of presenting solid history with a dark, yet melodic outlook. 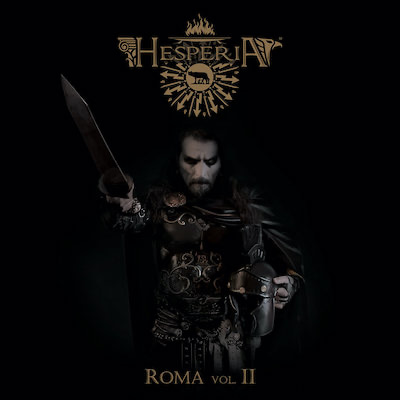