Humanizer are one of those bands that once you hear them you wonder ‘for how long these guys have been active why haven’t they done more?’ Active since 2008 with only 1 EP and 1 full length album in their discography, these Costa Rican atmospheric death metal heads are giving listeners a blast from the past as they combine their first EP “Humanzier” and full length “Divine Golden Blood” to a full length reissue. There is quite a bit of gap of time between both releases (about 6 years) so listeners will hear the difference in sound once the EP hits, but it goes to show just how far these guys have come, and begs the question again, why haven’t they done more?

They’re good. Not just because of the clean production and solid sound that relates to the likes of technical death metal from Necrophagist sometimes with the guitar work or the hellfire drumming or Archspire or the rumbling growls that sound like Septicflesh without the overuse of orchestra, but each track delivers something different while remaining solidly death metal. Groove is a huge factor for these guys too. It isn’t quite Jungle Rot groove but when hearing a track like ‘Raven’ or ‘Trinity’ it is definitely in the riffs. Bass tends to shine here and there but mostly gets lost in the drums, which tend to fire on all cylinders non stop most of the time that it can sound like a drum machine versus a human, but there’s plenty of variation. Guitar solos also tend to be a little Vital Remains-ish with how melodic they can get.

Atmosphere is mostly driven from the samples, which open with the title track that features chanting, screaming, crashing out what sounds like mountains and overall just a fantastic opener for any album (or show even). The bellowing at the end is a great way to get someone amped. ‘Raven’ features cawing and percussive beats with what sounds like throat singing buried in the background. ‘All Temples Shall Fall’ has sirens, more screams, and echoing spoken sermons. Then there are the soft quiet atmospheric moments such as the acoustic guitar on ‘La Gran Lid’ that just plinks along and sounds like just a foreboding break before the horn section and then just explodes back to the expected death metal. Humanizer also have their share of just well crafted death metal in general without the ‘filler’ as some people tend to call samples or interlude bits. ‘King ov Kings’ is just a solid guitar/ keyboard driven track that is mid paced and churns along much like an old school Vital Remains piece. There isn’t too much technicality or groove to it but the raw tones feel like it would fit right at home off an album like “Let Us Prey.”

‘Of Death And Grim’ is where Humanizer take simplicity and capitalize on a fantastic riff. It is slow, repetitive, but just an excellent doomy death metal piece that really lets the vocals bellow through and not feel buried or mixed up too much with the drums or guitars that tend to be in the forefront of a lot of the other tracks.

‘Betrayer Of Life’ is where listeners will hear the shift from full length to EP. The sound quality is definitely less; more fuzzed and the overall style of atmosphere changes. The keyboards are more abundant and overall these really do scream early Vital Remains. Here in its early stages one really gets to hear how Humanizer went from a near death metal copycat to more of a full well rounded, original sound, so while the last 4 tracks are not quite as engaging or up to scope on the progressive level as the first 8, one can appreciate the early attempt that the band made.

‘Done In God’s Name’ changes things up with the keyboards a bit by offering short, symphonic bursts rather than the long, dark and foreboding howls that At The Gates delivers, though one definitely gets more of an early Septicflesh vibe versus Vital Remains on the last 2 tracks of the EP. Choir additions may seem a little cheesy but still add a nice touch for the atmosphere that the group tries to go for. ‘Thus Spoke Zarathustra’ is a nice balance of groove and symphonic death metal, but with the fuzzy riffs it doesn’t quite have the impact that a track like ‘At the Gates…’ does.

Still, overall minus the sudden shift in production and sound one has a solid collection of musical history here with Humanizer. Their progression is right on track for where they look to be headed- somewhere between a cross of technical and atmospheric death metal, so hopefully they will get more recognition in the future and get another album out soon enough with some fresh material. Death metal listeners in general will find something on this album to enjoy, whether they like it brutally heavy or more softened up with symphonics. 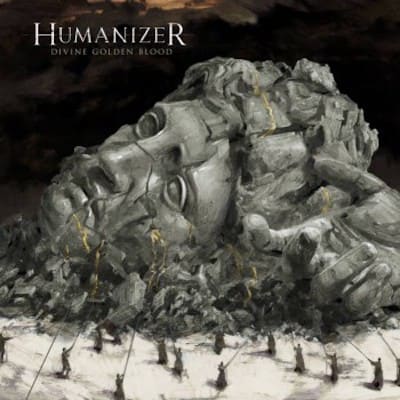