Imperium is a four piece technical death metal band from the U.K. and “Ex Mortis Gloria” is their third full length album. These days when one thinks technical death metal everyone expects insane speed (like Archspire) or crazy bass breakdowns and jazzy sections (Necrophagist). Imperium do deliver the speed but not at breakneck velocity and while the jazzy sections are lost, a lot of their technicality is more in their solos and guitar work overall.

In fact, after the dramatic symphonics of ‘Para Mortem’ one could think they were hearing Nile after a few minutes of ‘Through Gates Of Fire.’ Yes, there is a TON of Nile worship here with the way the riffs are structured (think “Black Seeds Of Vengeance” era) or guest vocals from Dallas Toler-Wade. So while Imperium have built themselves on quite a foundation of these death metal titans, at the same time they aren’t really carving a sound out for themselves either. The music is solid though, and that’s what matters. Tracks like ‘Seven Legions’ showcase the power of hard hitting death metal softened with some eastern interludes, but not on as grand a scale as Nile. Not to say that Imperium doesn’t have its moments; just hearing the solo on ‘Echoes Of Slain Kings’ is beautiful. In fact almost all their solos are beautiful, but then again so is Nile’s.

The band tries their hand at epic touches with the slow to build ‘Under Shadows Of Giants’ which lumbers along with some fantastic drum work; still very eastern sounding and a little bit more guttural than some of the more accessible tracks. If there is one thing that Imperium does right is they make the music very accessible compared to Nile’s earlier work, which was always a bit intense especially on the vocal side. Here vocalist Zach Jeter is a bit more discernable and can keep up with the guitar wizardry of Mike Alexander without having to ‘spitfire rap death metal’ vocalize the way that Archspire does. The track does linger on a bit without much of an interlude or break, so some listeners might think it drags on a bit much. ‘Burning Crucifixion…’ is brutal in musicianship and lyrical content, creating a desired marriage of music that fans of Behemoth would be proud of. ‘Blood On Seas Of Black’ slows things down a bit with a bit of groove mixed with the technicality; it is pretty standard technical death metal piece without a wow factor, but can be considered the bread and butter track of the album to show Imperium’s craft.

‘Forged In Treachery’ sounds more like a betrayal though to close the album. Forsaking all that technical guitar wizardry, this is more the standard chug and growl track that one would expect from a group like Six Feet Under. Groove laden as hell, but listeners will be crying out for those solos long before the 3 minute mark hits. On the other hand, it allows drumming from Janne Jaloma to shine through with the chanting backing him. Sadly, bass work from Anthony Ridout is a bit lost in the mix on a lot of the music, and one thing that technical death metal fans tend to enjoy a lot is the focus of bass (thanks to the standards set by Necrophagist). Overall, fans of Nile are going to love this, and this is actually a good stepping stone for those who are trying to get into brutal or technical death metal because the band treads their feet in both areas. But, as far as wow factor or another element that makes these guys really stand out, there isn’t too much. “Ex Mortis Gloria” is a solid 48 minutes of death metal that is another pillar in the foundation of bands trying to be like the godfathers before them. 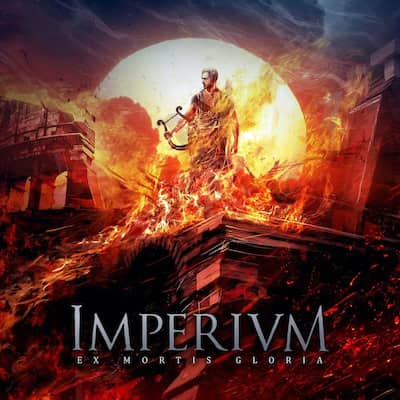 1. Para Mortem
2. Through Gates Of Fire
3. Seven Legions
4. Indignitas
5. Echoes Of Slain Kings
6. Per Silentium Noctis
7. Under Shadows Of Giants
8. Burning Crucifixions In The Garden Of Nero
9. Blood On Seas Of Black
10. Forged In Treachery