In Grief - An Eternity Of Misery

In Grief hail from Italy and recently have been active since 2020. Debuting with their full length “An Eternity Of Misery” in early September of 2022 this three piece doom band is very much like early My Dying Bride and Paradise Lost with a focus on harsh, snarled vocals, mournful melodies driven by guitar and keyboards/ violins with the support of funeral march drums. The album has its mix of short and long songs, but each one seems balanced aside from the instrumentals which serve as breaks versus fillers throughout the album.

Opening with ‘Beyond The Dark Veil’ the sorrow hits hard, carried by the vocals and buzzing yet clear riffs that certainly sound inspired from ‘The Angel And The Dark River’ by My Dying Bride. Bits of keyboard sprinkled throughout add a bit more beauty to the music, but violins are what will really grab listener attention in a good and bad way. They tend to get pushed to the front and don’t feel as ‘in line’ as the other instruments, but certainly add more depth to the music versus just a lot of guitar riffs and drums and vocals.

‘Ярна’ is a more lively and focuses more on the death metal side of doom, shedding a lot of the keyboards and violin for a whirlwind of guitar solos and overall a rather melo death charged output. It does slow down a bit at the end but this track pretty much provides the bread and butter core of what In Grief mostly sounds like.

The band does have some surprises here and there though. By the time ‘Queen Of Babylon’’ rolls around it feels a bit like In Grief is a bit of a one trick pony, which pretty much means listeners will have made their judgement for how much they enjoy or hate the album. Then ‘Demons’ comes forth and blows expectations out of the water. The band steps away from the typical death doom fashion and almost goes more for a prog doom rock outlet, clean vocals and all. A bit like what Paradise Lost did on the album “Host” minus the electronics, this is a welcome surprise that is much needed to vary up the album. While like the violins being pushed too much to the front, the clean vocals are a bit echoing and a little buried, especially when layered with the harsh ones, but they do help this become one of the standout tracks for the album.

‘Your Last Suffer’ (a bit of a play on last supper) is a quiet, acoustic interlude that showcases more of the softer side of the group before delving back into the heavy. But even in a track like ‘Dig Hopes’ which is heavy in the death doom fashion takes the acoustic bits of the interlude and spruces things up a bit rather than just being thick riffs and vocals all the time. And the choir additions on ‘Close to Insanity’ are gorgeous and when layered with keyboards will make pretty much any fan of gothic doom pretty happy.

The album comes full circle with ‘The Dagger, The Chain, the Scourge.’ An 8 minute doom epic that is very similar to the opening track, the band goes back to their slower roots, shedding a bit of the energy heard on some of the other tracks but keeping the well placed keyboards, adding in the (distant) clean vocals, and setting things up the acoustic outro which has a bit more of a whispery tone to it compared to ‘Your Last Suffer’ but the same somber beauty.

Overall, the album is solid death doom with lots of promise. While not quite a modern doom masterpiece like “Songs Of Darkness, Words Of Light,” “An Eternity Of Misery” captures just the right amount of doom and gloom pulling inspiration from the greats of the genre while adding their own flair to it. It takes the groove of Rapture with the harsh beauty of My Dying Bride and blends it together for a gloomy, yet enjoyable ride. 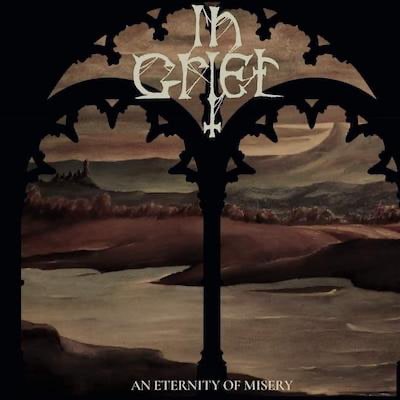