Taking listeners on a blast from the late 90s, Japanese one man band In Nothingness lands its debut with a strong mix of more classic melodic death metal. While not quite a modern masterpiece, the style of the mysterious ‘Lord Nothingness’ that has been doing this since 2014 invokes the styling of old In Flames and early Dark Tranquillity within the music from “Black Sun Funeral.”

While there is no lush electronics, clean vocals, flutes/ choirs or anything to really flesh out the backdrop, much of the songs are vocal and guitar driven. The drums sound a little odd and echoing for their tone, but it shouldn’t come off as a detriment to listeners as the 8 tracks of pure melo death roll by seamlessly folding into one another. There isn’t too much differentiation when it comes to a track like ‘The Garden Of Pain’ versus and ‘Shadow Of Grief’ with the acoustic opening before leaning into the more Amon Amarth inspired riffing with layered vocals that bounce between the deeper growls and more black metal styled shrieks. Listeners might feel it tends to make the album a but one sided, but In Nothingness really make use of the acoustic guitars for the lush melodic bits, which should make fans of old In Flames very happy. The real melo death elements come from the guitar solos such as on ‘The Moon That Never Rises Again’ which is a little slower than the others but has that extra grab from the guitar tones that mask the drums, so that can be forgiven.

In Nothingness tries hard to create an upbeat type of roar with their music, but at the same time sheds a lot of variety between the tracks so some listeners might feel the music tends to get a little stale after ‘A Nameless Grave’ rolls around. The track is still ferocious, but compared to more seasoned veterans like Dark Tranquility who have that balance of aggression and slower melancholy to really get the melo death feel to the music, Lord Nothingness tends to showcase only one side of the genre so far.

Then listeners are greeted with ‘The Last Autumn’ which is exactly the sort of melancholy that melo death fans have been needing. The drums shine through much clearer as well and don’t’seem buried with the rest of the music. A completely different tone- and sadly a short instrumental- this is as close to In Flames as one could get from the “Jester Race” era, but it sounds so fresh and exciting with the darker tone at first before it explodes into the more melodic, it just comes off as a great set up before the last track.

‘Black Sun Funeral’ is the highlight of the album. Screaming Dark Tranquillity all the way through, the artist showcases a balance of hard riffs, softer acoustic landings, and even some backing keyboards that have been missing from the entire album. While this is definitely some “Mind’s I’ worship here, listeners of the late 90s melo death will get the perfect track they deserve. It is just a shame there aren’t more like it here on the album.

Overall, Lord Nothingness puts out a strong debut with a mix of electric and acoustic guitar that showcases much more than the few tracks of the EP he put out years ago. The music here is more refined, yet still old school melo death to its core. While it doesn’t do anything that hasn’t been done by the more well known names of the genre, the melodic death metal genre is proud to have In Nothingness serve up something more classic when listeners feel the more modern melo death bands are pushing out something too rock oriented or soft and need a refresher on how hard the genre can go without being too overwhelming. 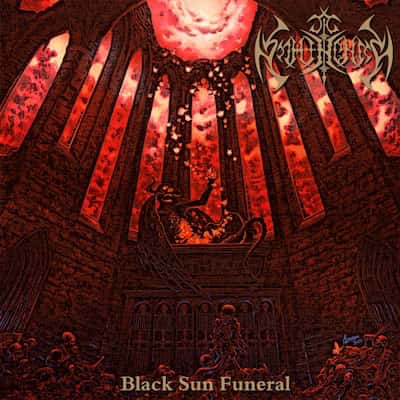 1. The Garden Of Pain
2. Sadness Is My Crown
3. Shadow Of Grief
4. The Moon That Never Rises Again
5. A Nameless Grave
6. Into Obscurity
7. The Last Autumn
8. Black Sun Funeral