Lesson In Violence - The Thrashfall Of Mankind

When dealing with an obvious of a title as “The Thrashfall Of Mankind,” one should know what to expect from Germany’s new-ish metal group Lesson in Violence. While their album art and title is pretty bold in stating they are a thrash metal group, the real question is which successes and pitfalls of thrash will they follow? Well from the opening track ‘Lost In Yourself’ it is pretty clear we get a mix of Anthrax meets Slayer meets Testament so that is a good point to start. The three pronged vocal attack during the chorus really adds energy and despite the rather simplistic lyrics, the band still makes it fun with the way they deliver it in their aggressive, mid paced tone. There isn’t too much in the way of speed thrash or grit thrash here due to the decent production so listeners should expect a pretty smooth ride throughout the album. ‘C.H.A.O.S.’ features plenty of anthemic moments and is sure to be a crowd favorite at shows, especially during the final moments of each chorus. ‘Thrash Metal Mankind’ is where the more punk thrash elements come in, though the focus tends to land on the vocals with the guitars bass and drums kind of just set in their one track mode which is a little bit of a letdown, though the guitar solo helps breathe some life into the track once it hits. Little bit of a darker tone overall, a bit Dio-esque.

‘Inside’ pulls things back to the more standard thrash standard expected from Testament and Slayer. Somewhat repetitive, but catchy riffs delivered at a mid pace with an excellent guitar solo to boot. The vocals also try a bit of variety with some more deeper grunts rather than the regular thrash bark. Then the album starts to plateau as a lot of the tracks start to sound the same. ‘Dissembling Wings’ has a similar chug and vocal approach as the previous track, but Lesson in Violence try to mix things up by adding in some more distinct bass work. ‘Liar’ goes back to the catchy guitar chugging riffs that made ‘Inside’ such a drawing track, but again the riffs tend to wear out on the ear a little bit by the time the second verse hits. ‘Social Madness’ finally breaks the Slayer cycle and delves more into Testament territory. Riffs are sped up, a little more of a death metal feel to it, more anthemic riffs, and overall just a more balanced thrash approach full with gang vocals and enough energy to really get a pit going. The only sad thing is it goes by way too quick.

‘Rigid And Stubborn’ despite its silly lyrics has some of the best groove the album has to offer and is probably the highlight of the whole thing with its building dramatic riffs. It isn’t the fastest track on the album or the heaviest but it draws attention with how well the riffs are crafted and the vocal tones that go with it. ‘Scum Of Society’ kicks things up a notch with the heaviness and falls more into Slayer territory with its ‘in your face’ attitude. Faster for sure it brings back that harder elements of thrash that fans enjoy so much. ‘Time To Kill’ has some of the best vocal work with the chorus and like ‘Thrash Metal…’ aims for some darker guitar tones to offset the somewhat cheesy lyrics, and the riffs again hit pretty hard making this another pit favorite. ‘Lesson In Violence’ closes things with a balance of the fun riffs heard on the opening track and aggressive vocal delivery. There is a bit of  viking metal drinking flair here almost in an Ensiferum way but without the epic or melo death proportions.

Overall we have a well rounded album that touches on some of the best elements of thrash though the grittier speed thrash is pretty much absent from the album, so fans who like the more aggressive non stop guitar work of a band like Melechesh might not quite find this album to their liking. However, those who like very obvious thrash lyrics and musical style that gets as close to the ‘big 5’ sound (Metallica, Megadeth, Anthrax, Testament, and Slayer) one can’t go wrong with “The Thrashfall Of Mankind.” It rocks, and the band’s career hopefully will progress with more varied thrash elements so they stay on top and don’t fall into the pit of going with too many repetitive riffs or song structures. 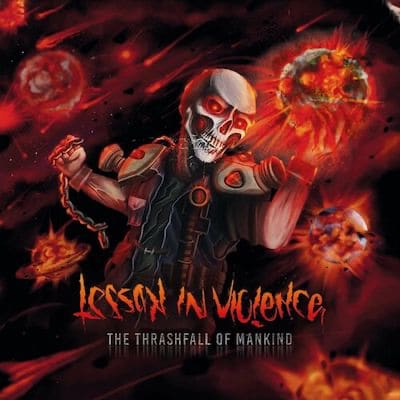