Mesentery has been on a bit of a hiatus for almost 10 years, and now they are back with a fresh, vicious attitude on their album “Soulfucker.” The music is somewhat of a cross between death metal and groove metal- listeners will hear traces of anywhere from Devildriver to older In Flames to Carcass in it. The melodic quality of the guitars keeps up with the harsh aggression of the vocals and drums and bass, though there are plenty of thrashy catchy riffs to get lost in. Tracks like ‘Soulfucker’ and ‘The Time Before Death’ chug along with fury but the pace feels mid versus a speed thrash. Vocals have a raw throaty bark and the backing guitar melodies feel right out of “Clayman” from In Flames. It is very groovy, very catchy and will certainly not bore anyone. 'Punisher' feels more like a standard groove track with death metal elements, and while melody factor is cut back upon quite a bit, the Devildriver style sound is definitely there with the focus on quite a few strong riffs that hit hard, but not so fast that it feels like the track just blows by.

'2025' is an excellent example of melo death meets groove metal with a hailfire of drum work and just a thick pummeling sound overall. While the melodic factor is subtle, the groove metal influences definitely shine here as one of the strongest tracks the album has to offer. ‘Inevitable’ and ‘Virtopsy’ offer darker tones, but at the same time their riff structuring doesn’t seem to vary that much so sometimes it sounds like one is listening to the same track. Compared to a track like ‘Punisher’ which has a bit more going for it with its style and pace, these two tracks might seem a little bland compared to the rest of the album. “Quo Vadis” is a very short interlude that seems random and could have been left out. But, the closing ‘Mesentery’ churns along with tons of groove, backing clean vocals despite being faded out, and features some of the best riffs of the album; very close to the rocking offering of ‘To Be The Odd One Cut.’

Overall this groove elements seem to overtake the melo-death ones, but this is still a fun album to hear. While it does definitely sound like a ‘slowed down’ Devildriver album, almost comparable to “Fury Of Our Maker’s Hand,” the slow churn riffs of “Soulfucker” are sure to incite plenty of mosh pits at live shows and if anything get a headbang wave going. The music crushes, and anyone who likes their thrash groove death metal hybrids will find this quite the ride. Some tracks may end up sounding a bit the same, but it Is still worth absorbing the full album to really get what Mesentery are trying to get across. 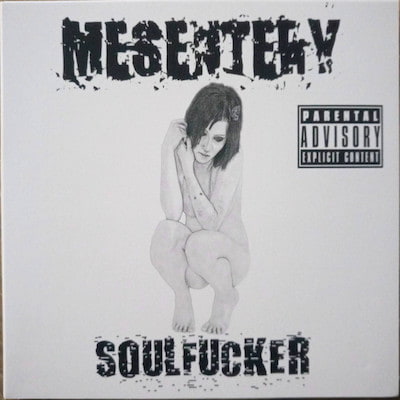