Even though Misgiving’s self titled album is their debut full length, these guys have been around since the late 90s. Formed in ’91 these France based death metallers have had a few demos and 1 split but not much else to really get them to take off, so to speak… until now. “Misgivings” is a strong slab of 90s death metal mostly rooted in a Deicide sound from the likes of albums such as “Legion” or “Insineratehymn.” Blistering speeds at one point and then filthy grooves the next, the music reeks of strong riffs and blasphemy, so get those horns up and dive into the abyss.

‘Deny the Diving Praise’ kicks things off with a bit of a lull before exploding into the aggressive riffs and snarled/ growled vocals that sounds like a cross between Deicide and Immolation. The production is pretty decent and not quite that buzzsaw fuzzy tone, and the drums have that machine gun march to them. As the album progresses on listeners will notice that Misgvings tends to stay on a one-track sound pretty much through the album. ‘Demonically Stigmatized’ and ‘Serenity in Shades’ have a bit more of a thrashy tone to them whereas ‘Stormblood’ is more of that straight up Deicide death metal style. While it is consistent it also makes it hard to any one track to really stand out.

‘Disgraceful Lust’ does slow things down a bit but only before a little bit. This is one of the more groove laden track but it doesn’t have quite as much variety in the riffs as a track like ‘Demonically Stigmatized’ does, but the slower pace does add more depth to the music. Then the music shifts a bit more back to the Deicide monotony with a track like ‘The Age of Christic Sorrow.’ Again, very consistent but difficult to make it stand out when tracks like ‘Serenity in Shades’ and ‘Supreme Regression’ all sound like they borrowed riffs from the “Insineratehymn” album and keep with the same pace pretty much with some solos here and there, but unrelenting in its god forsaken fury, especially with the drums. ‘Ancient Fear’ is finally a track that stands out. Trading full fledged speed riffs for atmosphere, a lengthy guitar solo, and just a very dark tone that makes the music sound more evil rather than relying on the lyrics and heaviness to make things sound dark and evil. Things eventually explode into the crushing typical death metal style but even here it sounds different, still more thrashy and groove oriented versus just straight up death metal. A little more Bolt Thrower influenced.

Overall, “Misgivings” is a strong death metal album, but one that feels like it is stuck in the past. The Deicide influences are extremely noticeable but that is about it. While this album could have been more than a tribute to their sound, Misgivings could have drawn on a few other influences of 90s death metal be it Cannibal Corpse or Hate Eternal for some more technical, brutal work. As the album blazes through it just feels a bit stagnant and one sided, somewhat in the vein of one of the more mediocre Vader albums.

Ultimately, if one is a Deicide fan, or fan of 90s death metal in general with groove mixed in, they will find this very appealing. But for those looking for progression or sludge churning grimness might want to look elsewhere for something a bit more up their alley. 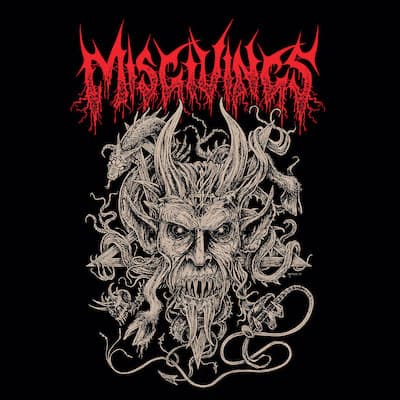