Listeners may not be aware of the 1999 name transition from Jugular Appetizer to Morgue Supplier, but this second album "Inevitability" in their newer name is the perfect blend between death metal and grindcore. A balance that few rarely achieve in such high regards, yet Morgue Supplier almost seem to achieve this with perfection.

'Absurd Identity' lures listeners into an opening clash of genre-bending wizardry and is most likely to throw listeners into a state of rapid confusion due to the band's lack of control of sticking to a formula. That is however until the first half of 'Closing In', which focuses less on the math-grind aspect and more into prog territory. The unique bass rhythm pummels across before slowly re-introducing the Cloacal Kiss meets Dillinger Escape Plan chaos that eventually emerges, revealing the band's true identity.

As if this band has a destiny to demolish and impress on areas of technicality and brutality, but not in that modern deathcore/death metal approach with a polished production. Instead, we're sucked into the netherrealm, thrown about by some demonic forces and eventually chewed and spat out before returning home just in time for tea. That's what this album is capable of making its listener feel. Whilst to some that may sound like a fun, risky roller coaster of a ride, to others this album could be torment; it's one of the bleakest sounding records to embrace my ears and many would become uncomfortable with the haunting vocal effects over a blackened metal backbone that fills the void with devoted gloom. Not to mention the record's sinister interludes that roam, and aid that creepy atmosphere.

If what's been said still hasn't put you off, then welcome aboard! As the tracks within may be more of a nightmare-ish experience as to listening pleasure, but if you're already familiar with the likes of Full Of Hell, Oranssi Puzuzu and Artificial Brain, then you'll most likely enjoy the extremities of "Inevitability" as a whole album. 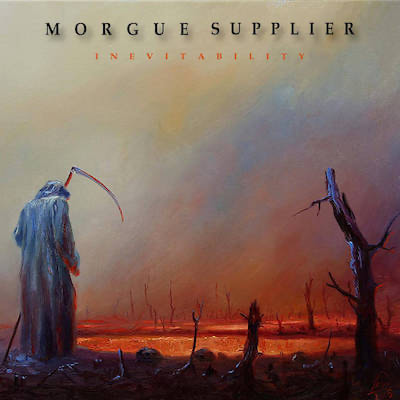