Five years have passed for Ósserp to release an album again, "Els Nous Cants De La Sibil-la", August 18th. A work that inherits the evil directly from the previous "Al Meu Pas s'Alça La Mort" from 2017. Ósserp was formed in Barcelona, Spain, from the ashes of several bands and from the beginning in their demos they have practiced grind, influenced by death, crust and other niceties. Their previous works are, EP: "Sota El Cinturó Dórió" (2013) and albums "Sang I Sutge"(2015), and the other previously named. A curiosity is that the lyrics of Ósserp songs are written in Catalan, a language spoken in that region of Spain.

From the first chords of 'Cavalcant l'Ossa Menor' we will notice the energy and violence of this band, even with a certain black metal atmosphere, they remind of the darkness of Arkhon Infaustus.

In 'Tot Crema' they will remind you of the intensity of Hate Eternal, with some really heavy parts and others very inspired, without losing a bit of their darkness and anger.With 'l'Engany' they start calmer but equally disturbing, knowing that evil is coming, here they also offer parts of intensity and black metal, all passion for the dark.

In "El pes del buit", it also begins in a calm and at the same time frightening way, in a slow and heavy way, even with some industrial touch, until the brutality arrives, here you can also see a similarity with the French Arkhon Infaustus, and the sickest and most funereal doom metal you can hear, mixed with the intensity of a death/black/grind in the most brutal way.

'l'Abraçada Del Destí' destroys you from the first moment with its fulminating blast beat, in the middle there is a more hardcore part, which is soon swallowed by the brutality of the beginning, it can remind you of Hate Eternal again, I know it is not the main one comparison or influence, but it is to get an idea of what you can hear.

'l'Home En El Laberint' is another example of how they can mix grind core/hardcore with brutal death, even providing notes of tranquility with a certain melancholy.

'El Rival Més Fort' is also a song with classic death metal essence in its beginnings, and when it enters the blast beat territory we go to the most extreme, without a doubt they know how to perfectly intersperse all their ideas.

To close this work 'Lluna Negra', which has a slower and heavier but disturbing beginning, with a good solo that gives way to brutality, in the calmest part you can feel the surreal atmosphere, the end has come.

This band has made a work that is going to hit, they know how to mix styles and influences, all within their particular universe of darkness grind/brutal death, the song of the sibyl has sentenced that the beginning of the end has arrived. 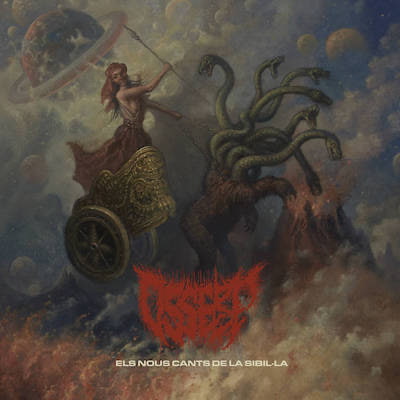