Patroness are a five piece group from Belgium and “Fatum” is their debut album for the metal world to hear. A bit of a hybrid there is black metal and doom with touches of stoner sludge, but all of it cohesively comes together for a rather unique experience. The music tends to pretty clearly state when it is the black metal or doom/ sludge, but not disjointed. The opening ‘Exordium’ sets the mood with the rather chilling industrial/ ambient noises akin to that of a group like Reverence. It is brief but effective. Then with ‘Undeceive’ one gets the more typical black metal styled riffs and snarled vocals mixed with quite a bit of melody and some cleaner shouts. It has some touches of doom in there but almost comes across more as melodic black metal overall. The more doomy parts come in with ‘The Art Of Being (Nothing)’ which drags listeners down a dark hall with much slower, foreboding riffs, and a far cry from black metal at all (unless we’re talking Shining). The vocals shift from their harsh snarls to more of a rough, sludge metal inspired cry that matches the tone very well and later shift to harsher tones, but overall one can definitely hear the doom and sludge influences much clearer here.

The doom elements seem to overtake a lot of the rest of the album such as on the epic ‘Seclusion.’ While the harsher black metal vocals are there, overall the song just seems to creep along like the previous one. A bit of the melodic elements is shed for more reverb on the riffs and in turn a much darker sound. The clean vocals are almost like Peter Steele from Type O Negative and the spooky vibe of the music enhances the atmosphere, but the harsher elements keep Patroness from falling anywhere near the gothic metal category. ‘Visions’ probably showcase the best clean vocal work for Patroness as they don’t get buried in the mix, balance the harsh vocals quite well. ‘Foreshadowing Oblivion’ softens things up as the band tries to go more for a focus on the clean elements and opt for more doom than sludge with the guitars rather than the faster black metal or long, abrasive sweeps soaked in distortion and carrying a rawness.

After a while it sounds pretty clear that this is the balance these guys are striving for as a lot of tracks tend to follow the same pattern- dramatic doomy opening followed by clean vocals, harsher interludes but a bit restrained in the black metal category, and very well balanced. ‘Crows Upon The Throne’ is the heaviest track as it lets the black metal elements shine through with the harsh vocals with some subtle doom elements in the backdrop but a definite shift from the more ‘quieter’ tracks that dominate the album.

The closing ‘Fatum’ is still pretty heavy, much like the opening ‘Undeceive.’ Almost death metal tinged with some doom elements in the riffs and the clean vocals here and there, the rawness in emotion from both vocal fronts. The drumming takes a more speedier lead rather than the monotonous thump that it has with the doom metal parts, and the bass of course is a bit more lost in the mix, but for those who wanted more bass moments can enjoy it on a track like ‘Seclusion.’ Overall, when one looks at “Fatum” as a whole, it pretty much boils down to a pretty basic formula for doom/ black metal with the sludge elements here and there but certainly not as prevalent as one might expect or have been used to from the band’s EP back in 2020. However, due to good production everything can be heard pretty clearly, and there are enough twists and turns between the two genres that listeners should not get bored with any one track. Even the introduction holds its own, though it sets up listeners for a bit of a letdown that the only industrial/ ambient elements are there.

Spreading more of that through the album might have enhanced the black metal elements more, as many might feel the album is 50% doom and 30% black metal overall with about 20% of sludge between a few tracks. Still, this album is a step away from the average norm when one thinks of either the doom genre with groups such as Pallbearer or black metal like early Agathodaimon. Patroness take simplicity and mold it together with a very engaging style that is sure to keep listeners for quite some time. 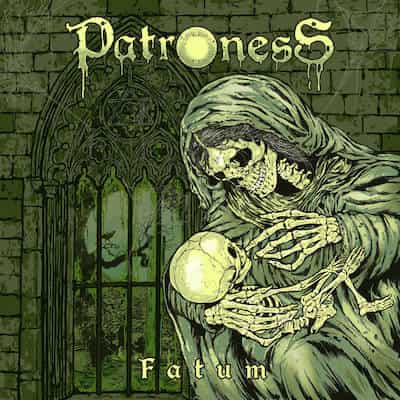