After a nearly indefinite hiatus, Netherlands progressive power metal group Reviver are finally back with their second full length album. The group originally split in 2006 just after the success of their debut, which was a pretty solid heavy metal/ power metal album in the vein of Judas Priest and Manowar. Now almost a decade and a half later they are back, but the real question is after such a huge gap in time and musical evolution, will these guys still have the chops to deliver a solid record or have it fall flat on its face? Well, “A Thousand Lives” does feel like a catchy title and very fitting after what felt like a thousand years of waiting for this album, and as far as the sound goes it sounds like right where they left off. ‘Kill The King’ starts off with the great heavy metal style riffage in the vein of Judas Priest and Manowar, but with a little more flair especially from the vocals in a more King Diamond style (but minus the ghoulish touches). Its very anthemic with touches of basic thrash and a little Bon Jovi with how the bridge just carries right along. ‘A Thousand Lives’ picks things up a bit faster despite the grounding heavy chug but in the vocals one can really hear the King Diamond influences. ‘The Fearless’ delivers another driving chorus and layered vocals with more of a ‘fantasy metal’ style to the riffs along with a little doom and gloom haunting bridge which really slows things down and brings the melancholy.

‘Hands Of The USA’ is a little bit of a cliché heavy metal track that capitalizes on the best of groups like Iron Maiden and Manowar, but serves as probably the ‘catchiest’ track of the album though it is not the most uplifting. ‘You Belong to Me’ finally changes things up with some proggy synth and slows things down quite a bit, opting for more of a heavy metal ballad with a vie similar to ‘Close My Eyes Forever’ done by Lita Ford and Ozzy Osbourne. There is even a dual vocal approach between singer Patrick Maurick and Charlene Wez, a relative unknown but with a promising voice in the metal world. Things pretty much pick up back to full steam after this track, making it the highlight and anomaly of the album. ‘Our Voice’ and ‘Shelter from Sorrow’ bring back the energy that the first few tracks had, but also a lot of the same riffage and style, so the heavy metal impact seems a little less as it sounds like we’ve already heard these songs before. The guitar solos are still gripping though and not so complicated they bury out the drums or have the guitars try to compete with each other too much. The mid paced riffs the music still sound more like Manowar with a touch of mid era Slayer, but Reviver still have plenty of chops that will make their older fans happy and hearken back moments to their debut album. 'Into The Tomb' has an excellent moment when its just the guitars and drums going in burst segments and while a little cliché with the eastern styled riffs, it brings some fresh elements in for Reviver.

‘Prisoner Of Faith’ is a little bit of a filler track as it sounds a bit too much like ‘A Thousand Lives’ and ‘The Fearless’ blended together without as much hook elements to really draw listeners in. It is the basic bread and butter heavy metal track with a fine balance but not enough to really ‘wow.’ ‘Tell Me’ closes the album with a bit more of a stronger grip factor by the choice of riffs. Having a good mix of faster and slower moments with a catchy chorus will surely make this one a fan favorite at live shows alongside the likes of ‘Kill The King’ and ‘Hands Of The USA.’ The guitar work especially has a bit more flair and life to it rather than trying to stick to basic churning riffs that would suit fans of Judas Priest but for a prog heavy metal band they needed something a little more, and this track delivers it. Ultimately, those who have followed Reviver for their short career and then their reformation in 2017 will be happy to see the original lineup going strong and that they’ve got plenty of tracks that don’t sell short despite many tending to sound the same here or there. “A Thousand Lives” is a very energetic album and despite the slower ballad which hits more emotionally then sonically, listeners old and new can appreciate this rather unknown band for their worth and expect a strong album no. 3 when it comes (hopefully not with another 10 plus year gap in between). 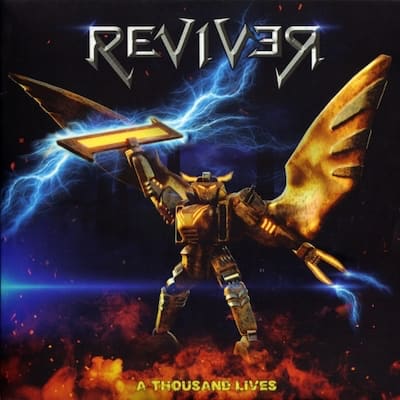