Scorn is a relatively new metal band formed in 2021 by Rob, Tony Guillaume and Manu. These French musicians already played in other bands and now have banded together to create a beautiful solid album called "Winds Of Torment". After loads of ideas and a signing with Great Dane Records ideas became riffs and riffs became songs. No time was wasted since they got together in the time-lapse of a year Scorn already had created their first album "Winds Of Torment". And with influences from Sepultura, Slayer and of course the mighty Gojira one can expect a solid death metal style combined with technical parts.

With a brutal tittle as 'Let Me See Your Blood' there is little speculation left about what the opening track is about, within the first minutes the mixture of technical and brutal death metal parts is already settling down in this song. One thing that is also noticeable is that the vocals and music are very coherent and they are very well locked in to each other. The track itself is not very long but that doesn’t matter because it makes up for that with sheer ferocity and brutality.

'Scorn' the shortest track on the album heavy, hard, fast and only eleven seconds long. The follow up is 'Winds Of Torment', it certainly has an interesting intro with an all out chaos drum fill and grooving guitar riffs. While the vocals are screaming and adding brute force to this song the drums and guitars are creating tight and interlocking musical parts. What I also liked in the track is that there is a kind of breakdown at the and of the song followed by even more coordination between the different musical elements, ending with a guitar followed by 'Winds Of Torment'. It makes sense that this song is the title track for the album because of the sheer brutality and coordination and even some experimenting. This is the musical way followed on the whole album and in my opinion that is what makes Scorn such and extreme metal power house.

With "Winds Of Torment" as your first album one should be proud of delivering such a musical performance. Although the inspiration from other bands is often heard it is the experimental factors in the guitar riffs and the combination on the drums that are really standing out forming the music. Having only one guitarist there is always a obstacle to overcome namely to not sound to empty, this is not the case with Scorn since the bass guitar is filling a lot of these gaps working on its own and together with the other members of the band. The vocals are also a very contributing factor with the brute and dry sounds it produces.

Because of all the reasons I have mentioned I think that Scorn is going a force to recon with in the extreme metal underground. Producing a first album like this is showing a potential and already makes me curious about the what they are going to produce in the future. "Winds Of Torment" almost get the full 5 stars but the band still has some minor issues to resolve like trying to get more dynamic in the music but again I’m still curious about the future of Scorn. 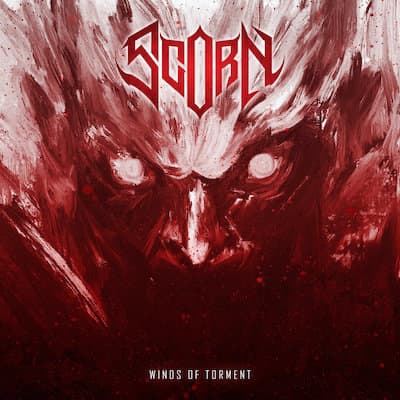