Selfgod is a one-man death metal group from Pittsburg, Pennsylvania in the USA. Headed by Serge Streltsov of Dreadeth and Haxxan, two more black metal tinged bands, this project allows him more to explore of his Slavic heritage and mythology and less of the more trivial anti-Christian/ pagan black metal tropes that the other bands do. Like a lot of solo groups the sound isn’t quite as stellar as a full on band, but it doesn’t sound like it was recorded in a garage with the door open either. Serge draws influence from his other groups but right from the start of “Born of Death,” his debut full length, one can tell this is definitely more death metal than black metal. There is a measure of technicality with the music, sounding like a cross between Kataklysm meets Paths of Possession. Vocals are throaty and guttural but seem a little slower than the rest of the music, like they are trying to keep up with it. They can sound a bit one sided without too much variation (mostly that thick grunt without much room for snarls or shrieks or gurgles). The keyboards add a certain level of melody to the music, but not too much. Drumming is fast and heavy, but in the background you can hear the fret sliding of the fingers, so that little clicking whine might throw some listeners off when the vocals are not masking it. Other tracks like ‘Svarogs Steel’ are more straightforward death metal, with more of the very early Vital Remains touch with the keyboards from an album like “Let us Pray.” Everything seems to blend more easily together and not feel as separated.

‘Morena’ changes things up a bit with a thrashy tone. Devoid of the keyboards and most of the melodic/ atmospheric elements, here we get a taste of Vader and a little more of the heavier side of Selfgod. ‘Cosmic Axis’ is a bit of a slow paced chugger with lots of fret action, but has its fast moments too. However, due to its rather repetitive nature, it comes off as probably one of the more uninspiring tracks of the album. Thankfully there are tracks like ‘Veles’ which have dark overtones, a good mix of pace and riffs, and bring back more of that solid melodic death metal vibe with some black metal elements (here we really get a bit more of the sound from Serge’s other group Dreadeth, minus the violins and folk elements). As the album closes out, one gets more of the sound that was heard on the first track. Heavy, fast to mid paced death metal with the vocals being a little slower (they do better on ‘Born of Death’ but again feel a little separated from the rest of the music with their un matched pace.)

Overall, Selfgod is an interesting project that shows a different side of Serge Streltsov. While it might not be as varied or in dept as a band like Dreadeth, it shows that he is an excellent guitarist and bassist, though his drum work seems absent (it sounds more like a drum machine was used) which is a shame because he does the drumming for his other group Haxxan and Dreadeth. The album could have sounded a lot more organic perhaps and more in depth if live drums were used (maybe I’m wrong and they just didn’t list the drums on Selfgod as part of his instrument repertoire).

Either way, for those who want more of a death metal approach that is mid paced with some melodic elements, then Selfgod is worth checking out. For those who were hoping for more of the folk/ black metal tinged Dreadeth, they should stick with Dreadeth. 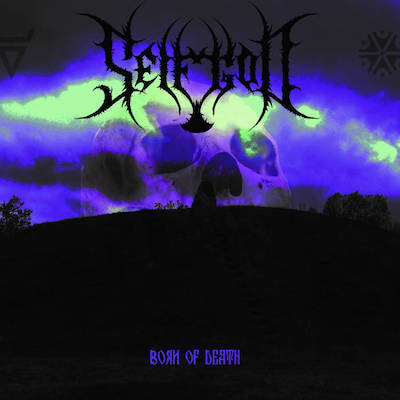