Pummeling death metal ever since 2013, it seems that with each release these guys from Austria get better and better with each release. Their latest effort, “Breed Death,” is their second release on their current home Lacerated Enemy Records and among many others like Kanine or Downfall of Humanity these guys know how to bring the fury. Ever since their debut in 2013 they sort of came off as more of a early Job For A Cowboy knock off, but with a few more albums under their belt it sounds like they’ve gone in more of a technical death metal/ deathcore route. Combining a sound like Whitechapel meets Soreption, listeners get some very straightforward death metal for 30 minutes. The music is solid with a few surprises here and there but overall right from the opening ‘Birth Through Violence’ one gets exactly what’s expected. The guitar work and drumming is certainly top notch with the vocals being a highlight, although from their tone they are definitely Whitechapel inspired with their guttural roars. The breakneck speeds are certainly less chuggy since the last few albums with a bit more flow to it rather than just stop and go stop and go all the time. Then there are other tracks like ‘Yersinia Pestis’ which is a bit more on the deathcore side with the churning breakdowns and a bit more of the chugging, but the guitars feature some pretty groove laden riffs that are very anthemic.

One thing Sensory Amusia has always going for them is groove and anthemic drive. Whether it is in the riffs or the songwriting overall tracks like ‘Parasitic Alteration’ and ‘Bind, Torture, Kill’ have that slow, one step mosh slam to them that can just drive a listener. It might not be as technically flamboyant as ‘Vulgar Thoughts Of Carnage’ but despite the repetitive nature of the music it drives the point home in just a very straightforward death metal/ deathcore way. Sensory Amusia also try to mix things up with the bree/ speed department on a track like ‘A Blank Canvas Of Flesh’ which is one of the darker tracks on the album with the layered vocals, jackhammer riffs, and a much more ‘no holds barred’ approach that was more appropriate on their last album, despite it being more of an EP. While there are some moments of slowness here, it never really lets up, so fans of the more heavier deathcore/ death metal will appreciate it.

The closing title track features some of the better guitar work on the album, and it is a shame they didn’t utilize it more on the other tracks. Drums come in with bursts and the vocals have that short bark to them at times in an Archspire way. Again, this is very straightforward deathcore/ death metal without too much variation, so when compared to the likes of groups like Vulvodynia or Mankind Grief there isn’t anything really new here. Sensory Amusia don’t quite bring anything revolutionary to the table, but for their own sake this album is probably the best they’ve done so far. Better production, better songwriting, and nothing too curveball to deviate fans who have been with them since the beginning. This is pretty much top notch death metal tinged with deathcore, so those who enjoy mid 2000s artists from those genres will find them exciting enough to get into a mosh pit over what they deliver here. 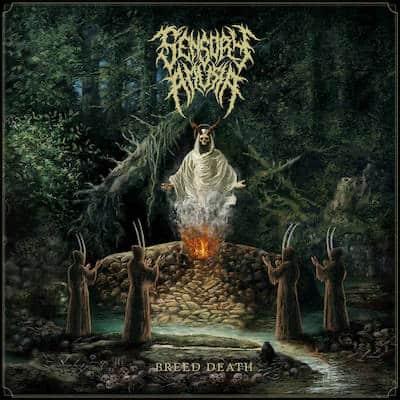