Serpents Oath ascend to the next level of their story with the 2nd chapter of the Lucifer rise to power entitled “Ascension.” More rounded out and diverse than their debut, the album shows all the promise a straightforward black metal fan should expect: icy riffs (but not quite Immortal icy) that cut like razors, thundering drums that hurt with precision, rumbling bass, and throaty vocals that are still discernable.

This Belgium based group originally was a 3 piece, so the addition of an extra guitar and bass makes the music feel much more whole and diverse. While there is little room for orchestral moments or choirs, Serpents Oath rely on their interludes to break up the album and add in atmosphere. On the previous album they used them a bit too much and lengthy; here they are more reserved, and though some are better than others for the atmospheric effect, say ‘Invocation Maledictum’ vs ‘Invocation Perversum,’ overall they enhance the evil aspect of the music. The music itself is more the straightforward hellfire black metal type that can be heard from the likes of Dark Funeral or 1349. The tremolo picking riffs don’t mask the vocals too much and the drums just punch their way through regardless. Some sections of the music are a little doomier than others, but the track (like many others) is fast to mid paced black metal.

Some tracks are better than others. ‘Thy Mighty Serpent’ has darker melodies and the vocals are a bit more diverse with the deeper snarls to compliment the higher pitched ones. The slower riffs seem to sink in better than the faster ones and this also allows the drums to just pummel with a fury that would make an artist like Frost of Satyricon proud.

While the arrangement does feel a bit like it has been done before, especially by Dark Funeral, Serpents Oath does their best to try to make it their own. But there are pitfalls to the black metal formula, especially when the opening riffs tend to sound the same. Between tracks like ‘Blaspehmy,’ ‘Bring Down The Sun,’ and ‘Sworn To The Oath,’ it becomes hard to discern which track is which. Thankfully as the songs set in Serpents Oath do go beyond the usual Dark Funeral/1349 worship and inject a little black n’ roll groove in with a track like ‘’Sworn To The Oath’ which sounds a bit more like Watain for its slower moments, but it really helps break up the music despite some of the monotony and helps the track stand out. It goes to show that Serpents Oath don’t need to be firing on all cylinders all the time to grab attention, which is what a lot of the tracks like ‘Of Fang And Claw’ tend to do, and listeners can feel a little lost in the music and might end up skipping around to find something a little different.

‘Death The Destroyer’ takes a more subtle approach to the music rather than charge out the gates guns blazing. While it isn’t nearly as groove oriented as some of the other ones, the arrangement is balanced to make it still sound grim and evil but with a bit more pull to enjoy versus just fast riffs over and over again trying to punch eardrums as hard as possible like older Marduk. Drumming is a little more broken up so it doesn’t sound like endless machine gun fire and the vocals are on point in their throaty snarls with their rage.

One thing that listeners can rely on for this group is the vocals; they never falter and hold their own without sounding too over produced or too broken and annoying. The closing track ‘Blood Moon’ showcases the band’s best work- slower, more melodic, and like an anthem of demons marching for Satan to storm Heaven. While it isn’t the fastest track, the more mid paced tone really gives fans a taste of what the guitars can do, especially with the almost acoustic outro that could have been used to greater effect on the rest of the album. While a bit more Belphegor than Dark Funeral, it seeps darkness and death while letting listeners enjoy the instrumental aspects without anything being left out.

Overall, “Ascension” is a step in the right direction, using the less is more rule for the interludes and adding new members to create a fuller sound. While the whole Lucifer story has been done a hundred times, and some more grandiose than others (such as Cradle Of Filth and Deathspell Omega), Serpents Oath deliver a B quality of a story/movie with their lyrics and presentation. Chapter 3 when it comes will hopefully be dramatic, darker, and full of angelic bloodshed for black metal fans to enjoy. 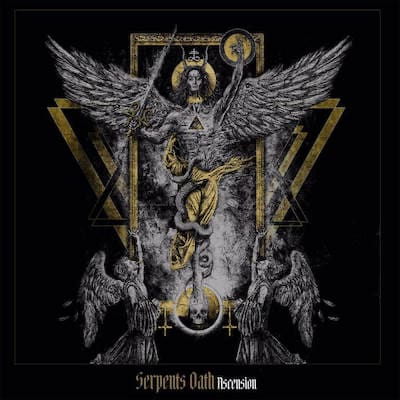