“Salvation Within Insanity” is the debut release offered up by the international death metal band Sijjeel, and by the sound of things, hell has been reborn and further deformed. Now, before I get into the actual music, I want to comment on something that caught my attention upon first receiving the CD. We all know that writing lyrics is an important part of the song writing process. This includes the songs titles as well. What you have here are some pretty well thought out song titles and lyrics to match.

Starting things off you have a song called 'Isolation Behind Unrealism'. Down a couple tracks there is one called 'The Affliction Of Deteriorated Minds'. A couple more titles are 'Departure From Human Nature' and 'Indignation Overcomes Me'. When I see song titles like this it piques my interest and draws me in to check a band out to see what they have to offer. There is absolutely nothing missing here except the monotony of shock value in song titles that seems to flood the world of extreme metal. Don’t get me wrong, that stuff is great and I love it, but it’s time for a bit of fresh air and Sijjeel provide it on a much needed intellectual level. I think this will appeal to a lot of older metal heads who are looking for something different lyrically.

Upon playing this CD, I was pleasantly surprised with the old school feel to it. I’m guessing the drums are triggered but they fit really well with the riffs which are reminiscent of old Gorguts and Suffocation. They really aren’t all that technical and seem to follow a brutality through simplicity way of things.

One thing that I notice about the music is that, between the tempo of the drums and the chords of the guitars, it seems to create a “groove” which adds a really cool vibe to the heaviness and overall brutality to the album. It’s the little things like this that are created with heartfelt intent hoping that the listener picks up on them and appreciates them. Most of the music here is at least mid-tempo with appropriately placed blast beats and slow sludgy parts to keep things fluent and interesting. The vocals here are pretty standard but standard is the best policy here.

The patterns chosen for this album compliment the music well and are as good as any vocalist in death metal bar none! The production on this release is pretty spot on. The thickness of the sound intensifies the overall feel of the album. A well done release all the way around. Fans of Sinister, Gorgots, Suffocation, Morbid Angel, Brutality, and Vital Remains should add this to their collections. You will not be disappointed. Once again, Comatose Music is knocking it out of the park this year and this release is one of the reasons why. 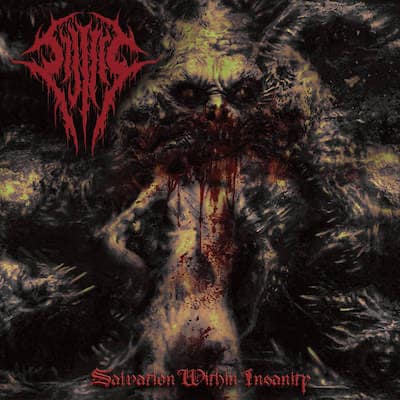 1. Isolation Behind Unrealism
2. Inverted Contentment In Salvation
3. The Affliction Of Deteriorating Minds
4. Mental Paralysis
5. Climbing Into The Abyss
6. Departing From Human Nature
7. Indignation Overcame Me
8. Inflection To Thee Smut