Silent Leges Inter Arma are a rather interesting black metal group from Germany, aside from their obscurity in the two band members’ names being just initials, but when one hears them they come off a lot more than just the average black metal style. In fact, one could easily consider these guys melodic blackened death metal with how well they blend the genres together. Think of it as a mix of Dark Fortress meets Dark Funeral meets Amon Amarth. The guitar speed and tones are certainly black metal styled with the opening ‘The Way of All Flesh’ but the throaty vocals have more snarl and growl to them compared to the expected croak or shriek of the black metal genre. There is more ferocity here, more bit, and more depth as a result. The vocals seem a bit layered, but not quite in the Arioch Funeral Mist haze of layered, and that’s only the tip of the iceberg. On their second full length album “Ad Plurs Ire” Silent Leges do their best to make it as varied as possible, capitalizing on new heights they haven’t before, and delivering track after track with something a little different and something different within the tracks themselves. Such as on ‘The Way Of All Flesh’ one hears the typical black metal tremolo picking and churn one might expect from Dark Funeral, and then later on we get a lot more melody and groove like one would expect from the darker, more gothic touches of Dark Fortress. Then there are the gloomy single picked strings and layered piano bits that really bring forth the melodic death/ melodic black metal elements on ‘Mourning’ that almost feel more reminiscent of Dark Tranquillity (minus the electronic and clean vocal parts), but the song just has LIFT. Like that grabbing depth that draws one in the way that Deathspell Omega can suck one in on an album like “Drought” because it was still at its core black metal but had so many twists and turns that one had no room to criticize anything sounding alike or too much the same. It just stood on its own, and Silent Leges Inter Arma show the two men can make music that really stands on its own with just the first 2 tracks.

‘The End Of The Way’ is a bit of a curveball as it sheds the black metal fury for an acoustic sounding interlude that is more folk metal than anything. Silent Leges have done stuff like this previously on their debut album, so it shouldn’t come as a surprise to those who are used to their music, but those who are new might find it as a bit of filler, but it comes off as more progressive and dynamic than anything else. ‘Irkalla’ pulls things back to the more typical black metal sound (and due to its speed and chock full of somewhat repetitive riffs might be the most ‘black metal’ track the album has to offer.) It does stand as one of the album epics, carrying on past 10 minutes so it takes time to digest, but unlike a funeral doom track that just crawls; this one chugs forward and keeps interest all the all the way through. ‘To Last Forever’ carries on the same style but toes the line a bit more with some melodic death ferocity. Even with the heavy chugging style of the vocals as they roar along almost in viking metal fashion, there is still plenty of melody to enjoy. And then listeners get a huge change of things: a track completely comprised of piano. While it is titled the same as the previous, the reprise sounds like a complete 180 from what was just heard. Sorrowful, melancholic, depressive, and nowhere near anything of what Silent Leges has done before, listeners get to hear some new ground broken for the duo. It is out of left field and note quite seamlessly done compared to how Shining delivered their piano and progressive orchestral elements on their “V” album, but this track is flawlessly beautiful. It might not sit well with most fans who like the music to be as aggressive as possible, but for those looking for something with depth and variety to push them out of their comfort zone, it is a fun experiment to hear the black metal version of ‘To Last…’ and then even sync it up with the piano version to see how well the two go when layered over each other.

Pushing their epic boundaries again the band launches into a closing grandiose ‘Descent to Hell.’ Not as subtle as ‘To Last Forever’ the song still hits hard on the black metal front by bringing in some of the good riffage heard on a track like ‘Mourning’ and closes on the somber piano again. The drumming takes a more varied turn with the clicking taps versus the full on blasts similar to the drum interlude of a track like ‘Crown Of Creation’ by Devildriver; it seems a bit out of ordinary for the band but works well. There are even some low, droning gothic clean vocals added in which work very well with the atmosphere of the music and sadly aren’t used more through the album. As a result, listeners are given a rather flawless taste of what black metal can be done when rooted in the core of some of the more established bands out there but then taken to a new level that really propels a group into its own niche. Here on "Ad Plures Ire," Silent Leges Inter Arma take more of a classical approach to black metal, avoiding the typical symphonic tropes that a band like Dimmu Borgir might take, or trying to get that evil shriek or snarl with full blown speed like hell coming to the doorstep in the vein of Marduk. This album is just pure genius, and well worth a listen for anyone who remotely enjoys black or death metal at all. Very well crafted, very well deserving for 2022. 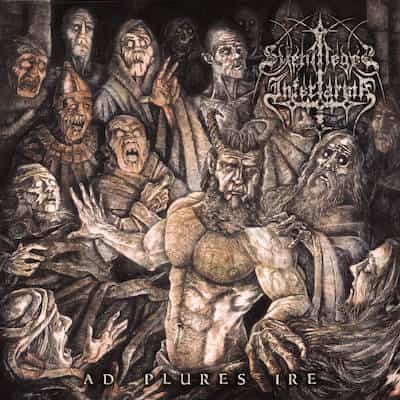