Slob grace us with their debut offering entitled “Deepwoods Shack Of Sodomy” and when you have a band name and an album title like this, how can you go wrong? While pushing the envelope of shock value, the band attack things head on with a veracity shared by many label mates, however, Slob seem to stand out from the rest in that they rely more on the beautifully depicted violence in their music. This is wonderfully transcended to by their song titles and album art. In a lot of bands you find that the heavier and more brutal they play, that’s what gets them in the door. Slob’s brutality is in direct accordance to the horrific torture and pain within their material. Nothing more nothing less. There’s no overkill here which adds that much more of a lethal touch to this release

Direct, in your face, and just plain nasty. This is one of the best bands and CDs I have heard so far this year. The intro really sets the mood here. It’s a rather long intro, but it warns you of the impending aural slaughter you’re about to endure. Slob takes a page out of Mortician’s book by adding a sense of dread into the mix, and it really pays off in the end. From beginning to end, this is sickeningly twisted and wonderfully presented for even the most critical of fans. The music is reminiscent of traditional death metal with grind and technical influences and even the solos contained herein play their own part in this blood-splattered slab of deviant darkness.

If you can’t follow along with the vocals, not to worry, YouTube sensation old man Tyree makes several appearances on this album through his many colorful and off the wall audio clips. For me, this was worth the purchase price in and of itself. As comical as these clips are, you can really feel a connection to the album. They really add to the backwoods theme of the material presented here. Finally, we have a band who uses samples that are actually relatable to the material they play! I know there are others like Mortician, but in t he grand scheme of things, I feel that the ratio of bands who use sample that are relatable to their music is not very high. In my experience a lot of bands will go for a shock value aesthetic when using samples. This here is just pure absolute genius! Comatose Music is responsible for the release of this awesome specimen of brutal death metal that takes a more direct and realistic perspective on the presentation of such a multifaceted form of extreme music. Think Nile mixed with Gorelord and Origin with a slightly more stripped down sound. 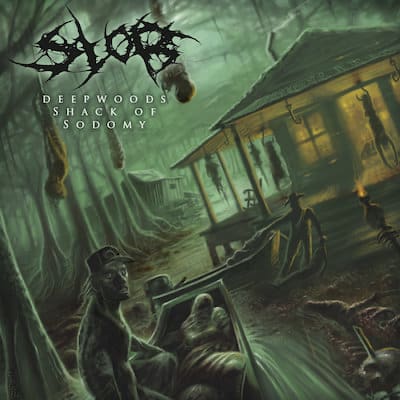